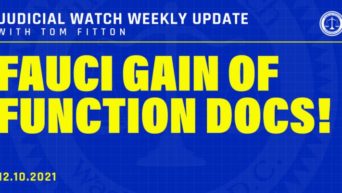 ANY way you scratch it, the worldwide pandemic lands at the doorsteps of several malignant actors, chiefly, Dr. Fauci, a/k/a Dr. Evil, the CHI-COM regime, as well as assorted nihilistic globalists. Incontestably,

AND now that the Gain-of-Function genie has long been out of the bottle, here comes the WHO — actually, an appendage of the CHI-COMS — with a sorta’ admission, albeit, only after the worldwide devastation has been unleashed!

GETTING back to Dr. Evil …. indeed, there is more than enough evidence to place him in front of not one, but several firing squads for his global wreckage, that is, aside from committing treason and mass medical malpractice within the U.S. Oops, he is already burning in hell-fire, never mind all the doppelgangers used as his stand-ins.

STILL yet, let’s trace-back the massive charge-sheet here — that which landed him in the cross-hairs of the White Hats to begin with.

ALAS, who, who, indeed, would ever rely on any so-called science coming out of Fauci’s lips — even if he was still among the living?? Rhetorical.

“Americans should all know this: There are no studies on children showing a reduction in hospitalization or death,” says Sen. Rand Paul.

A day before the FDA approved booster shots against COVID for children between the ages of 5 and 12, NIAID Director Dr. Anthony Fauci admitted to a Senate committee that there exist no data indicating that rates of hospitalization or death from COVID are lower in a child who has received a third vaccine dose.

“Dr. Fauci, the government recommends that everybody take a booster over age five. Are you aware of any studies that show a reduction in hospitalization or death for children who take a booster?” asked Sen. Paul.

“Right now there has not been enough data that has been accumulated, Senator Paul, to indicate that that’s the case,” Fauci replied, trying nonetheless to make the case for boosters only to be interrupted by Sen. Paul.

Senator Paul then noted that the only scientific support for boosting children is the fact that the booster shot creates antibodies.

He then asked Fauci if ten boosters should be given, since each booster produces antibodies.

“No, I think that is somewhat of an absurd exaggeration,” answered Fauci, only for Paul to retort that this is precisely the rationale geing provided by the government in its recommendation for boosters.

The senator also cited the vaccine’s risk factors, which include myocarditis and blood clots.

“So there is risk and there are risks, and you’re telling everybody in America, ‘Just blindly go out there because we made antibodies.’” pressed Sen. Paul. “So it is not an absurd corollary to say that if you have 10 – in fact, you probably make antibodies if you get a hundred boosters, all right? That’s not science, that’s conjecture, and we should not be making public policy on it.”

Fauci tried to respond by saying that there is “clear-cut clinical data” to support boosters for those over the age of forty – “But not for children,” Sen. Paul cut in again. “Here’s the thing: You’re not willing to be honest with the American people.”

Fauci, who has been vaccinated four times, tested positive for COVID-19 last Wednesday.

Fauci was being grilled by Senator Rand Paul (R-Kentucky) at a hearing of the Senate Health, Education, Labor and Pensions Committee.