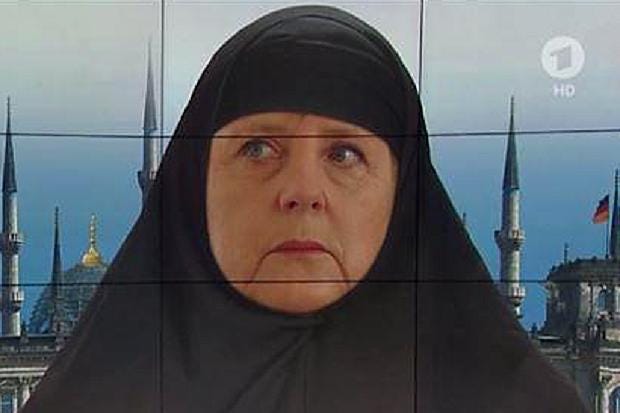 IF a perfect storm could be conjured up, trust, its ingredients would hardly be any more explosive than what is unfolding throughout the west; a frog-like boil submission into the arms of Islam. In fact, in Arabic, Islam actually means submission or surrender. Go figure.

THIS being the case, westerners who are loath to submit to pagan moon-god Allah must urgently come to terms with the creep-by-creep encirclement of Islam. Know that it will take place sans too many shots being fired. Yes, you read that right. For even with an uptick in attacks by Mohammedans, the actual danger does not come from the frontal direction, even though every effort must be made to preempt said strikes via strategic measures. Hint: shutting down their barracks within, their mosques, is beyond mandatory! In reality, it is a first step before it is too late. Resultant, the rest will flow from there. Hmm…think of it in terms of the trickle-down effect, or, conversely, the top-down method. Whatever works.

BUT, for now, first things first.

GERMANY, like it or not, is the largest national economy in Europe, the fourth–largest by nominal GDP in the world, and fifth by GDP. The country is a founding member of the European Union and the Euro zone, and with said economic weight leads the pack. In other words, whither Germany goes, so too does the rest. Free fall. But why is this even being mentioned?

WELL, as is known, all is not as it seems in Merkel’s Germany. Consider:

TO wit, as night follows day, it is under the above betrayal of western civilization that Frau Merkel, a non-reformed Stasi (totalitarian) agent, recently warned:

Chancellor Angela Merkel said that Germans have failed to grasp how Muslim immigration has transformed their country and will have to come to terms with more mosques than churches throughout the countryside, according to the Frankfurter Allgemeine Zeitung daily.

“Our country is going to carry on changing, and integration is also a task for the society taking up the task of dealing with immigrants,” Ms. Merkel told the daily newspaper. “For years we’ve been deceiving ourselves about this. Mosques, for example, are going to be a more prominent part of our cities than they were before.”

Germany, with a population of 4-5 million Muslims, has been divided in recent weeks by a debate over remarks by the Bundesbank’s Thilo Sarrazin, who argued Turkish and Arab immigrants were failing to integrate and were swamping Germany with a higher birth rate.

In France, 30% of children age 20 years and below are Muslims. The ratio in Paris and Marseille has soared to 45%. In southern France, there are more mosques than churches. The situation within the United Kingdom is not much better.

HAPPENSTANCE? Not by a long shot. In a nutshell, the left – from one end of the spectrum to the other, be it in the U.S., Europe or elsewhere – is on a uni-focused mission to destroy western civilization, that which is predicated upon Judeo-Christian underpinnings. Hence, they collude with Islam, since both target the same mortal enemy. Basically, the enemy of my enemy is my friend. And the fact that once Allah’s Muslim Terrorists take over they will go for their jugular too, well, that doesn’t factor in. Blinded. More importantly, western civilization must fall and that is that.

WHICH brings us to the media and its nefarious part. The nexus. Patience.

WHEREAS due diligence should require them to execute their digging and learn their lessons, nothing could be further from the truth. In other words, despite the fact that more and more Muslims are ‘fessing up – in one manner or another – by dispelling the lie re “moderate” Muslims,  the media remains deaf, dumb and blind. Even so, another has joined the truth-telling fray. He is Egyptian, a former military instructor and researcher. Enter, Hussein Aboubakr:

CLEAR as a bell. Similarly, Erdogan, Turkey’s leading Islamist, attests to the same:

RESULTANT, how could it be that the BBC (yes, a died-in-the-wool leftist mouthpiece organization, as well as reflexive apologists for Islam) produces a drama about Muslim gang rape, yet NEVER mentions Islam in the process??

The BBC has made a drama about girls affected by Muslim rape gangs – with no mention of Islam in press releases or the trailer, the writer claiming “there was no religious basis for this”.

Three Girls, which will be aired 16 May on BBC One, tells the story of three children from Rochdale targeted by a gang of Pakistani and Afghani origin Muslims between 2005 and 2008.

The case resulted in the 2012 conviction of the nine men for serious sexual offences, including rape and human trafficking, inflicted on girls as young as 13.

“The drama will look at the way in which these girls were groomed, how they were ignored by the authorities directly responsible for protecting them, and how they eventually made themselves heard,” the BBC explained in a statement.

Speaking to The Guardian, the series writer Nicole Taylor, insisted: “There was no religious basis for this, but a wider discussion about why this was, and is, a distinct pattern would be welcome.”

She said she “didn’t want to give these people [the English Defence League] an opportunity”, by telling the story, adding: “But that’s not a reason to do the drama.”

However, sentencing the men at the time, Judge Gerald Clifton bluntly disagreed, clearly stating that religion was a factor in the case and part of what motivated the men to treat the girls as they did.

He said the men treated the girls “as though they were worthless and beyond respect”.

“One of the factors leading to that was the fact that they were not part of your community or religion….continue reading….

MIND you, the media will NEVER, EVER tell the truth about sexual jihad (never mind the “refugee” crisis), but that doesn’t mean that the rest of us have to lie as well!

EVEN so, it gets worse. And this is where VP Pence comes in. OMG! And a Christian Pastor in the Bible belt too!

BUT before we get to that – and for the record – Pence appears to be well-meaning and definitely in sync with core conservative values. Props for that. As to the Pastor, well, multi-culti psychosis is his religion. It is exacerbated with a dangerous dose of leftism in the mix, and accounts for his madness. Indeed, yours truly has proven this to be true, again and again. The likes of Rev. Jim Melnyk, pastor of St. Paul’s Episcopal Church in Smithfield will be the death of America.

AS to the VP, he is wildly off the mark vis-à-vis  Islam’s leaders and their disinformation campaigns throughout the west. Yes, taqiyya, tawriya, kitman and muruna.

THUS, despite the following, he “righteously intoned:

The first Christian in decades to become governor of Jakarta,  Indonesia’s capital city, was sentenced to two years in prison for alleged blasphemy against Islam. The harsh sentence is perceived as a critical blow to religious ‘tolerance’ in the world’s largest Muslim majority country.

SO, in light of the above, it is even more important for CAIR, the Muslim Brotherhood Mafia’s main propaganda arm in America –  which is dedicated to supplanting the Constitution and installing Sharia Law as the “law of the land” – to have its day in court. Finally, a major lawsuit will reveal (through the discovery process, etc.) all of its radical ties and plans to bring down America, despite its legal team’s attempts to flood the opposition with motion after motion.

INHERENTLY, it is also the case that America’s leaders have more than contributed to the rise of Islam within the nation, and in countless “innocent” ways. But most intrinsically, the visa program (never mind the “refugee” resettlement program) for Muslims which includes fiancé visas, other family based visas, religious worker visas, entrepreneur visas, student visas, etc. – and with little to no vetting – must be viewed as a (national) “death by a thousand (visa) cuts.”

STILL yet, and most significantly, when all is said and done, one constant remains true: it is within this “climate of fear,” whereby Islamists are attacking hither and yon (and enabled by the left), that so-called “moderate” followers of Islam hide in plain sight. Effectively, in comparison with, and juxtaposition to, blood-soaked Mohammedans, of course, said Muslims appear “moderate.” In a pig’s eye. Sleigh of hand.

BUT as many Americans (westerners) have been forced to recognize and internalize, a majority of adherents to Islam may differ in their methodologies, but their ultimate goal is the same: the imposition of Shariah Law in America and the west in toto! And, this is beyond dispute, disquieting as it is.

According to the just-released survey (Jan. 2016) of Muslims, a majority (51%) agreed that “Muslims in America should have the choice of being governed according to shariah.” When that question was put to the broader U.S. population, the overwhelming majority held that shariah should not displace the U.S. Constitution (86% to 2%).

These notions were powerfully rejected by the broader population according to the Center’s earlier national survey. It found by a margin of 92%-2% that Muslims should be subject to the same courts as other citizens, rather than have their own courts and tribunals here in the U.S.

Even more troubling, is the fact that nearly a quarter of the Muslims polled believed that, “It is legitimate to use violence to punish those who give offense to Islam by, for example, portraying the prophet Mohammed.”

By contrast, the broader survey found that a 63% majority of those sampled said that “the freedom to engage in expression that offends Muslims or anybody else is guaranteed by the U.S. Constitution and cannot be restricted.”

SEEING….hearing….is believing – or it should be!