IT is not for nothing that the above Jewish dictums are cited within the “ABOUT” page of this site. Simply put, they are guiding forces.

BUT before today’s unmasking proceeds, it is mandatory due diligence to include what is often referred to as “full disclosure”, that is, when laying down an evidentiary charge-sheet. This time is no different. First things first.

FIRSTLY, otherwise intelligent individuals (albeit, sleepy-heads in the collusive med/pharma/gov’t arena) have been forced to become familiar with the bloody nexus between Big Pharma and government entities. Indeed, non-government enablers swarm around like sharks. As is said, it is hardly their first (deadly) rodeo.

TRAGICALLY, a direct knock-on effect of the global CHI-COM-Fauci virus — a smattering of which is linked herein — should be deemed the awakening; the defining moment into the netherworld of the aforementioned deadly tango.

ONTO the mandated due diligence.

WITHOUT going into too many heartbreaking details, as well as being allergic to reworking the wheel, in a manner of speaking, this is a subject borne out of tragedy — well before covid hit the masses. The point being, had a hyper-awareness of the subject matter at hand been present, that is, the lies often told by Big Pharma, well,

NOW that that is out in the open, let’s segue to a devil which has caused more deaths and untold suffering than this or that covid variant combined, of course, with the experimental mRNA vax in the mix.

ENTER: THE CRIMES OF THE SACKLER FAMILY VIA PURDUE PHARMA!! History of the family

AND whereas opioid addiction is nothing new under the sun, it wasn’t until the introduction of oxycontin a/k/a oxy (in 1996) via PURDUE PHARMA that the crisis exploded into epidemic proportions, in America and worldwide. Know this: it is the direct result of willful criminal actions — undertaken by the ‘Sackler Crime Family‘ through mendacious lies, highly aggressive marketing techniques, and aided and abetted by the FDA and related so-called oversight entities. Evil. 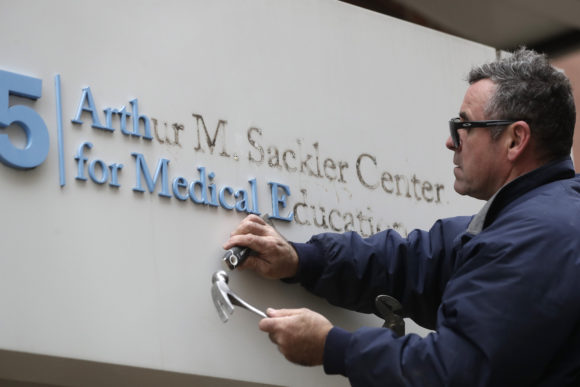 ASIDE from this and that article which lends a partial window into some of what went down, once caught, unfathomably, the top bosses tendered a non-apologetic, in-your-face response. It is outlined here. Don’t vomit.

NEXT up is a kinda, sorta admission re their criminal marketing, as evidenced below.

OxyContin maker Purdue Pharma has reached a supposedly $8 billion settlement with the federal government in which it pleads guilty in a criminal investigation over its role in the opioid epidemic, the US Department of Justice announced Wednesday.

As part of the settlement, Purdue will plead guilty to three counts related to its misleading marketing of opioid painkillers and faces a $3.5 billion criminal fine, $2 billion in criminal forfeitures, and a $2.8 billion civil settlement.

Purdue admits it illegally and misleadingly marketed its opioids, including “to more than 100 health care providers whom the company had good reason to believe were diverting opioids” for misuse; illegally paid doctors to prescribe more opioids; and took part in other fraudulent and illegal practices. Purdue says it did all of this between 2007 and at least 2017 — after a separate guilty plea in 2007 forced the company to pay more than $600 million in fines.

But no one — neither the company’s executives nor members of the Sackler family, which owns Purdue — will go to jail or prison as a result of the settlement.

Despite the settlement, it’s unclear how much Purdue will actually pay. The company is in the middle of bankruptcy proceedings, with claims from other people to whom it effectively owes money. The federal government is only one of many entities that Purdue’s holdings will likely be divvied up among.

The Justice Department also threw its support behind a deal that would turn Purdue into a public benefit company overseen by new leadership, with proceeds from OxyContin and other drugs purportedly going to help victims of the opioid crisis. Purdue previously proposed the deal to settle thousands of lawsuits against it, including from local and state governments, over its role in the opioid crisis.

ATOP it all, once oxy headed to the FDA for its “seal of approval”, the FDA backed up Purdue’s claims that it was non-addictive and safe, if used properly, even though they knew the bloody truth! In bed.

AS a matter of fact, it was a head honcho at the FDA, Curtis Wright, who slapped the “less addictive” label on this poisonous concoction. And, wouldn’t you know, once his FDA gig was over, he headed to work at Purdue for a more lucrative payday. Pay-for-play.

STILL yet, to really understand how far their criminal practices go back, look no further than to “Uncle Arthur”; Richard Sackler’s dishonest-bent uncle, from whom he learned the tricks of the trade, so to speak.

NOT unlike Mafioso crime families, as far back as the 1950’s, the immoral patriarch of Purdue developed the “art of trickery.” He bribed prestigious medical journals to print fake studies as to this and that drug safety. In turn, said studies were used to push (through very, very aggressive pharma reps) as much of the product as possible to more than willing doctors to “cure” whatever ailment it was being peddled for. Thus, Richard Sackler, the next in line to lead the dangerous, dishonest practices became an A+ student; in what can only be coined a jackal-like family, having mimicked the same playbook developed by his mentor!

BUT the real meat can be found by listening to a beyond jaw-dropping, eye-opening youtube/podcast:

MORE than worth the time.

BEYOND all of the deadly lies, rests another seedy underbelly.

THE WHITEWASH. THE LAUNDERING OF REPUTATIONS!

AGAIN, akin to Dons of Mafia-like crime families who always comport themselves Janus-faced — on the one hand, they engage in murderous activities in their “professional” lives, only to turn around and fund this and that “noble” venture, community-wise or outside their borders.— the ‘Sackler Crime Family’ is no different.

AS it happens, in a highly grotesque manner, their “pet” projects are medical endowments at various locations. Can you believe it?? Mind you, while they develop pharma which, knowingly, kills millions upon millions, they pour millions into ventures to “cleanse” their names, at times, their souls.

EVEN more so, as an American-Israeli (since 2008, living in Israel), it is not lost at this end how essential the funding of medical schools (and their appendages) is to the nation’s health and welfare. Not only that, having a significant other whose professional life revolves around cardio-thoracic surgery, there is a deep appreciation for highly skilled docs.

IN this regard, since 1976, one of Israel’s noted medical schools bears the (shameful) name:

The Sackler School of Medicine (in Tel Aviv)

FOR even before their killer drug spread like a disease, the fact is that PURDUE PHARMA was born in sin. Read: Uncle Arthur!

KNOW this: no family can commit said crimes and escape punishment. Their time will come.

IF necessary, scroll up and refer back to the stated Jewish dictums.