BEFORE Islamists and their leftist compadres go ape-sh-t over another evidentiary trail re jihadi terror financing, let’s be very clear: laundering is part and parcel of Islamic jihad and it takes various forms. Twists and turns.  Besides, no amount of jive-talk will cover up its stench and dangerous intent, at least at this end. Don’t even try it. Deal.

MORE specifically, be it through drugs, cold, hard cash, gold and other precious metals, counterfeit cigs, knock-off goods, or another commodity, rest assured, the funding of jihadi terror on behalf of bloody Allah is continuously operating all across America. Beyond.

YES, funding jihadi terror is ALL about satiating their nihilistic pagan moon-god, as they inevitably scream: “allahu akbar” or “this is for Allah!!” Currently, Londonistan tells the tale. Indubitably, it is reflective of all their global carnage. Not only that, no longer is Israel the lone epicenter. Ground zero. Still yet, it is their “laboratory” for jihadi terror!

IN this regard, do recall this site’s initial forays into the maze-like jungle of laundering for the benefit of Allah, that is, before getting to the latest proofs and “news.” And, par for the course, the leftist media “swore” an omertà. No matter. If anything, yours truly is a master at ” breaking the silence.”

Memo to the clueless and mendacious media and leadership: for years, this investigative journalist has followed the linkages between jihadi laundering, as it traverses through many seemingly “garden variety” transactions.

For the record, more than a decade ago, some explosive info wended this way and it was handed over to trusted investigative contacts. It involved a particular cigarette smuggling AND counterfeit (knock-off) goods operation, in relation to Hezbollah’s sleeper cells in the U.S. Mind you, this jihadi “fund raising” zig zags across the Shia and Sunni divide. Equally busy launderers. Sunnis run their operations mainly, but not exclusively, up and down the I-95 (U.S.) corridor. Shia, on the other end, mainly utilize I-35 and Highway 59. Go figure. It’s a geography thing, ala their concentration of jihadists.

Not to get too specific, chains of convenience stores (from one end of the interstate to the other) and gas stations are deeply in the mix.

Ask yourselves: who do the owners of these terror-supporting businesses, aka “mom and pop” entrepreneurs, bow to? And, re said smuggling, what is their ultimate goal?

Internalize, wherever Americans turn, in one way or another, they will find ISLAMISTS plotting jihad!

In essence, the next time you venture into a Muslim-owned convenience store, gas station or anywhere they sell “knock-off” goods, you may want to stop and think: how much of the price tag is going to fund jihad, never mind the ways in which they launder the money….continue the evidentiary trail….

AND so on and so forth….be it mid-point in Ohio, or any other state in between.

According to reports, the suspects conspired for more than 2 years to buy contraband cigarettes in St. Louis, a low tax market, while transporting and distributing them in Chicago, Illinois, and New Jersey, which are high tax markets.

The store owners are accused of using several convenience stores that they operated to create the appearance of legal cigarette purchases.

Illegal profits form the contraband cigarette sales were laundered through accounts associated with the stores.

Synethetic drugs, K-2, was sold every day from a handful of the convenience stores. Authorities said the store owners manufactured synthetic drugs themselves by importing chemicals from China.

“The collaboration with our federal and local law enforcement partners is the key to breaking criminal enterprises in this area,” said Special Agent in Charge James M. Gibbons of HSI Chicago.“Synthetic drugs that are sold as purportedly legal substitutes for cannabis and stimulants, such as cocaine and methamphetamine, are neither legal nor safe,” said James P. Shroba, Special Agent in Charge of the DEA St. Louis Division. “These substances were never intended for human consumption and only serve to satisfy the avarice of the seller.”

If convicted, the defendants face a maximum of five to 20 years in prison and the possibility of a $1 million dollar fine…..

ALL of which must lead the (patriotic) reader to square the circle, so to speak. In other words, the next time you witness the co-option of “any street USA” (read: western), know that it is the other side of jihad. Effectively, it is a “stealth” path – via a myriad of avenues – to force the west to submit. Or, is it inclusion and multi-culti kumbaya at its finest, as leftist apologists and their Islamic partners bray? Nonsense. Hogwash. Defy anyone to prove otherwise.

INDEED, step-by step….creep-by-creep….ala one stealth tactic after another, multicultural fantasists – aka leftist-fascists – and their Islamic overlords are softening up western society to accept Islamic conquest, albeit, couched as “acceptance” of “the other.” In fact, as just one of countless examples, the public school system in the U.S. no longer adheres to “separation of church and state”, that is, unless one is a follower of Islam! Why is this??

BE it through the commandeering of public streets to “pray” to their insatiable bloody Allah, or another not so subtle show of supremacy, Islam WILL take over, if not halted in its deadly tracks. By the by, think about it this way: how many times have Christians and Jews hijacked, yes, hijacked, public streets to pray en mass? Never and never. Forthwith, the urgent question is: why are Mohammedans doing this – over and over again? Oh dear, an Aussie Imam is spilling the beans –

Terrorism in the UK is growing week after week. Having extremists within our societies is not multiculturalism, it’s suicide.

(And the following linked video illustrates Muslims “praying”, as they take over the street in front of Trump Tower!) 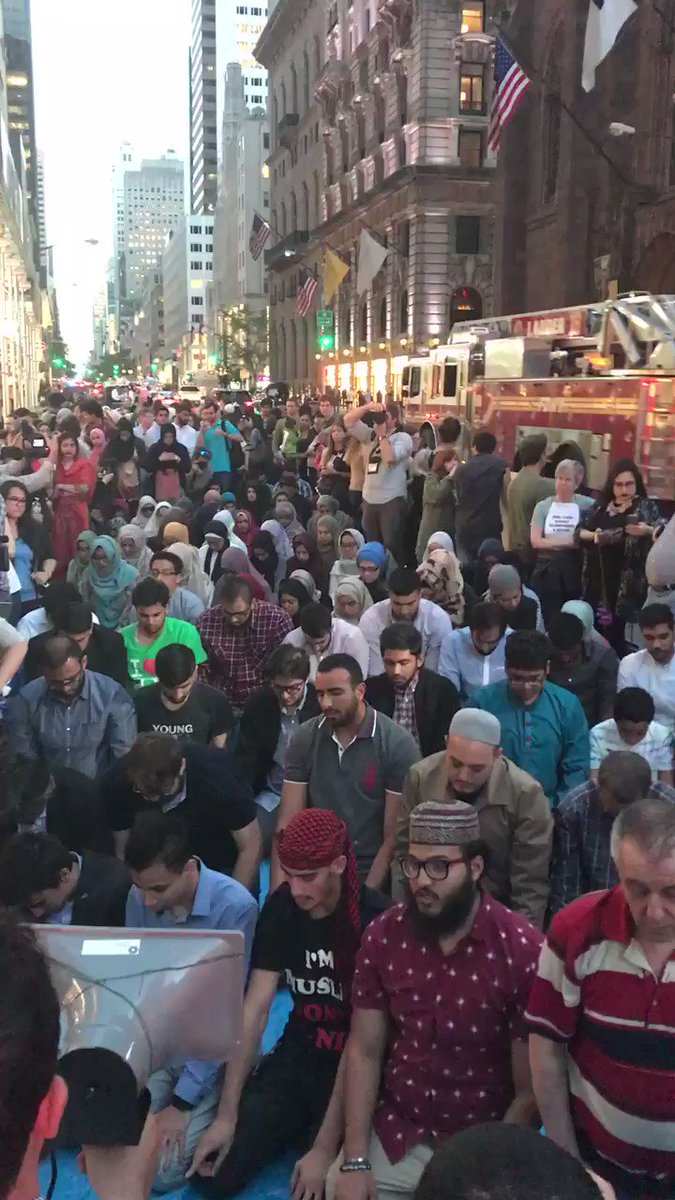 INCONTESTABLY, it makes no diff if said aggression is accomplished through “soft/stealth/civilizational” jihad – fully supported by jihadi money laundering – or through its end-point, frontal terror via cars/knives/bombs, methods which are currently their weapons and instruments of opportunity. After all, the end result is the same: terror sown through death and destruction!

BUT despite all the evidence, those who prefer to pooh-pooh this scenario must recall: few believed – a little more than a decade and a half ago – those who warned of Europe’s take over, although on a slow boil. Never mind that the signs were there from the 1970’s, when Eurabia became a done deal.

ADDING insult to grave injury, we were (still are) tsk, tsked. mocked, and called every unflattering name under the sun. Imagine that. Even some “see no evil” relatives (of yours truly) got in on the act. Never mind. Promise, you all, the “enlightened” ones, shall remain nameless! Pray tell, just admit: who was the one who knew what’s what? Now, that’s not so hard, is it?

MOST significantly, and above all else, defying the west’s captured, impotent, and globalist-driven leaders is key and core. And being that they are, for the most part, insulated from the carnage, they will NEVER, EVER admit that Islam IS the omnipresent danger to the entire west.

ISLAM, with its inextricable link to blood, is drowning the west and it will devour it – if not stopped!!

AND for heaven’s sake, if this counter-jihadist hears about one more blasted, insipid, as well as useless “vigil” to memorialize the innocent victims of Islamic terrorism, well, for shame on all the gutless citizens! For those who believe that such a reaction is appropriate and will “honor” the dead, the fact is that it is the coward’s way out. Look into your heart of hearts: how exactly will such behavior make a dent in the carnage, other than to demonstrate a sign of weakness on behalf of any given terrorized population, as they weep and wail, instead of “taking care of business??” Yes, leave the mourning to the families and friends of those cut down by Islam’s barbarians.

SO, once again, imbibe the following pearls of wisdom:

SO sayeth the wisest of men, King Solomon. And it is from the book of Proverbs that followers of the merciful G-d of Abraham, Isaac, and Jacob internalize the righteous and judicious path forward: to be moral, one has to know when to extend kindness, alongside offers of an olive branch. On the other hand, they understand when it is time to stand up to killers. Mohammedans, followers of the nihilistic creed of Islam, have proven themselves to be such barbarians from time immemorial.

PATRIOTS, do whatever you must to protect yourselves and your families!! G-d speed.