Secretary Clinton addresses the “Istanbul Process” for Combating Intolerance and Discrimination Based on Religion or Belief, Washington, DC

UNDER the guise of “tolerance”, the truly intolerant and dangerous, Islamists and leftists, are joining hands. They are actual force multipliers, but against liberty! It is under their Orwellian, taqiyya-laden umbrella (via CAIR, the Brotherhood’s American propaganda arm) that the made up out-of-whole-cloth term, Islamophobia, comes into sharp relief.

AND blow hards of whatever variation, who espouse otherwise, are damnable liars. Mind you, often leftists attach themselves to the fight against anti-semitism and work in the human rights arena, yet they become the most deceitful offenders (you know who you are, naming names is unnecessary, at least at this juncture). How so? They operate under what appears to be a righteous tent, but lend cover to Shariah law Islamists, those who are the worst of the worst.

SPECIFICALLY, the fact that the charade of “combating intolerance and discrimination based on religion and belief” (by feigning, yes, Muslims are the truly injured/aggrieved party…put aside their inner-tribal warfare…whose fault is that!) took place in Istanbul, Turkey, well, what a shock. Not.

IN reality, it was the perfect address, an absolute foil, for the clueless west. Obama Inc. understood as much, as many still believe that Turkey is a “moderate” Muslim nation. Never mind that their Hamas/Brotherhood footprints are leading to the recent kidnapping of 3 Israeli Jewish teens! Oh dear… 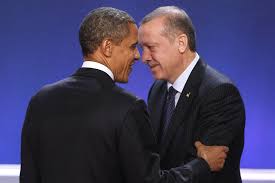 YES, Erdogan’s Brotherhood is knee-deep in protecting Al Qaeda’s ISIS, a Brotherhood linked operation! Not only that, but the Turkish/Obama link was a focal point of a widely read interview (Oct. 2013), one which minced no words. It pointed to Turkey’s Erdogan as a major Muslim Brotherhood player, as well as backtracked to Barack HUSSEIN Obama’s nexus thereof. Why? Turkey’s Erodogan is often painted as a “moderate” Muslim leader, thereby, cooperating, aligning, together is in America’s best interests.Yep, to bridge/heal the divide between the Muslim world and America it’s prudent to “talk Turkey”. Such a tack is nothing but a fairy tale, and this blogger knows as much. Therefore, duty bound to apprise others.

Adina Kutnicki: In answer to the all important question of Turkey, its position as a so called “moderate” Muslim nation and its relationship to Israel, a brief backgrounder is in order. Turkey has enjoyed a “pet” relationship within the west, ever since its membership in NATO began in 1952. And, while the honeymoon lasted a little over 50 years, not too long after Prime Minister Recep Erdogan took over the helm, in March 2003, as Turkey’s 25th PM, the government’s Islamist agenda (from a secular leaning/tolerant nation) reared its head. Their volte face was not done in rapid moves, but akin to the precepts of Stealth Jihad – incrementally, phase by phase.

REGARDLESS of the above truths and dangers, what do they have to do with this commentary’s thesis: yes, there is a direct linkage between Obama’s agents and Shariah law’s blasphemy implementation; “The Istanbul Process”; the “video made them do it” Benghazigate lie and Obamacare’s contractors? Read on.

EVER since the Islamist-in-Chief took office, his surrogates have been working assiduously to “legalize” the Shariah law of blasphemy. Eric Holder, as AG, is his “legal” point man. Others within his administration work in varied capacities to effectuate Islamic silencing, mostly via the U.N. And this is where, as is said, the rubber meets the road. Hill trotted over to Istanbul to begin the silencing “process” of American (western) masses! More precisely, this is where Benghazigate’s video “defense” entered the picture, however, its premature debut was unexpected. How so?

WELL, as reported at this site, the so called “video made them do it” was no more than a false flag operation, one which was commissioned by Obama Inc. to set the stage for these same blasphemy laws! What? Hang on, if you haven’t read it already….

The infamous “spontaneous” cause of combustion – the video, “Innocence of Muslims”, made them do it!

BUT as in all operations, expect the unexpected – the BLOWBACK. Benghazigate was not designed to kill Americans, but to empower the Muslim Brotherhood Mafia through weapons running and whatever else became necessary. The video’s initial intent was meant to spark worldwide Muslim rioting, but not as a “defensive” tool during the Libyan operation. Nevertheless, we all know, premature shit happens, and those who are adept in the art of propaganda, well, they are especially adaptable. Not a very rattled bunch. Nerves of steel. It is all very convoluted, bizarre and Orwellian, but no less true.

THAT being said, how do we jump from Istanbul all the way to Obamacare’s underwriters, so to speak? Easy peasy…and this ain’t a conspiracy theory!

READERS, do recall the specific reporting re John Brennan’s Islamic fingerprints and footprints, Obama’s CIA pick. More than relevant. In this regard, this is where his conversion comes into play, and the rest of his (Obama Inc.’s) anti-American activities flow from there.

SIGNIFICANTLY, he enters via attendant Mid East wildfires, specifically, through the “Innocence of Muslims” video whose producers are the SAME company, CGI Federal, which built Obamacare’s website! You got that? In fact, Brennan was the CEO of Stanley, Inc., the parent company of CGI. Hydra-like. Say what? Indeed, whatever it takes to bring down America.

In a SHOCKING discovery, CGI Federal – the Canadian Company that built the Obamacare website – appears to have a connection to the “Innocence of Muslims” video the Obama administration blamed for the Benghazi attacks.

And here’s how it was done:

The evidence is well established that in 2010, CGI acquired Stanley Associates, which “provides services to the U.S. federal civilian, defense and intelligence agencies”. [1]

When the crudely produced video “Innocence of Muslims” was posted to a YouTube it needed a boost, especially since it was posted by someone no one had ever heard of and who had only uploaded two videos – that were basically the same.

Well, a YouTube channel known as NewsPoliticsNow3 (NPN3) has been connected to Stanley Associates, the service provider for U.S. defense and “intelligence”…..

BUT there’s more. Another tidbit to remember was noted within these pages and related to CGI/Stanley Associates, aka the “shredder”:

Besides, the CIA’s underbelly has been demonstrably gutted, not by someone from the outside, but by a DEEP cover insider. Folks, when “the agency” veers off the American path, it is lethal to each and every U.S. citizen, regardless of their service to the country. This is a fact.

In the main, readers are free to believe that the orchestrated treacheries, from the hellish bowels of Obama Inc., are merely coinquidinks. That the interlocking trails leading straight back to the White House…to the FBI…CIA…the “contractor”…aka the “shredder” (CGI to Accenture)…are simply happenstance. Whatever floats your boat.

COMING full (Islamic) circle takes on ever more prescient meaning, since Obama Inc. heralded the “process” and sent Hillary (and others) as its emissary. These direct actions fully tie Obama Inc. to Turkey’s Erdogan and the entire Islamic push for Sharia law, and with the CIA’s (and others) deadly fingerprints working stealthily in the background.

WITH the above in mind, the following served as just one, of many, warning: the Islamic conquest of America is on target: its 20 year plan in perspective; a 10 year retrospective.

THUS, as a matter of factual record, by reviewing the goals of the “process”, let there be no doubt: Obama and gang, in tandem with their Islamic counterparts, are advocating for the evisceration of the First Amendment in America; the freedom to criticize (even if “it be” Islam/Shariah Law), as enshrined under the Constitution. But this should not be news to the readership because the guideposts have been paved at this site, forewarning of the dangers.

INDEED, this site’s specialty is unraveling the Muslim Brotherhood Mafia’s global footprints, be it from Islamists deeply embedded inside America or within the Mid East and beyond.

SO yes, Barack HUSSEIN Obama is an agent for the Muslim Brotherhood Mafia, as are his key people. This was as true for his first term, as for his second. However, the poisonous fruits of his treachery have come steadily to the fore during his second term.

ALAS, this is precisely why the Mid East is witnessing – for the first time since the collapse of the Ottoman Empire – the real possibility of the resurrection of the Caliphate, as exhorted, just this past week, by one of Obama’s key DHS Brothers, Mohamed Elibiary: