IF patriots really want to sound America’s (the west’s) alarm bells, post haste, ring from the rooftops core truths about Islam. Significantly, teach others what it really means to be a committed Muslim. Inherently, it tops said clarion calls. 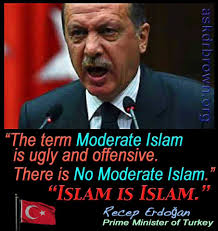 Mind you, this nation-saving task has nothing to do with “Muslims by birth”, those who are essentially non-practicing Muslims, apostates. Intrinsically, it has everything to do with individuals who consider themselves religious Muslims, irrespective of anything else they accomplish in their lives, be they doctors, lawyers or street thugs. They are all accomplices.

SO despite any other face they present to the “other” (via taqiyya, kitman, tawriya or muruna), whether a neighbor, colleague or even a so-called friend, the fact remains that Islam’s followers harbor dangerous hatred for all those who are non-Muslim. In fact, it is impossible to attend mosques in America (all over the west) without being inculcated in jihadi doctrine. That’s just the way it is. Their barracks within.

The Quran makes it clear that Islam is not about universal brotherhood, but about the brotherhood of believers:

The Believers are but a single Brotherhood (49:10)

Not all men are equal under Islam.  Slaves and the handicapped are not equal to healthy free men, for example (16:75-76).  The Quran introduces the “Law of Equality,” which establishes different levels of human value when considering certain matters, such as restitution for murder (2:178).

Neither are Muslim believers equal to non-Muslims:

A believing slave is superior to a free Mushrik (one who ascribes partners to Allah) (2:221)

The Quran plainly tells Muslims that they are a favored race, while those of other religions are “perverted transgressors”:

Ye are the best of peoples, evolved for mankind, enjoining what is right, forbidding what is wrong, and believing in Allah. If only the People of the Book[Christians and Jews] had faith, it were best for them: among them are some who have faith, but most of them are perverted transgressors. (3:110)

As we shall see later, Allah condemns non-Muslims to Hell based merely on their unbelief, while believers are rewarded with the finest earthly comforts in the hereafter, including never-ending food, wine and sex (56:12-40).

Much of the Quran is devoted to distinguishing Muslims from non-Muslims and impugning the latter.  Among other things, non-Muslims are said to be diseased (2:10), perverse (2:99), stupid (2:171) and deceitful (3:73).

The first sura of the Quran is a short prayer that is repeated by devout Muslims each day and ends with these words:

Muhammad was once asked if this pertained to Jews and Christians.  His response was, “Whom else?“ (Bukhari 56:662).

Since Allah makes such a strong distinction between Muslims and those outside the faith, it is only natural that Muslims should incorporate disparate standards of treatment into their daily lives.  The Quran tells Muslims to be compassionate with one another but ruthless to the infidel:

Muhammad is the messenger of Allah. And those with him are hard against the disbelievers and merciful among themselves… (48:29)

Islamic law actually forbids formal Muslim charity (in the form of the zakat payment) from being used to meet the needs of non-believers.

Allah intends for Muslims to triumph over unbelievers:

And never will Allah grant to the unbelievers a way to triumph over believers[Pickthall – “any way of success”] (4:141)

The only acceptable position of non-Muslims to Muslims is subjugation under Islamic rule:

Fight those who believe not in Allah nor the Last Day, nor hold that forbidden which hath been forbidden by Allah and His Messenger, nor acknowledge the religion of Truth, (even if they are) of the People of the Book, until they pay the Jizya with willing submission, and feel themselves subdued. (9:29 Jizya is the money that non-Muslims must pay to their Muslim overlords in a pure Islamic state.)

A common criticism of many Muslims is that they often behave arrogantly toward others.  Now you know why.

MOST significantly, “Pure Islam” brooks NO dissent, nor wiggle room. You are either ALL in or all out. Thus, anyone – wherever they live – who calls themselves a devoted Muslim, well, they cannot be innocent – good human beings – of the crimes committed in the name of Islam.

LEST anyone starts screaming that it is unfair to collectively punish individual Muslims for the barbarism committed in the name of Islam, well, frankly, they have no clue as to the political/religious doctrine of Islam.

UNLIKE in Christianity and Judaism – the twin pillars of western civilization – when fanatics commit this and that horror they can NEVER claim that the Bible sanctioned their slaughter-fest!

THUS, if so-called innocent Muslims want to disassociate themselves from the crimes committed under the banner of “Pure Islam”, there is no time like the present. Besides, patriots are beginning to stir, well, and it will be that much harder to extricate from this and that righteous outrage. There is only so much the truly innocent will (or should) tolerate. Remember that.

NOT only that, but the more HUSSEIN Obama exposes his true Islamist (green) colors, the less good Americans trust officialdom to “take care of business” and protect their loved ones.

The entire world is denouncing the US government for hypocrisy after the Obama administration condemned the Egyptian bombing of militants in Derna, Libya. The US launched a war in Libya in 2011 which turned Africa’s biggest economy into a violent failed state. The US is also currently bombing Somalia, Yemen, Iraq, Syria, Afghanistan, and Pakistan. The US is also involved in the bombing of Mali by French forces.

THEREFORE, read the following analysis – by a leading counter terror professional, who happens to be a close contact – with ALL due deliberation and consideration.

The  Fallacy Of The Innocent Muslim

By Dave Gaubatz (Islam Exposed: Ask the Expert …ISIS, Islam And Obama: Understanding The Threat To The Free World)
There is no nice or politically correct way to write this article without offending Muslims, the media, liberals, Allah’s Muslim Terrorist, people who skim the article instead of reading it completely line by line, or our Sunni Muslim President Obama.To put it as polite as humanly possible there are no innocent Muslims.  Continue reading before you judge.
Many readers are saying to themselves that they know good Muslims they work with, have as neighbors, or have met at school.  If they are indeed good people then they are not Pure Muslims. Islam does not allow anyone to be a good person.  Meaning, if you follow Islam as the pseudo Prophet Mohammed intended, you must have in your heart everything he demanded and represented.  You must adhere to ALL aspects of Sharia law, good or bad.
If a Muslim decides he/she does not want war with non believers, or does not want to educate his/her children that a Muslim must endorse physical Jihad against oppressors, Christians, or Jews, then this person is doing a good deed, but has become an apostate of Islam as mandated by the Islamic ideology. These are some of the good people Obama and the media (including FOX) falsely describe as innocent Muslims.  Again they may be good people but they have turned their backs on the Islamic faith. The people who are practicing Islam and are the type of people Mohammed wanted and described as a good Muslim, they are the members of Allah’s Muslim terrorists such as, ISIS, Al Qaeda, Boko Haram, and other acronyms.  They are following Islam and Sharia exactly as Mohammed and the Quran demands.
Many people are led to believe the people who attend one of the 2300 mosques in America are for the most part innocent Muslims.  This is false.  I have been to hundreds of mosques.  The people in the mosque are being taught from the same material as ISIS.  Year after year they continue to attend the mosque that advocates violence and the hatred of non believers.  These people are not innocent Muslims. These are people who desire to live their lives as the violent child rapist Mohammed.  No easier way to put it.
Just as Obama attended Jeremiah Wright’s church for 20 years, that on a regular basis preached the hatred for America, Obama is no more innocent than Wright is.  The people who attend Wright’s church on a regular basis are not innocent Christians or Americans.  These people are supporters of hate.People need to compare Nazi’s to Pure Muslims.  If a German citizen or others who followed to the letter Hitler’s ideology, they are not innocent Nazi’s.  They are 100% Nazi.  No in between.  They are followers of a violent and dangerous ideology.  The same is for people who practice Islam or are supporters of the Islamic ideology.The son (Franklin) of Billy Graham tells it straight to the liberal conservatives of Fox news.  There is no such thing as radical Islam.  It is Islam pure and simple and should be referred to as Islamic terrorism and not radical terrorism.The ONLY way to defeat Islamic terrorism is to defeat and demonize the ideology of Islam itself.  Ponder…my friends.
BOTTOM LINE:WITH the utmost urgency, consider the following two-part construct: if, as “Allah’s (White House) Muslim Terrorist” opines, Islam is a “religion of peace”, answer this query forthwith: how could it be that many millions of Muslims slaughter under the banner of Islamic jihad to satiate Allah, yet, we, despised infidels, are expected to think that they are all “misunderstanding” Allah’s Koranic dictates?

THIS site (a platform with an access to millions) demands a speedy explanation from followers of Islam and their apologists!

TIME is of the essence.

NO pussyfooting around the “conundrum” will be tolerated.