BEFORE we dissect the heart of the west’s highly penetrable exposure to jihadi explosions, more aptly, its gaping jugular, it is beyond ironic that a fed up segment of Swedish citizens present some “prescriptive” measures. Oh really, has this investigative journalist lost her mind? Not at all. Yes, even among loosey-goosey Swedes, certain bridges are too far to cross. Finally.

MORE pointedly, the Swedish gov’t – akin to all socialist regimes – is incapable of protecting their citizens in the long-term. Not only that, Sweden’s Foreign Minister, Margot Wallström, is a bent-over backwards Arab/Muslim sandal-licker. Alas, this is not a good sign for Sweden’s non-Muslim citizens. Ya think?

CONTEMPTIBLY, she had the utter mendacity to BLAME Islam’s barbaric slaughter in Paris on…you guessed it….Israel! You know, the ever handy bugaboo. As always, it’s Israel’s “fault” that “peace” hasn’t broken out in the Mid East, ipso facto, Allah’s barbarians couldn’t help themselves!! What a bastard and a liar. Damn her (and all those who concur) to an eternal hell of living in their midst. A fitting punishment.

REGARDLESS of said Allah-washing, fed up Swedish activists have decided to take matters into their own hands. Indeed, they are fired up!

NOW, being that Sweden absorbed a disproportionally higher amount of Islam’s monstrous “refugees” – relative to their population – than other EU countries, it is crystal clear that the Islamic blow back is too much to bear, even for the (mostly) “anything goes” Swedes.

MIND you, don’t think for a second that a lone “arsonist” was fired up. Hogwash.

Refugee centers in Sweden are being burned to the ground in what appears to be a statement against the significant number of refugees the country has allowed in.
The multiple arsons have all been at facilities which house or are slated to house immigrants.One could say that someone in Sweden is mad as hell and bringing fire and brimstone to the facilities that are to be used for refugees. Seven arson fires have occurred, all of which seem to be connected with immigrant centers.
Sweden has taken in more refugees than any other European country in proportion to its population. With 100,000 “asylum seekers” already in the country this year and another 90,000 thought to be arriving before the end of the year, the citizens of Sweden may not be as welcoming as they once were. 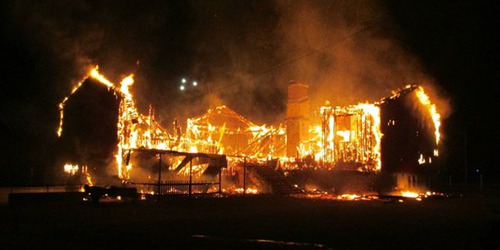 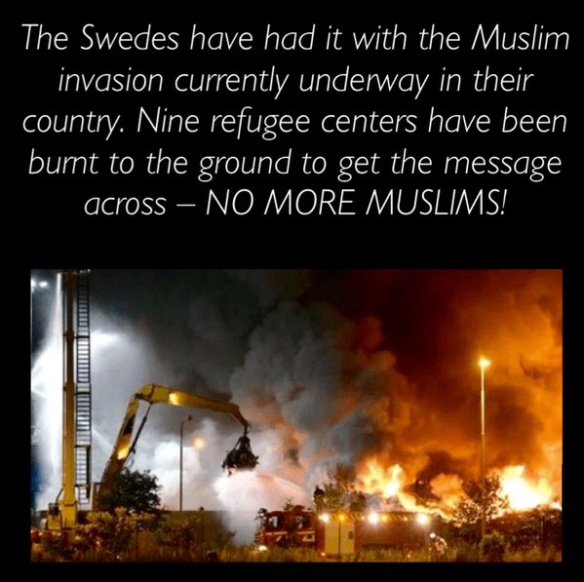 (Yes, a pic is worth a thousand words!!)

READERS, sorry, we are not done. Let’s head straight to the second tier of the force multiplier. Along this spectrum, how many are aware that a major French military base was broken into in July 2015? And what about a similar break-in, this past week, at a U.S. army reserve base in Massachusetts? Coinquidink? Do pigs fly?

France is to review security at all of its munitions depots after 40 grenades, 180 detonators and plastic explosives were stolen from a major base in southern France.

“Very well-informed” thieves broke into the Miramas arms depot northwest of Marseille, southern France, in the early hours of Monday after cutting through two wire fences, according to judicial sources.

The Marseille prosecutor has launched an inquiry into “theft via a break-in by an organised gang and fraudulent entry of a military base”.

The defence ministry has also launched an administrative inquiry into the worrying robbery of enough explosives to “blow up any bank or, worse, commit a large-scale attack at a time when the terrorist threat is high in France,” according to TF1, the French TV news channel.

Situated by the Berre lake, Miramas is a 250-hectare “logistics base” with rail access housing munitions used in external military operations, such as France’s campaign to neutralise Islamists in Mali.

Around 250 military staff are present in the day but only a few guards at night at Miramais, according to the local mayor Frédéric Vigouroux, who said there had been a “change of command” in the past ten days.

“Miramas has stocked munitions since the First World War. It houses many soldiers notably those as they prepare to leave for external military operations with the necessary munitions”.

“This is being taken very seriously but we don’t know the true extent of the theft yet, nor the causes – it could be anything, including the worst,” he told TF1.

Several of the depots can be seen behind barbed wire from the road, according to AFP. According to Europe 1 radio, the two lines of fence are not equipped with security cameras.

The defence ministry has ordered a review of “the protection of all military sites stocking munitions” within two weeks.

The review will “propose any required corrective measures”, the ministry said in a statement.

France has been on high terror alert since the January Islamist attacks in Paris that killed 17 and more recently a grisly attack by a lone Islamiston the outskirts of Lyon, southwestern France last month.

Yassin Salhi, 35, a delivery van driver, beheaded his boss, hoisted an Islamic State flag on a factory fence and tried to blow the site up. He sent two selfies of his crime to a French jihadist in Syria.

The attack came just hours before an Islamist gunman attacked a resort hotel in Tunisia killing 39 people, mostly British holiday-makers, and the same day that a suicide bomber blew himself up in a Shia Muslim mosque in Kuwait, killing him and 26 others.

France has been singled out as a jihadist target since conducting an anti-Islamist military operation in Mali and participating in air strikes against Isil positions in Iraq.

AND it is into this fiery mix that another breed of “activists” enter the fray. As always, using ones skill sets, if possible, should be the first line of offensive action. Yes, know that offensive action is preferable to playing catch up.

IN this regard, how life-saving would it be to shut down their communication networks, that which western leaders have no intention of doing? In other words, outside actors – bless them – are forced to do what must be done, thereby, causing explosive disruptions to their electronic communications. Yes, one barbarian after another would be relegated to giving Allah’s instructions via word of mouth or pigeon carrier status! Magica.

DEMONSTRABLY, it is through said communication networks that ISIS directly threatened Washington, the U.S. capital. On the other hand, unlike Obama Inc., they carry through with their threats. Still yet, in very real terms, it is beyond paradoxical that ISIS is targeting Washington at all, let alone as next in their sights (see video).

INHERENTLY, even though Washington and NYC were primary targets (as opposed to secondary, or addresses of opportunity…when studying patterns of global terrorism this is not a distinction without a diff) on 9/11/01, that was then and this is now. After all, “cowboy” Bush and “bad-ass” (ex Prosecutor) Mayor Rudy Giuliani were respectively in power.

ON the other hand, what sense does it make to mess with even one of the two cities that are now in the hands of Islam’s best friend(s)? How many times, how many ways, does it have to be proven: Obama Inc., is knee-deep in support of ISIS and its progenitor, the Muslim Brotherhood Mafia! Yes, it’s understood, hitting Washington is all about symbolism as America’s power base. But never mind. ISIS is in the cat-bird seat by just letting HUSSEIN Obama and crew stay put. And relative to commie Mayor deBlasio and his Islamist-loving policies, so too it should be the same calculus.
OH well…