THERE is no longer any doubt that HUSSEIN Obama’s helping hands are responsible for ISIS’s catapult. Trajectory. As opposed to his infamous and anti-capitalist words,“ If You’ve Got A Business, You Didn’t Build That,” indeed, Obama built ISIS! More accurately, he can be credited with being their creator. Atta boy…fist bumps all around.

OF course, said incendiary charge requires mandatory due diligence and back ups. Thus, as previously demonstrated:

IT is always gratifying to find out that straight shooting and high level security professionals have arrived at the same general conclusions as this Muslim Brotherhood expert and investigative journalist.

INTRINSICALLY, the aforementioned is in reference to the part played by Obama Inc. in “setting the stage” for the rise of ISIS, and its eventual declaration as the Islamic Caliphate. Well, said assessment may have appeared a tad “conspiratorial” in certain quarters, when first expounded at this site. No matter. No longer.

EFFECTIVELY, let’s hark back to particular dots which were previously connected, going as far back as 2013.

LET’S be clear: HUSSEIN Obama’s State Department, in tandem with the CIA, created ISIS. For the stated record, soon after Benghazigate blew up, this investigative journalist analyzed the following knock-on effects throughout several commentaries but summed up its basis in a recent report: continue reading….

SIMILARLY, it has been established at this site: ISIS/al-Qaeda was trained by Obama Inc.! BLOWBACK: U.S. Trained ISIS At Secret Jordan Base!

NOW that HUSSEIN Obama’s ISIS creds are firmly established, along comes a credible German reporter with this update:

A veteran German journalist who became the first to gain access as an embedded reporter with Islamic State (ISIS) revealed the jihadist terror group plans to bring nuclear annihilation across the globe.

The journalist, Jurgen Todenhofer, released his findings in a book called “Inside IS – Ten Days in the Islamic State,” reports the UK’s Daily Express on Friday.

Those warnings are made all the more stark by the possibility of a nuclear arms race in the Middle East sparked by the Iran nuclear deal, with rival states such as Saudi Arabia eyeing their own nuclear arsenal leading to a higher proliferation – and a higher chance that nuclear weapons could fall into ISIS hands.

Describing how he got the close-up expose with ISIS, Todenhofer detailed the intense negotiations with “the leadership of the Caliphate, via Skype, over several months, hammering out the security details.”

“Of course I’d seen the terrible, brutal beheading videos and it was of course after seeing this in the last few months that caused me the greatest concern in my negotiations to ensure how I can avoid this. Anyway, I made my will before I left.”

In speaking about the extent of ISIS’s power, he noted, “they now control land greater in size than the United Kingdom and are supported by an almost ecstatic enthusiasm the like of which I’ve never encountered before in a war zone. Every day hundreds of willing fighters from all over the world come.”

“They are the most brutal and most dangerous enemy I have ever seen in my life. I don’t see anyone who has a real chance to stop them. Only Arabs can stop IS. I came back very pessimistic.”

Those pessimistic warnings highlight criticism against the limited Western campaign against ISIS.

US President Barack Obama, after initially calling ISIS a “JV team” of Al Qaeda before they shot to power, admitted in June he has no strategy to fight the jihadist group.

MORE specifically, as noted: A revealing video from an Islamist cleric gives Muslim (ISIS related) “refugees” CHILLING orders, and this Is their REAL mission:

“We will breed children with them, because we shall conquer their countries — whether you like it or not, oh Germans, oh Americans, oh French, oh Italians, and all those like you. Take the refugees!” the Sheikh continued.

“We shall soon collect them in the name of the coming caliphate. We will say to you: These are our sons. Send them, or we will send our armies to you,” the cleric added threateningly.

THEREFORE, it was not for nothing that a concerted emphasis – almost obsessive-like – has been placed at this site on the relationship between HUSSEIN Obama and ISIS’s parent, the Brotherhood Mafia.

IT was for this reason, time and again, that this site asserted: HUSSEIN Obama is a jacked up Brotherhood Mafia “associate.”

LEST anyone is thinking that the aforementioned analysis – as to HUSSEIN Obama’s allegiances – isn’t corroborated by folks who operated deep in the bowels of certain agencies, think again.

NOT only that, it was also assessed (on enumerable occasions) at these pages: At the same time that he stacks his administration with the Brotherhood Mafia,

concomitantly, he refuses to label them a terror org! It was further demonstrated: While Egypt’s al-Sisi takes the opposite position – fighting them tooth and nail – HUSSEIN Obama empowers them. Again, the aforementioned “operative address” zeroes in on Egypt – relative to their dealings with the Brotherhood Mafia – as al-Sisi targets mosques and preachers who incite Islamism, juxtaposed against what is taking place within the recesses of Obama Inc. Clear as a bell.

EXTRAPOLATING further, due to the facts presented above – coupled with the leader of the (heretofore) free world dismissively declaring that ISIS is a “JV team” – well, who owns THAT “miscalculation” and the resultant fallout? Yes, his DHS took concrete steps to downplay said dangers, even as ISIS (and assorted Islamic tentacles, be they Sunni or Shia) has been more on target than off the mark.

MOST significantly, EVERYTHING ISIS said they would accomplish has come to fruition, and on a stepped-up basis too. Therefore, isn’t it reasonable to conclude that nuclear weapons are well within their grasp?

AND, as extra “food for thought”, the scuttlebutt coming this way (within the last few months) is that certain U.S. research labs (within academia’s nuclear engineering departments) can’t account for some nuclear grade components which have gone missing! Designs alike. You got that? Yes, this involves situations that haven’t reached the public domain, unlike other reported “incidents.“ Effectively, they have been kept under the radar. How come?

IN this regard, in discussions with these same highly qualified contacts, a repeated question kept arising: How is it possible that countless students/profs/techs from terror-driven countries roam within these labs, some of whom have “questionable” backgrounds? Indeed.

LET’S just leave it at that – for now. 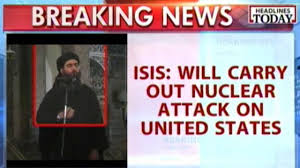