POSTERIORI, it must be stated for the record: Is there anyone with a semblance of knowledge in world history, let alone Biblical history, who hasn’t come across the following basic fact at hand: Jerusalem sprang from a Cannanite City to an Israelite City, and it is 3,000 years old! Besides, how many peoples can lay similar claim and title to their capitals? Zero. Zip. Zilch. Mind you, archaeologically-speaking, it couldn’t be clearer about Jerusalem’s centrality to the Jewish people. Incontestably,  the capital of the Jews’ ancient kingdom preceded Islam and the Arab and Muslim conquest by many centuries. Understood?

SIMILARLY, for the record: Yours truly is hardly known for suffering fools lightly – that’s an understatement! So much so, being called a “hard-ass” has been known to happen….occasionally….whatever. Ipso facto, there is little more enraging than having to “school” those who should know better. Still yet, for manifold reasons (chiefly, political, ideological, and, yes, outright hatred of the Jewish people) they refuse to accept historical reality. Infuriating. Maddening. 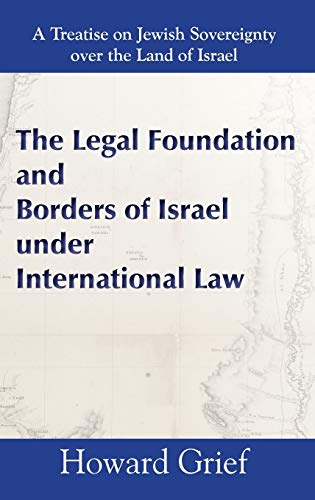 BE that as it may, in furtherance of the educational process, Howard Grief  (deceased since June 2013, may his memory be for a blessing), an esteemed legal scholar, left behind the most comprehensive legal treatise on this explosive issue. Published in 2008, its indisputable findings can be found within: The Legal Foundation and Borders of Israel under International Law. Having read it cover to cover, admittedly, it is not an easy read. Not only is it over 700 pages long, but it is chock full of legal treatments, as should be expected.

Howard Grief is the originator of the thesis that de jure sovereignty over the entire Land of Israel and Palestine was vested in the Jewish People as a result of the San Remo Resolution adopted at the San Remo Peace Conference on April 24, 1920….

IN this regard, ever since the re-establishment of the modern state of Israel 70 years ago – the homeland of the Jewish people from time immemorial – the world has been in an uproar over Israel laying claim to its eternal capital, Jerusalem. Credo quia absurdum! 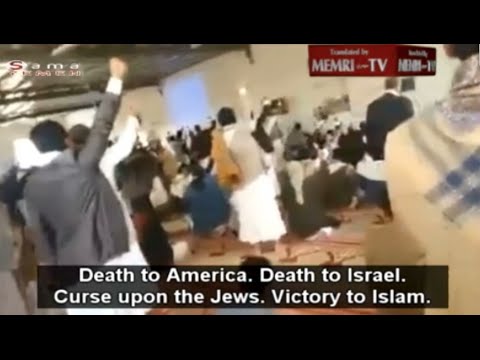 BUT while it is never surprising that Islam’s warriors and Europe’s globalists are irredeemably and unrelentingly opposed to the Jewish people asserting their legal, historical, and, dare it be suggested, Biblical title to Israel, it is its capital, Jerusalem, which they obsessively fixate on. In a nutshell, if they can wrest Jerusalem, then the Jewish peoples’ beating heart will wither. Expire.

MORE specifically, Allah’s Muslim terrorists (with surrogates in tow) are, as always, threatening to wage regional fires – as if THAT isn’t par for the course – because Trump made good on his campaign promise to move the U.S. Embassy from Tel Aviv to Jerusalem. Btw, Iran’s Hitlerite regime “warns of an intifada against Israel” – almost as if they (and Islamists world over) haven’t been killing Jews and intoning, “Death to Israel” (and “Death to America”) for decades on end!

AS expected, Erdogan, the Brotherhood Mafia’s Turkish front-man, had this to say, albeit, through his mouthpiece:

The Turkish government’s spokesman on Wednesday said that the United States’ decision to recognize Jerusalem as the capital of Israel will plunge the region and the world into “a fire with no end in sight”.

“Declaring Jerusalem a capital is disregarding history and the truths in the region, it is a big injustice/cruelty, shortsightedness, foolishness/madness, it is plunging the region and the world into a fire with no end in sight,” Deputy Prime Minister Bekir Bozdag said on Twitter….

PRAY tell, when is the region not on fire?? Not only that, with murderous threats coming in fast and furious, isn’t it obvious that Islam is hardly a “religion of peace“, as its apologists opine, and that Jihad is its central pillar – and not the exclusive purview of ISIS, Al Qaeda and the like? If not, why not?

REGARDLESS, the fact that the U.S. has refused to even abide by its own Congressional mandate – until now – well, there are no words.

The Jerusalem Embassy Act of 1995, says in part:

The full text of the legislation follows:

Be it enacted by the Senate and House of Representatives of the United States of America in Congress assembled,

This Act may be cited as the “Jerusalem Embassy Act of 1995.”

The Congress makes the following findings:

(1) Each sovereign nation, under international law and custom, may designate its own capital.

(2) Since 1950, the city of Jerusalem has been the capital of the State of Israel.

(3) The city of Jerusalem is the seat of Israel’s President, Parliament, and Supreme Court, and the site of numerous government ministries and social and cultural institutions.

(4) The city of Jerusalem is the spiritual center of Judaism, and is also considered a holy city by the members of other religious faiths.

(5 )From 1948-1967, Jerusalem was a divided city and Israeli citizens of all faiths as well as Jewish citizens of all states were denied access to holy sites in the area controlled by Jordan.

(6) In 1967, the city of Jerusalem was reunited during the conflict known as the Six Day War.

(7) Since 1967, Jerusalem has been a united city administered by Israel, and persons of all religious faiths have been guaranteed full access to holy sites within the city.

(8) This year marks the 28th consecutive year that Jerusalem has been administered as a unified city in which the rights of all faiths have been respected and protected.

(9) In 1990, the Congress unanimously adopted Senate Concurrent Resolution 106, which declares that the Congress “strongly believes that Jerusalem must remain an undivided city in which the rights of every ethnic and religious group are protected”.

(10) In 1992, the United States Senate and House of Representatives unanimously adopted Senate Concurrent Resolution 113 of the One Hundred Second Congress to commemorate the 25th anniversary of the reunification of Jerusalem, and reaffirming congressional sentiment that Jerusalem must remain an undivided city.

(11) The September 13, 1993, Declaration of Principles on Interim Self-Government Arrangements lays out a timetable for the resolution of “final status” issues, including Jerusalem.

(12) The Agreement on the Gaza Strip and the Jericho Area was signed May 4,1994, beginning the five-year transitional period laid out in the Declaration of Principles.

(15) The United States maintains its embassy in the functioning capital of every country exception the case of our democratic friend and strategic ally, the State of Israel.

(16) The United States conducts official meetings and other business in the city of Jerusalem in de facto recognition of its status as the capital of Israel.

(17) In 1996, the State of Israel will celebrate the 3,000th anniversary of the Jewish presence in Jerusalem since King David’s entry.

(a) Statement of the Policy of the United States.—

(1) Jerusalem should remain an undivided city in which the rights of every ethnic and religious group are protected;

(2) Jerusalem should be recognized as the capital of the State of Israel; and

(3 )the United States Embassy in Israel should be established in Jerusalem no later than May 31, 1999.

(b)Opening Determination.—Not more than 50 percent of the funds appropriated to the Department of State for fiscal year 1999 for “Acquisition and Maintenance of Buildings Abroad” may be obligated until the Secretary of State determines and reports to Congress that the United States Embassy in Jerusalem has officially opened.

(a) Fiscal Year 1996.–Of the funds authorized to be appropriated for “Acquisition and Maintenance of Buildings Abroad” for the Department of State in fiscal year 1996, not less than $25,000,000 should be made available until expended only for construction and other costs associated with the establishment of the United States Embassy in Israel in the capital of Jerusalem.

(b)Fiscal Year 1997.—Of the funds authorized to be appropriated for “Acquisition and Maintenance of Buildings Abroad” for the Department of State in fiscal year 1997, not less than $75,000,000 should be made available until expended only for construction and other costs associated with the establishment of the United States Embassy in Israel in the capital of Jerusalem.

Not later than 30 days after the date of enactment of this Act, the Secretary of State shall submit a report to the Speaker of the House of Representatives and the Committee on Foreign Relations of the Senate detailing the Department of State’s plan to implement this Act. Such report shall include—

(1) estimated dates of completion for each phase of the establishment of the United States Embassy, including site identification, land acquisition, architectural, engineering and construction surveys, site preparation, and construction; and

(2) an estimate of the funding necessary to implement this Act, including all costs associated with establishing the United States Embassy in Israel in the capital of Jerusalem.

At the time of the submission of the President’s fiscal year 1997 budget request, and every six months thereafter, the Secretary of State shall report to the Speaker of the House of Representatives and the Committee on Foreign Relations of the Senate on the progress made toward opening the United States Embassy in Jerusalem.

(a) Waiver Authority.—(1) Beginning on October 1, 1998, the President may suspend the limitation set forth in section 3(b) for a period of six months if he determines and reports to Congress in advance that such suspension is necessary to protect the national security interests of the United States.

(A) a statement of the interests affected by the limitation that the President seeks to suspend; and

(B ) a discussion of the manner in which the limitation affects the interests.

TO wit, fast forward to December 6, 2017, as President Trump (for manifold reasons) abided by Congress’s 1995 mandate, and kept his campaign promise alike. The full transcript of his speech can be found here. Mazal tov…כל הכבוד. Indeed, a historic day!

MOST significantly, just for a moment, ponder the following scenarios: If another people were to lay claim to Rome (aside from Islamists, exhorting, Rome is theirs too!) as their capital, would that be acceptable? But never mind. What about the birthplace of Islam’s madman, “Prophet” Muhammad? If Mecca and Medina, the heart of Sunni Islam in Saudi Arabia, were laid claim to by non-Muslims, let alone by Shia Muslims, would that be tolerated, even in a parallel universe?

{re-blogged at TheHomelandSecurityNetwork} click on “Archives” to read, dated Dec. 8, 2017