The racist, black supremacist, and Jew-hating nature of Black Lives Matter (BLM)—which not only embraces the Hamas-inspired BDS (Boycott, Divestment, and Sanctions) movement against Israel and promotes antisemitic tropes, falsely accusing Israel of genocide, but is also a “campaign” of CAIR and closely linked to Farrakhan and the New Black Panthers—has been grossly under-reported. Instead, it has been legitimized and normalized as a mainstream organization within the left-wing political and media apparatus and even within more conservative circles.

In this regard, consider the following as additional supportive evidence of the same, that is, that Black Lives Matter spawned from the “parent” of the original Black Panthers — the foremost domestic terror organization which exploded across America in the 1960’s and 1970’s, alongside the infamous and more notorious of the two, the Weathermen.

And it is not for nothing that the founder of the Weathermen, Bill Ayers, is a close friend of Barack Obama —all his denials notwithstanding. Of course, both domestic terror organizations assign “social justice” as their raison d’être. Hogwash.

The broadening of the Black Lives Matter movement and its increasing focus on community empowerment echoes the evolution of the Black Power movement of the 1960s, a former Panther leader says.

Echoes of the past?

For many, the broadening of the Black Lives Matter movement and its increasing focus on community empowerment echoes the evolution of the Black Power movement of the 1960s. The Black Panther Party was formed in 1966 with the goal of “policing the police.” They drove around Oakland, Calif., following squad cars and recording incidents of police violence.

A year later, the Panthers released their Ten Point Program, which called for employment and housing for black people along with an end to police brutality. They also began offering social services to black communities. The Panthers ran health care clinics, distributed clothing, and served free breakfast to inner city children.

Jamal Joseph, a young leader of the Black Panthers who is now a director, writer, and film professor at Columbia University in New York, says that such community programs were “vital to the Panthers’ work” because the Panthers recognized “that the community needed to be part of their own liberation.”

“Similarly to what happened in the civil rights movement and in the Black liberation movement, [Black Lives Matter organizers] are connected nationally and also building consciousness and connecting the dots between what’s happening with mass incarceration and poverty and the lack of education,” says Joseph. “In other words, the movement is saying that we recognize that people are being killed by the cops, but also that people are being killed by neglect. And we want to address that. We want to address poverty, poor health care, poor education, and issues that are critical.”

It should come as no surprise then that yesterday Ace Burns, a “peaceful” African-American protestor seeking “justice,” introduced himself as the leader of a group he branded “FTP” and threatened to burn down New York City’s diamond district, which is mostly comprised of Jewish-owned businesses. FTP, he claimed, could mean “Free the People, “For the People,” or “Fire to Property.” As reported by Paul Sacca at The Blaze, his threat was captured live in an interview with Fox News, and he was picked up by the NYPD last night and is under investigation.

UPDATE:  Fox News has since reported that Israel “Ace” Burns has now been charged with one count of making terroristic threats, aggravated harassment and false reporting. According to Fox, he is now at central booking and has not been released.

If Mayor de Blasio doesn’t meet with the protest organizer tonight, he hints at fiery repercussions, ‘Gasoline is awfully cheap’

A protest leader delivered an ominous threat to burn down New York City’s Diamond District on Friday night if the mayor and governor refuse to meet him and his organization. The vague threat was all said during a live TV segment.

During a Fox News interview, a man who identified himself as “Ace Burns 2020,” hinted that he would burn down the Diamond District. The man said he was organizing a march from the Barclays Center in Brooklyn to City Hall on Saturday night. If Gov. Andrew Cuomo (D) and Mayor Bill de Blasio refused to speak with protesters at City Hall, the man hinted there would be fiery repercussions.

“Today I’m leading a demonstration from Barclay Center at 6 p.m. to City Hall, and that’s the first stop. We’re hoping de Blasio and Cuomo come out and talk to us and give the youth some direction,” the man stated. “But if they don’t, the next stop is the Diamond District. And gasoline, thanks to Trump, is awfully cheap.”

“That person was, basically suggesting that they plan to go to the Diamond District, which is run by Orthodox Jews here in New York City,” Shawn said. “Certainly hope that is not the case and we do not endorse, or in fact we condemn that type of language her on the Fox News channel. Someone saying that certainly should be called out in terms of any type of potential threat of any sort that we just heard, live from someone who’s interviewed here on this channel.”

Shortly after 9 p.m. on Saturday, NYPD announced that they had taken the man into custody for questioning. “Earlier tonight, a man wearing this mask threatened, in a live @FoxNews interview, to burn Manhattan’s diamond district down,” the NYPD tweeted. “Within hours, we identified the man & took him in to be interviewed.”

Burns said that he has camped out in front of the Barclays Center since June 3. He added that he is “camped out here indefinitely,” as long as there are protests and “so long as there is black people dying in the streets.”

In a Twitter video, the man told Cuomo that he needs to speak to him. “I’m not requesting anything. You’re going to give us a seat at the table,” the man said. “My ancestors earned this right. I didn’t ask to come here.”

Still Camped in front of @barclayscenter with no supplies because @uber driver stole my stuff and @tmobile phone! No matter I’m staying until @NYGovCuomo comes to talk #FTP 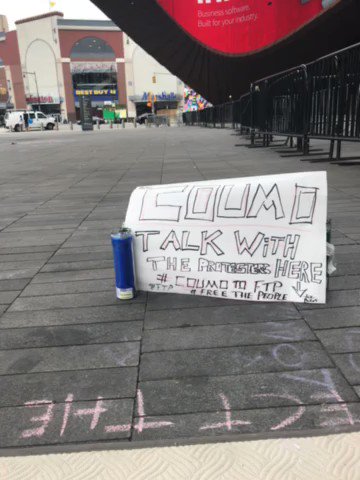