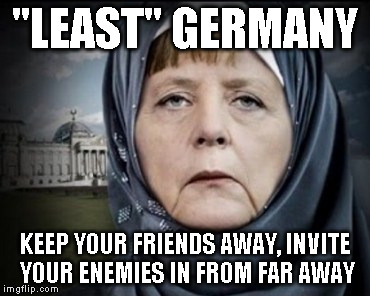 WHILE Der Spiegel has been busy “piecing” together intel re the infiltration of an ISIS leader into Germany, a particular contact of this site – who has sources in Syria -“hinted” at the very same penetration since the fall of 2015. In fact, without naming names, he made himself VERY clear: More than one ISIS leader entered Germany (and another western European nation) under the “refugee” program. Imagine that. Furthermore, he asserted that a few within Germany’s top-tier political echelon were aware of said situation and chose to stay mum. Oh well….wonder why….Alas, Der Spiegel was following its own leads and let the “jihadi cat out of the bag.”

EVEN so, the explosive nature of the intel was kept under wraps on this end, and only because that was the agreement to begin with. Apparently, his sources within Syria would not only dry up, but become endangered. The question left hanging in the air was: Why say anything in the first place?

IN any event, a decision was taken to ramp up reporting, thus, raising a spotlight on Angela Merkel’s inextricable push toward subsuming the nation (by extrapolation, the rest of Europe) into a third world haven for Islamic-infused barbarians, despite all her public (humanitarian) gobblyggok lies to the contrary.

MERKEL’S thrust to consume Germany with Islamic “refugees” is so intense that she recruited Facebook  – the biggest social media site on the planet – to “assist.” Therefore, negative posts re “refugees” are banned by Facebook’s nebulous  “community standards” – Islam good, western patriotism bad and so on – and censors, free speech be damned.

NOT only that, she threatened Eastern Euro leaders: Accept “refugees” – or prepare for war!

IN fact, the situation is so grave, German judges have already stated that entry given to hundreds of thousands of “refugees” – without proper authorization from gov’t entities – is illegal on its face. Imagine that.

AND thus it is hardly surprising that a TOP ISIS commander entered Germany, but its intel agencies were (supposedly) none the wiser.

The Muslim infiltrator, identified only by his first name “Bassam,” was pretending to be a refugee and had been accommodated at the German taxpayers’ expense in the picturesque municipality of Sankt Johann.

The Der Spiegel magazine (h/t New Observer)  had in the interim been informed by contacts in Syria that a senior IS commander had come to Germany posing as a “refugee.” That magazine sent journalists to follow-up on this lead, and, after obtaining his passport and his cell phone sim card, started piecing together the IS man’s path.

Bassam was, according to the information collected by Der Spiegel, an ISIS military commander in the district west of Deir al-Zor, a town in eastern Syria. He had originally been with the “moderate” rebels supplied, armed, and financed by the US government, but had, like almost all of them, defected first to the Al Nusra front and then to ISIS.

The cell phone sim card contained deleted photographs of IS actions in Syria which were recovered, along with pictures of the IS commander and friends in various poses. One of the many pictures recovered on the cell phone was of an IS execution in which victims were burned alive in metal cages.

Several witnesses in Syria who Der Spiegel spoke to said that Bassam had been a “notorious commander responsible for the deaths of dozens of people in Deir al-Zor and the surrounding area.”

In autumn, Bassam made it to Germany, pretending to be a refugee. Der Spiegel tracked him down and even interviewed him, before handing all their evidence over to the police, who then raided his residence.

The worst aspect of the situation is that the German security services were completely unaware of Bassam prior to the Der Spiegel investigations.

The raids were the second major police action against IS guerillas pretending to be refugees in Germany this week, after a swoop last Thursday saw several arrests in Berlin, Lower Saxony, and North Rhine-Westphalia.

AS if failure to vet who enters Germany’s borders isn’t beyond the pale and a TOTAL national betrayal, officials actually sponsor parties for them ala communal “welcome wagons!” If the aforementioned is not A GRAVE dereliction of duty via slitting the nation’s underbelly in the process, well, little else qualifies. But not to veer too off tangent, U.S. officials were forced to admit that vetting “refugees” is hardly a “done deal.”

FBI Director James Comey, flanked by the nation’s top intelligence officials, admitted to the House Homeland Security Committee Wednesday that for some of the 10,000 Syrian refugees the administration has agreed to allow into the U.S., there will be no basis to vet them through the databases it uses to determine if they have ties to terrorism.

“We can only query against that which we have collected, and so if someone has never made a ripple in the pond in Syria in a way that would get their identity or their interests reflected in our database, we can query our database til the cows come home, but … there’ll be nothing show up, because we have no record on that person,” said Comey.

IN any event, as is said,”boys will be boys” takes on the most ominous tone imaginable, at least when exposing Germany’s official “welcome wagons.” How so? Their Orwellian reactions to rape-jihad, which happened to occur right under their noses, is a prudent place to start! And if readers are still capable of being shocked, due to all the madness displayed by western leaders, suffice to state the following is prime evidence of said moral and national breakdown.

Oh, the irony. An association called “Refugees Welcome Bonn e.V.” organized a refugee welcome party. But then these do-gooders met the Islamic culture: the Muslim migrants sexually molested the women at the party.

And still the running dogs for Islam on the left continue to lay down for them (literally).  You can’t make this stuff up.

Here is what “Welcome Refugee” org posted on their site after the party (thanks to Mark):

Refugees Welcome Bonn e.V. wants to comment on the incidents that happened on party on the Township on Nov. 7th and was co-organized by our group. At the party we observed that some men molested, touched and harassed women. As co-organizer we want to apologize. During the party we tried to identify the offenders and make the leave the venue; also we made announcements where we asked to stop this behavior immediately. However, these measures were not successful. We apologize for that! Those men cast a negative light on our organization as well as on all men and male refugees, who were at our party.

[…] instead of just adversely pointing fingers at those who misbehave, we believe it’s as important for everyone in our civil society to tackle these differences in the daily integration.

For that reason we will increase our efforts to give no space to such behaviour during our upcoming parties and other events. We believe it’s essential to treat each other with respect and share the idea of a general equality between all human beings. That necessarily includes, akzepting [sic] a “No“, when making advances to somebody, instead of forcing your will on another person. We as a group campaign for this. Still it has to be said clearly, that this kind of behavior is not acceptable and not tolerated in our group.
WHEN all the above info is placed into civilized and rational context, one can then “understand” how Merkel’s Germany became a raging pit of Islamic jihadi hell fire. Alas, rape is now “explained” away as “misbehavior” that has to be “understood”, as indicated by the co-organizers of the “welcome wagon”: “We believe it’s as important for everyone in our civil society to tackle these differences in the daily integration.” W T F??
NO doubt, just as Euros can’t trust their damnable leaders, so too Americans would be crazy to trust theirs. Therefore, yesterday’s commentary takes on ever greater import and urgency: Turning The Tide: Florida Gun Supplier Initiates Jihadi HUNTING Season! Global Clashes Against “Refugee” Onslaught Continues. An Analysis.”
PATRIOTS, it’s all in your hands!