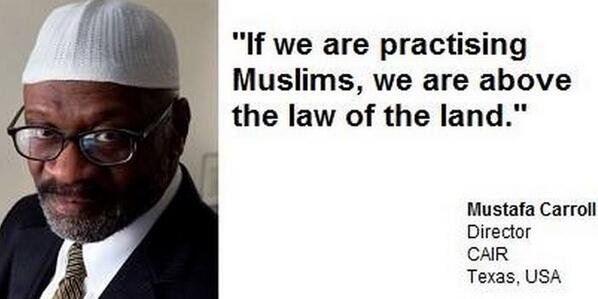 AS repeatedly harped on at this site, the ultimate goal of Islamists who are “hiding in plain sight” inside America is to (incrementally) submit the nation’s Constitutional basis into compliance with Shariah Law, and before patriots know what hits them. No doubt. And no one has to put these words in their mouth, after all, a preponderance are very open about their intentions! Still yet, enumerable refuse to believe them. Tone deaf.

IN this regard, this site’s patriotic duty warranted introducing millions of readers to “The Plan” and its Phases. And its essence is as important today – even more so – as it was when first highlighted in mid 2012. (un)Holy jihad.

AND being that its blueprint is spelled out in the above links, let’s move on to a related thrust and phase, that is, inserting Islam’s barbaric rituals into America’s holiday calendars! Step by step. Can you believe their unmitigated gall? Believe it.

IT must be understood that their latest infiltration is dual-pronged. Indeed, their main objective is to insert as many Islamic holidays into America’s public sphere and consciousness. A done deal. At the same time, desensitizing the non-Muslim public to the barbaric rituals of Halal slaughter is part and parcel thereof.

BUT before we discuss the Islamic holiday of Eid – Eid al-Adha is the latter of the two, the former being Eid al-Fitr – no one, and I mean no one, should dare opine at this site: well, what’s wrong with accommodating this and that Islamic holiday, one which marks the end of the month-long fast from Ramadan with a ritual Halal slaughter-fest? Besides, how is it any different than Kosher slaughter? Shmucks, a world apart.

ALAS, let’s cut to the chase: Kosher slaughter is held to the highest religious strictures and mandates through stringent guidelines, all in order to MINIMIZE the the animal’s pain and suffering!

RESULTANT, when one studies Judaic texts and teachings it becomes apparent that the ethical treatment of animals is a core concept. A fundamental connection is made early on within the Book of Genesis (chapters 1 -3), the first of the five books of the Torah.

IN this regard, Adam and Eve’s naming of the animals establishes that first bond. But it is within Genesis 9:3-4 that a balance is struck between permitting the use of animals for human need and the clear prohibition against unnecessary cruelty to animals. Mandated. But it is within the Talmud (Bava Metzia 32b) that this injunction against unnecessary cruelty acquires a definitive name–

the suffering of animals. Judaism provides a very clear path, relative to the relationship between man and animal.

Halal – requires the animal be bled out in agony while sick people who get off watching that kind of thing have a “festival.”

Kosher – requires the blood be drained cleanly from the *carcass* of the humanely killed animal, removing toxins released from cells into the bloodstream at the moment of death from the meat.

Halal –leaves the meat *filled* with toxins released at the moment of death because the blood is removed while the animal is dying and therefore is not present in sufficient quantities to remove those last toxins.

Kosher – contains little to no cortisol or norepenepherine (two stress chemicals that are similar enough from mammal to mammal to cross species) because the animal to be killed is treated well before it is put down and is generally not frightened as it is put down (because in a truly kosher slaughter situation, animals cannot be slaughtered in a sequential fashion, as the waste of one could contaminate the next, so they are not exposed to the “scent of death” the way non-kosher culls are)

Halal – animals watch other animals die during the blood letting festival, smelling their fear and raising their own stress. These stress chemicals “marinate” the meat in hormones known to raise levels of aggression and violence in nearly all mammal species (including human).

Halal – allows for a surprising range of cooking methods, including even some “tar tar” dishes (raw or nearly raw), allowing for the spread of disease and chemicals and hormones that were not removed by the idiotic slow bloodletting practice and half-measure cooking.

Kosher – the spinal cord is sectioned thus cutting off pain to the brain. Therefore, no suffering or terror.

EVEN so, leave it to Delaware – foot-in-the-mouth Joe Biden’s home state – to become shariah compliant by adding Eid to its holiday calendar!

TRAGICALLY, Halal animal torture is being practiced in many states, including Florida.

WITHOUT further ado, presenting, the barbaric Muslim holiday of Eid!

PATRIOTS, rest assured, Delaware is their first stop. Yes, the implantation of Eid will piggyback – explode – from there to the rest of the states, if not stopped in its tracks! Again, there is no time to lose in contacting state reps – as to what will await them – if they DARE to incorporate Shariah compliant holidays – or the like – into America’s public sphere.

AS anticipated, each time Islamic barbarism is revealed for what it is – be it toward humans or animals – the silence is deafening from those who claim to be liberals, the self-proclaimed protectors of human and animal rights. And not to be a nitpicker, but isn’t it overtly revealing that even the MEGA slaughter of Christians and Jews fails to ignite their outrage and cries for actionable justice? W T F is going on here??

AND what about the helpless animals, you know, G-d’s creatures too, and the many ways in which militant Islamic jihadists torture them alike? Where are all the bleeding heart liberals? Hide nor hare.

SO what does this all amount to, other than the much needed disinfectant to expose the left’s damnable hypocrisy and worse? Well, it should serve as clear and convincing notice to all patriots who care about the Constitution and want to preserve and protect its basis from a full-on infiltration and penetration of Shariah Law! Know that time is NOT on America’s side.

MOST significantly, and not to be lost in the discussion, Halal on steroids – Eid’s glorified slaughter-fest as its most high profile exhibit, akin to all aspects of Shariah compliance – is inextricably tied into funding terrorism, all the apologists and their howls notwithstanding.

THUS, let’s expose Zakat, the third pillar of Islam, via all its actual implications:

Islamic law requires a 2.5% tax called zakat which is imposed on income and accumulated wealth of all devout Muslims.
ie. the muslims that are involved in the halal industry – the imams, slaughtermen, workers, business & shop owners etc.

Halal certification is done on a fee for service basis, with the fees varying with the scope and scale of the services.
Certification is provided by Islamic organizations, and would not be halal if the required zakat was not paid on the fees.

What you may not know is that there are eight classes of zakat recipients, each of which gets a 1/8 share of the gross.
One of those classifications is fighters in Allah’s cause aka Mudihideen, aka terrorists.

When you purchase a product which is certified Halal, you are indirectly contributing to terrorism.

I quote from Reliance of the Traveller, the Shari’ah handbook of the majority Sunni sect of Islam.

h8.7: The Eight Categories of Recipients

It is obligatory to distribute one’s zakat among eight categories of recipients (O: meaning that zakat goes to none besides them), one-eighth of the zakat to each category. (n: In the Hanafi school, it is valid for the giver to distribute his zakat to all of the categories, some of them, or to confine himself to just one of them (al-Lubab fi sharh al-Kitab(y88), 1.155). )

h8.17: Those Fighting for Allah

The seventh category is those fighting for Allah, meaning people engaged in Islamic military operations for whom no salary has been allotted in the army roster, but who are volunteers for jihad without remuneration.
They are given enough to suffice them for the operation, even if affluent; of weapons, mounts, clothing, and expenses for the duration of the journey, round trip, and the time they spend there, even if prolonged.
Though nothing has been mentioned here of the expense involved in supporting such people’s families during this period, it seems clear that they should also be given it.

Over a billion people in the world follow the teaching of the Prophet Muhammad. His followers accept the validity of the prophethood of Muhammad and sincerely believe that his teachings are a divine message from Allah (God).

They believe that the message is embodied in the Holy Qur’an, and this Qur’an is the living word of Allah for ALL of humanity.

As-Sadaqât (here it means Zakât) are only for the Fuqarâ’ (poor), and Al-Masâkin (the poor) and those employed to collect (the funds); and for to attract the hearts of those who have been inclined (towards Islâm); and to free the captives; and for those in debt; and for Allâh’s Cause (i.e. for Mujâhidûn – those fighting in the holy wars), and for the wayfarer (a traveller who is cut off from everything); a duty imposed by Allâh. And Allâh is All-Knower, All-Wise. Al-Tawba 9:60

One of the five pillars of Islam is the requirement that every Muslims contribute to the Islamic charity (alms) tax or Zakat.

According to the Qur’an, the Zakat funds must be used for the following purposes.

EFFECTIVELY, one can’t have it both ways. On the one hand, one can’t point fingers at preening, holier than thou leftists who claim the mantle of “righteous” indignation – even though they are little more than silent accomplices to those whose barbarism know no bounds – yet, do nothing in the affirmative to reverse course. Yes, this is a harsh assessment, but no less true. Mind you, every time this and that is exposed at this site, it is understood that a risk is taken. A target placed. Patriots, all of us, wherever we reside, have a part to play. Inaction is no longer an option.

7 thoughts on “Shariah Compliance, Calendar-Like, Engulfs Delaware Via “Eid”: Its Tie-In To States Embracing Islamic Animal Torture. Where Are Leftist Bleeding Hearts? Where Are Patriots? Commentary By Adina Kutnicki”