ONE can analyze the whys and the wherefores re Europe’s capitulation to Islam until the cows come home, however, once a tipping point is crossed, well, any hope of reversing course is pretty much DOA. Kaput.

BE that as it may, a recent admission by French PM Manuel Valls is more than germane, in so far that it lends a very intrinsic insight into the mindset of Europe’s leadership. Most significantly, it is a mirror image reflection which underpins America’s helm, whether the emphasis is placed in the exact same place or not. Regardless, as is always the case with Europe’s leadership and their American counterparts – who are socialists, as well as obsessed multi-cultural self-appointed elites – they operate against the nation-state to institute a global umbrella. Non-surprisingly, albeit, revealingly, PM Manuel Valls haughtily intoned: 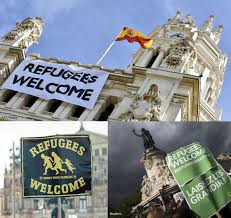 Secularism, it’s our DNA. It’s normal that we have a debate about it. The Republic was built on opposition to the power of the Catholic church. Today, secularism is confronted by the rise of radical Islam, but also the place of Islam in our societies. I believe in my country, in its message and its universal values. I would like us to be capable of demonstrating that Islam, a great world religion and the second religion of France, is fundamentally compatible with the Republic, democracy, our values, equality between men and women.

Some people don’t want to believe it, a majority of our fellow citizens doubt it, but me, I am convinced it is possible. It’s for that reason that we must protect – protect – our compatriots of Muslim faith or culture from stigmatisation, anti-Muslim acts. They also need to be protected from Salafist ideology. I have led the combat in the “quartiers populaires” [tn: working class districts, code for Muslim ghettoes] against antisemitism. Protecting our Muslim compatriots is fundamental too.

YOU got that? In other words – and with utter mendacity – he asserted that he is leading the fight against antisemitism from these same Islamic-infused quarters (like every Euro bastard before him, as he pats himself on the back), even though the following urgent questions attest otherwise: why is France such a HOTBED of anti-semitism, causing tens of thousands of Jews to flee for their lives from these same militant Islamic jihadists in the forefront?

The ISIS terrorists did not select the Bataclan theatre in Paris because it was a convenient target. It was selected because it has been a well-known Jewish establishment for decades. Until September, the theatre had been owned by Jews, two brothers named Marcel and Joel Laloux.

The Bataclan also hosted many Jewish conferences and events, including fundraisers for Friends of the IDF (the Israel Defense Forces). And indeed, over the years, the theatre has been the target—albeit unsuccessfully—of many threats and attempted terror attacks….continue reading…

MOREOVER, effectively, he conflated a correlation and an immoral equivalence between the terror suffered by Jews due to unbridled militant jihadism with “It’s for that reason that we must protect – protect – our compatriots of Muslim faith or culture from stigmatisation, anti-Muslim acts. Protecting our Muslim compatriots is fundamental too.” Scum – both the FM and his pet Islamists.

IN this regard, is anyone shocked that a media blackout is in place to cover up the fact that the capitals of Europe are on fire from Islam’s takeover? Don’t be.

These scenes are typical of what happens on New Years Eve and in the summer months, but with the flood of new migrants over-runing Europe, we can probably expect to see it year-round.

Here’s how one of the African migrants in France has fun – blocking an ambulance from getting through to an emergency. Why they don’t run the black bastard down, I’ll never know. Call me a racist, I don’t care.

BESIDES, no one with operating brain cells should have to ask: why is Europe self-immolating? That ship has sailed! But no matter. If an explanation is required, look no further than to Dr. Martin Sherman – one of this site’s close contacts – for a non-PC, full-on analysis at The Self-Cannibalization of Europe.

EVEN so, Merkel’s Germany, the leader of Europe’s implosion, isn’t done yet. Thus, aside from all the damage accrued by upwards of a million plus Islamic barbarians (aka “refugees”), Germany’s Justice Minister (how ironic, coming from someone who is supposed to oversee the nation’s justice system, similarly, demonstrating a clear pattern of malfeasance between HUSSEIN Obama’s tainted AG office and its various Islamist and Marxist tentacles) had this to add:

If you recall, there was a government-ordered media blackout on the hundreds of sexual attacks and rapes on young women by Muslims running wild in the streets of Cologne and other parts of Germany on New Year’s Eve.

Back then, Justice Minister Heiko Maas said: ”Making this an issue by over-simplifications, and connecting it to the refugee issue… Is nothing but a misuse of the discussion.” If that wasn’t bad enough, now he is proposing a ban on all sexy billboards because he says they are responsible for inciting Muslims to rape.

AS to the thesis: no explanations required re Europe’s self-immolation!

SO aside from the wealth of evidence amassed at this site evidencing how close America is on Europe’s heels to self-destruction, the horror is unending. In the familial-social realm as well! Yes, Europe is more than pushing for incest and pedophilia …..and a cadre in America alike.  Kid you not – no pun intended.

THIS past week alone, twice, Allah’s Muslim Terrorists upped the ante, in their continuous thrust inside America via stealth jihad with their non-stop demands to shove Shariah Law down the nation’s throat. Mind you, female Islamists are every bit as demanding and invasive as their male counterparts. With this in mind, who but Muslim supremacists would DARE to demand that a revered military institution change its almost 200 year storied code to accommodate Shariah Law? Rhetorical.

The upcoming student, a Muslim woman, reportedly wants to be able to wear a hijab while in uniform, and cover any skin when a shorter uniform is required, like when wearing summer or physical fitness uniform. This would be the first time that a uniform exception has been put in place. A senior at the Citadel, Nick Pinelli, wrote an entire Facebook post exposing this farce for what it is. Why should a university, who’s core values include discipline and homogeneity, open the door to radical politically correctness?

The Citadel already accepts women and Muslims, and no reports of anyone seeking exemptions has come up. Pinelli even recounts the story of a cadet suffering cerebral palsy who, instead of seeking accomodation, held himself to the same standard as everyone else and eventually succeeded.

One has to wonder if the Obama administration is putting pressure on the Citadel. Will the government attempt to impose its radical PC notions based on the whims of one student, or will this fine conservative bastion of education preserve its core values of equal treatment for all?

WOW! Just imagine how low America’s institutions have sunk – even revered ones – that The Citadel is even considering such an OUTRAGEOUS demand, regardless of any and all pressure. Now, if they ultimately do so, know that it has nothing to do with this and that “accommodation” and “special” request, as the institution’s leadership and the media will opine and spin that it doesn’t really change anything. Accepting said explanation would be akin to whistling (further) past America’s graveyard. Do internalize the absolute gravity of said capitulation, if it takes place.

INTRINSICALLY, this thrust is precisely of piece with the Muslim Brotherhood Mafia’s Phased Plan, that which encompasses 5 points of infiltration and penetration

BTW, at the same time that the latest travesty at The Citadel is playing out, the Brotherhood just finished its latest infiltration and penetration at Harvard, this time at its Law School. You know, that same “venerable” institution which is considered the nation’s premier law school, as well as throughout the world. Yes, it has supped with the Islamic devil countless times, but this time they outdid themselves. This conference is the byproduct of millions of dollars of pay-offs – aka “donations” – from Islamic nations and its patrons. Academic whores. Bought and paid to execute Islamic bidding!

Harvard University Law School served as the venue for a Muslim Brotherhood-organized conference billed as a “human rights” forum on Egypt and the Middle East.

The April 13 event, titled “As Goes Egypt, So Goes the Middle East: Changes Begin with Me,” was organized by Egyptians Abroad for Democracy, the overseas branch of the Egyptian Muslim Brotherhood, which Egypt’s current government considers to be a violent Islamist movement intent on implementing Shariah law. Russia, Syria, United Arab Emirates, Bahrain, and Saudi Arabia have all banned the Brotherhood as a terrorist organization, although the Saudis have helped fund the organization for years.

Dr. Mark Christian, executive director of the Global Faith Institute and a former imam who left Egypt and his Muslim Brotherhood-connected family 11 years ago to live in America, told WND that Harvard long ago sold its soul to the Brotherhood.

He said Harvard is home to the nation’s largest chapter of the Muslim Student Association, which is an offshoot of the Muslim Brotherhood with the goal of indoctrinating and radicalizing U.S. college students with false information about Israel.

At the same time Israel is demonized, the Brotherhood’s Palestinian branch, Hamas, is presented as a group fighting for the rights of a persecuted people, Christian said.

While the CNN fact-checker declared that any statement naming the Muslim Brotherhood as a terrorist organization is “totally false,” Christian says he knows from personal experience that is not true.

“Harvard University is the home to the biggest MSA chapter in America, and their pledge of allegiance ends with, ‘I will die to establish Islam,’” he said.

Saudi Prince Alwaleed bin Talal donated $20 million to Harvard in 2005 to establish a massive Islamic Studies Center on campus that was branded with his name.

The Alwaleed Islamic Studies Program at Harvard University is dedicated to furthering the scholarly study of Islam and the Muslim world.

“Harvard is the home for the core machine of interfaith dialogue adopted by the Islamic Society of North America and its parent organization, the Muslim Brotherhood,” Christian said, adding that it also has a connection to President Obama.

“Prince Alwaleed is the one who helped Obama into Harvard and helped pay his tuition,” he said.

“So it’s just not a surprise when you see Harvard hosting the Muslim Brotherhood.”…continue reading….

MIND you, the very fact that they hosted a “human rights” conference for the largest global terror umbrella, bar none (where even Egypt and others have outlawed its presence), bespeaks of the Brotherhood Mafia’s MEGA success in taking over American institutions in their decades quest for global dominance!

EVEN more so, the academic cesspool within America – duly amplified at this site – lends itself as quarterback to the BDS movement against Israel’s existence, that which is dear to both U.S. and European Marxists and their Islamist com-padres. Again, another linkage.

INDEED, the aforementioned Phase 3 has been accomplished, and then some. Phase 4 is almost complete. Phase 5, final conflict and overthrow (jihad), is on tap. No doubt.

SO how close is America relative to Europe’s demise? You decide.

10 thoughts on “Europe’s Self-Immolation, A Foreshadowing For America: How Close Is The U.S. To Europe’s Fate? Commentary By Adina Kutnicki”