WHILE HUSSEIN Obama and his gang of accomplices opine about the “plight” of the so-called “refugees”, ushering them into America’s bosom to the detriment of national security, the silence re the continuous slaughter of Christians is beyond deafening. Eerily so.

ALONG with said anti-Christian perspective, is it surprising that the following new stats reflect said hatred?

As the administration pushes ahead with a “surge” of Syrian refugee processing aimed at reaching its target of 10,000 this fiscal year, the proportion of Christians among those admitted remains smaller than one percent of the total.

Since the Paris attack last November highlighted the risk of terrorist groups using refugee admission programs as a cover to gain entry into Western countries, the State Department has now admitted 1,075 Syrian refugees.

State Department Refugee Processing Center data for the fiscal year to date show that a total of 1,366 Syrian refugees have been admitted since October 1, 2015.

Of those 1,366 refugees, 1,330 (97.3 per cent) are Sunnis and nine (0.6 percent) are Christians – three Catholics, two Orthodox, one Greek Orthodox, and three refugees described simply as “Christian.”

With the fiscal year more than half over, the administration has thus far managed to reach less than 15 percent of the target of 10,000 Syrian refugees announced by President Obama last fall.

The State Department recently established a special “resettlement surge center” in Amman, Jordan, aimed at speeding up processing times dramatically. The department maintains that the fast-tracking will not compromise security screening.

At the time when the Syrian conflict began in early 2011 – after the Assad regime cracked down on initially peaceful protests – Christians made up an estimated 10 percent of the Syrian population, and Sunnis an estimated 74 percent.

Yet that proportion is nowhere near reflected in the total number of refugees admitted to the U.S. since the conflict began in March 2011.

IN tandem, not content with slaughtering Christians, militant Islamic jihadists “religiously” burn their houses of worship to the ground. Ashes. Again, deadly silence from HUSSEIN Obama. Has the western world gone mad? Not really, if past is prologue.

ON the one hand, it must be recognized that nothing of substance has been learned since the Holocaust. Basically, the pretense is that (pithy) monuments and speeches made by (some) western leaders – all the while blaming Jews for not giving in to those seeking to annihilate them, once again – demonstrates their commitment to tackling highly resurgent anti-semitism. Liars. Reprobates.

SO if one realizes that it took the slaughter of six million Jews for the leadership of the free world to even begin to intervene, what does that say about those who are designated as leaders of the west, regardless of this or that election? Moreover, what about yesteryear’s European leadership (actual collaborators to the Holocaust), have their replacements learned any lessons at all? Does deaf, dumb and blind pass for government policy, such that it is?

IN this regard, bear in mind that HUSSEIN Obama is “in sympathy” with militant Islamic jihad, resultant, the slaughter of tens of thousands of Christians – even millions, let alone his unbridled hatred toward Jews – is little more than gum under his shoes.

TO wit, is anyone shocked that the deviants occupying the People’s House are living large and partying hearty, all the while Christian blood is flowing non-stop (never mind the intra-Muslim warfare, as they jockey for hegemony) with their houses of worship decimated alike?

Black lives don’t matter when they are being slaughtered by Muslims. U.S. at Easter: Ignore the Muslim Slaughter of Over 10,000 Christians and Destruction of 13,000 Churches in Nigeria | raymondibrahim.com

Boko Haram, the Nigerian Islamic extremist group, has killed more people in the name of jihad than the Islamic State (ISIS), according to the findings of a new report. Since 2000, when twelve Northern Nigerian states began implementing or more fully enforcing Islamic law, or Sharia, “between 9,000 to 11,500 Christians” have been killed. This is “a conservative estimate.”

In addition, “1.3 million Christians have become internally displaced or forced to relocate elsewhere,” and “13,000 churches have been closed or destroyed altogether.” Countless “thousands of Christian businesses, houses and other property have been destroyed.”

The report alludes to a number of other factors that connect the growth of the Nigerian jihad to the growth of the global jihad. The rise of anti-Christian, Islamic supremacism “did not emerge in Northern Nigeria until the 1980s, when Nigerian scholars and students returned from Arabic countries influenced by Wahhabi and Salafist teaching. Each year, thousands of West African Muslims get free scholarships to pursue their studies in the Sunni Arab countries; this has had a major impact on Nigerian culture.”

This “major impact” is not limited to Nigeria. Saudi Arabia annually spends over $100 billion disseminating “Wahhabi and Salafist teaching”—or what growing numbers of Muslims refer to as “true Islam”—including  through European and American mosques. Behind the radicalization of ISIS, Boko Haram, and Lone Wolf jihadis stand America’s best Muslim friends and allies.

Another important finding from the report is that, “Not just radical Islam, Boko Haram being the most notable example, but also Muslim Hausa-Fulani herdsmen and the Northern Muslim political and religious elite are also major actors of targeted violence towards the Christian minority.”

Most recently, on March 2, Nigerian human rights lawyer Emmanuel Ogebe sent an email saying: “I arrived Nigeria a few days ago to investigate what appears to be the worst massacre by Muslim [Hausa-Fulani] herdsmen… Over 500 Christian villagers were slain in one night.”  Similarly, according to a West African source, “Once Boko Haram is defeated, the problem will not be solved. Christians living under Sharia law are facing discrimination and marginalization and have limited to no access to federal rights.”

The report finally finds that much of the anti-Christian violence derives from the historical “migration of Muslims into non-Muslim territories in northern Nigeria to promote the Islamic religious and missionary agenda in all parts of northern Nigeria.” In other words, what Christians in Nigeria are experiencing is a live snapshot of what millions of Christians and other non-Muslims have experienced since the seventh century, when Islam “migrated” to their borders: violence, persecution, enslavement, and the destruction of churches….continue reading….

STILL yet, it goes without saying that there is nothing that HUSSEIN Obama wouldn’t do, or task his goons to perform, when the above is fully internalized – and it is barely the tip of their crimes against humanity!

THUS, DOJ operatives – whether State or Federal – understand the drill under the leadership of Obama Inc.’s compromised AG; one who shares the exact same political outcome and agenda as her boss, as did her predecessor. Yes, Lynch and Holder, “partners-in-crime.”

AND so it was an easy leap to invent a “reason” to perform a full-on RAID of the home of a citizen journalist, whose sole “crime” was exposing the ILLEGAL and INHUMANE practices of the abortion industry, “courtesy” of Planned Parenthood!

Daleiden has been under attack by pro-abortion groups since his Center for Medical Progress videos were released last year, revealing Planned Parenthood affiliates trafficking in the sale of baby body parts to medical researchers under encouragement from Planned Parenthood’s senior medical director.

The seizure of Daleiden’s materials, including a laptop and several hard drives, happened under the direction of California state Attorney General Kamala Harris (D), who is currently running for Senate and has received campaign funds from Planned Parenthood.

The Center for Medical Progress called the seizure an “attack on citizen journalism”: 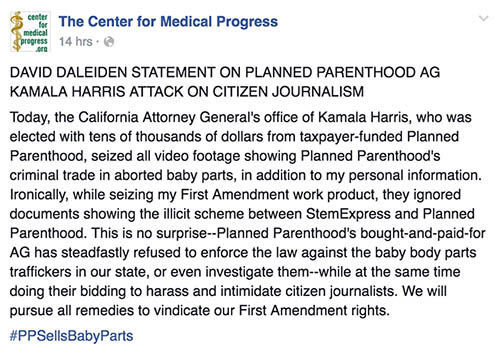 The raid happened hours after the Center for Medical Progress released its most recent video, which exposes the fraudulent consent form Planned Parenthood affiliates used to acquire the bodies of aborted babies.

The form, which was written and authorized by Planned Parenthood Federation of America and provided to its affiliates, tells pregnant women considering abortion that aborted fetal tissue “has been used to treat and find a cure for such diseases as diabetes, Parkinson’s disease, Alzheimer’s disease, cancer and AIDS.” No cures for these diseases are currently available, and no current therapies for them use aborted fetal tissue.

Consent is considered legally invalid if misrepresentation (like Planned Parenthood’s) is involved.

Ironically, a few hours before his apartment was raided, Delaiden released a prescient statement: “Law enforcement in Planned Parenthood-friendly jurisdictions should stop wasting taxpayer resources to assist Planned Parenthood in harassing citizen journalists, and should stop ignoring the evidence of real fraud, baby body parts trafficking, and criminal abortion practices right in their own backyard.”

DEAR readers, fellow patriots alike, is “Obama’s Amerika” more akin to a fascist nation, or not? If not, why not??

REST assured, history has a way of peeling back the filthy lies manufactured by this and that leadership, regardless of the passage of time. Their accomplices alike. Even so, it doesn’t bring back the tortured souls who were lost due to their willful immoral blindness or any other assistance given, be it overt, covert or through “mere” winks and nods.

IN summation, the silence accompanying the slaughtering of Christians (and countless Jews, due to Allah’s Muslim Terrorists) may well parallel “the unbearable burden of shame which lay upon the shoulders of the world community of silent bystanders after the Holocaust.”

(Islam’s committed followers are now chain-sawing their way to jihadi “infidel” slaughter, and below will explain the why’s and the wherefore’s)

{nominated for a Watcher’s of Weasels Award – non-council submissions}