IF you thought that the Islamist-in-Chief couldn’t top his anti-American swathe, well, you would be wrong. Indeed, there he blows again!

LIKE night follows day, a preponderance of his actions are F/B/O Islam, that is, when he isn’t busy upending America via race wars and Gay Mafia thrusts. Heart burn inducing.

STILL, when it comes to laying out the welcome mat for Islam, as is said, there is more than one way to skin a (American) cat. You betcha. So consider the following as just a sampling of ways in which he strengthens and uplifts Islam in America, and mostly through incremental steps towards Shariah Law becoming a fait accompli. The point being, most Americans haven’t a clue what comprises Islamic Law and its dictates, let alone that this is HUSSEIN Obama’s intent when he “accommodates” this and that to (ultimately) comply with its underpinnings and basis, Shariah Law!

BASICALLY, preparatory groundwork has to be laid to achieve one’s end goal, even if one is the POTUS. Sheesh.

FIRST and foremost, thus, those who are more outspoken about the true nature of Islam – its retrograde force and its incompatibility with western civilization – have to be silenced. There are a myriad of ways to handle “knuckledraggers” who refuse to cow and bow, yet, two stand apart: actual physical threats via “hit lists”, and a more “subtle” tactic ala “lawfare.“

EVEN so, there is one Shariah Law imperative which ratchets up the urgency to silence; the law of blasphemy. Hmm. It requires a full throttle and multi-pronged approach. Yes, it is this Islamic compulsion which drives Muslims utterly insane, and one (out of countless) such wilding was on full display with the assassinations at Charlie Hebdo! Its imposition demands that one never state an “impious” utterance or action concerning (pagan) Allah or (pedophile) Muhammad or anything considered sacred in Islam. Oh, really? Be that as it may, its strictures on non-Muslims are non-negotiable.

ENTER, HUSSEIN Obama and surrogates in a stealth-like manner with accommodations and tweaks:

ALAS, it is under the made up out of whole cloth weapon of “Islamophobia” that HUSSEIN Obama is working overtime. In this regard, his main hatchet man, Eric Holder (with recently appointed race-baiter AG Loretta Lynch fully on board), set the stage.

PATRIOTS, follow the trail from there to here: Americans silenced through Obama Inc.’s Shariah Law blasphemy dictates! Did you know this?

ALAS, true to treacherous form, the following bastardization to the heretofore Oath of Allegiance enters the fray:

The Obama administration recently made changes to the Oath of Allegiance to the United States in a manner very conducive to Sharia, or Islamic law.

On July 21, the U.S. Citizenship and Immigration Services (USCIS) announced some “modifications” to the Oath of Allegiance which immigrants must take before becoming naturalized.

Now the USCIS says that “A candidate [to U.S. citizenship] may be eligible to exclude these two clauses based on religious training and belief or a conscientious objection.”

The new changes further add that new candidates “May be eligible for [additional?] modifications based on religious training and belief, or conscientious objection arising from a deeply held moral or ethical code.”

These changes serve incoming Islamic supremacists especially well.  For, while Islamic law allows Muslims to feign loyalty to non-Muslim “infidel” authorities, it bans Muslims from living up to the pretense by actually fighting or killing fellow Muslims on behalf of a non-Muslim entity, such as the United States.

The perfectly fitting story of Nidal Hassan—the U.S. army major and “observant Muslim who prayed daily” but then turned murderer—comes to mind and is illustrative.

A pious Muslim, Hasan seemed a “regular American,” even if he was leading a double life—American Army major and psychiatrist by day, financial supporter of jihadi groups and associate of terrorists by night.  However, when time came for this American soldier to “bear arms on behalf of the United States”—to quote the original Oath of Allegiance—against fellow Muslims, things got ugly: he went on a shooting spree in Fort Hood, killing thirteen Americans, including one pregnant woman in 2009.

Much of Hasan’s behavior is grounded in the Islamic doctrine of Loyalty and Enmity.  According to this essential teaching, Muslims must always be loyal to Islam and fellow Muslims while having enmity for all non-Islamic things and persons.

However, whenever Muslims find themselves under the authority of non-Islamic institutions and persons, they are permitted to feign loyalty—even to the point of cursing Islam and pretending to have abandoned it—with one caveat: Muslims must never take up arms on behalf of “infidels” against fellow Muslims.  In other words, their loyalty to non-Muslims must be skin deep.

Most germane is Koran 3:28: “Let believers not take for friends and allies infidels rather than believers: and whoever does this shall have no relationship left with Allah—unless you but guard yourselves against them, taking precautions.”…read the whole thing!

IT goes without saying – at least it should – when formally stated oaths and allegiances are “modified” to accommodate a particular group that something is terribly amiss. Now, said re-jiggering was not done with any other group in mind, regardless of the spin from his mouthpieces at the USCIS or captured media. Rather, its essence was overhauled to fall in line with Islam’s core. Mind you, the oath was never tampered with, until HUSSEIN Obama came into office and implanted a complete network of Muslim Brotherhood operatives inside U.S. agencies. Fact-based. No exaggeration. And, others are not even included in this who’s who listing! 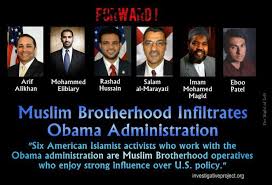 NOT only that, adding insult to grave American injury, Muslims are taught via Islamic cultural and religious dictates that America is the enemy, the devil.  Western civilization in toto.

Islamic jihad has declared war on the United States and all of Western civilization. ISIS has announced its intention to dominate the world and fly its black flag from the White House in continuation of a 1,400-year-old war against us “infidels.”

In the first 100 years after the death of Mohammed (a.d. 632)`, Islamic jihad conquered most of the known world except Western Europe. Christian forces blocked the first century of Islamic conquest at the very bloody Battle of Tours on October 10, 732. Islamic jihad continued to threaten the very existence of Christianity throughout the next millennium. October 7, 1571, marked the destruction of Islamic jihad’s massive fleet by the Holy League fleet in the Aegean Sea.

More than a century later, Islamic jihad, having conquered the Middle East and most of Eastern Europe, had surrounded and besieged the crown jewel of Western Christendom, Vienna. If Vienna fell to Islam, all of Western Europe would be likely to follow. After a two-month siege of Vienna, relief forces from Poland and Germany arrived.

The battle for relief of Vienna began on September 11, 1683, and ended with the rout of the Islamic forces the following day. On September 11, 1697, Prince Eugene caught and routed a large Islamic army and delivered a decisive blow at the Battle of Zenta.

In keeping with the September 11 theme, the British established a mandate for Palestine on September 11, 1922, and at the 1972 Olympic Games in Munich, eleven Israeli athletes were killed on September 11. Millions of Islamists remember the humiliations of September and seek to humiliate the “Great Satan,” the United States. Thus the attacks on the World Trade Towers and the Pentagon on September 11, 2001, and on the U.S. consulate in Benghazi on September 11, 2012.

Islamic jihad can be defeated, and it can be done in less time than it took to defeat the USSR in the Cold War. Our strategy, however, must be tailored to the times and circumstances.

Islamic jihad is our enemy. It has declared war on us and will kill us anywhere it can. No American is safe anywhere in the world until this suicidal ideology is defeated. It is not impossible to defeat an ideology. Within a span of half a century, Western civilization has defeated at least four ideologies. Nazism, Italian Fascism, and Japanese imperialism all went down literally in flames in the face of a superior culture. Next in line was the far more stubborn Russian Communism, which struggled through 45 years of cold war before succumbing to liberty and free enterprise. Islamic jihad can be defeated, and it can be done in less time than it took to defeat the USSR in the Cold War. Our strategy, however, must be tailored to the times and circumstances.

CYBER WARFARE: Islamists are not innovative but do have a history of borrowing technology and deploying it against their enemies. ISIS, for example, is using the Internet to inspire, recruit, and direct terrorists around the world. We have the capabilities to scramble their communications and cause them to doubt the sources of instructions. It’s time to launch cyber warfare against them both offensively and defensively and to do so worldwide. They will stop using the Internet only when they no longer trust the communications network. With a smart cyber-warfare system, we can watch them close down their most important recruiting tool.

FINANCIAL WARFARE: If all its resources could be shut off, ISIS would atrophy. The U.S. has a powerful global financial reach, giving us the capability of cutting off almost all funds flowing to ISIS. We need to shut off the flow of exported oil from the ISIS regions and shut off payments going to them. Banks that deal in transactions with Islamic jihad or with their suppliers can be singled out to be the target of special disincentives that raise the transaction costs well above the financial benefit of doing business with jihadists.

EDUCATION: The next and most difficult task is to shut down the elements of their educational system that teach Islamic jihad. Millions of young boys are indoctrinated daily with the ideology of Islamic jihad. The madrassas are a breeding ground for violent jihad and serve to identify and recruit the most zealous. Countering this indoctrination will require a worldwide effort and may well be endless, but it is necessary to make the attempt, because reduction in the teaching of intergenerational hatred is the foundation for a peaceful future.

MOREOVER, it must be understood that “modifying” the oath’s basis DIRECTLY allows Muslims, when living in Dar Al-Harb – the House of War – to have their cake and eat it too. Effectively, when living outside Islamic lands, the Koranic imperative of taqiyya (in tandem with kitman, tawriya, and muruna) demands that Muslims deceive non-Muslims by pretending to abide by the laws of the land, while cursing them in the process. Plotting. Biding time.

HOWEVER, a sticky point arises when an oath of allegiance for new immigrants binds them to come to America’s defense and to potentially kill a Muslim enemy. U.S. authorities (up until now) had the authority to hold Muslims accountable to said oath, come what may. To wit, changing this particular requirement is more than a nod. It is Shariah compliant, and without the messiness of this or that “beautiful trick.” Simple as that.

THEREFORE, is it any wonder that HUSSEIN Obama decided to do something about this non-compliant Shariah Law oath of allegiance? Of course not. Indeed, he revealed in “Audacity of Hope”: “I will stand with the Muslims should the political winds shift in an ugly direction.” The quote comes from page 261 of the paperback edition. Clear as a bell.

MOST significantly, ponder what would have happened to America, had Nazi SS officers been running the entire Washington apparatus during WW 2. Rest assured, bratwurst, as the national food, would have been the least of the changes. Goose stepping alike.

SIMILARLY, though on steroids, the Islamic “winds of change” in America conforms and aligns the nation, one step and one creep at a time into the Shariah States of America!