READERS who still believe that America is a sovereign nation, well, go back to dreamland. After all, a restful night’s sleep will become a rare commodity, when you awake to the (sooner than later) unfolding chaos. So, catch those zzzz’s while you can!

SUPPORTIVE of the above, how many have noticed countless non-stop implosions within America, since HUSSEIN Obama took over the helm? Are they just happenstances and Fed mismanagement, thereby, relegated to “business as usual” national issues?

ON the other side of America’s (realistic) continuum,  how many finally see a pattern of “planned chaos” as the epicenter? Actually, the wreckage appears to be the result of enumerable careening trains – let loose at the same time – via an orchestrated national collision course. And that isn’t conspiracy-talk!

CONSIDER: what exactly are the required ingredients, the pressure points, to destabilize America? Well, for starters, if the economy falls off the cliff; if illegal immigration catapults to the nth degree; if race relations are on a trip wire, and if Islamists are running amok within the White House and other power centers, isn’t that enough to deconstruct America?

IN tandem, how many signals re martial law have to blare, before they are recognized for what they are?

ADDITIONALLY, why are community police forces “armed to the teeth”, not unlike military forces, preparing to lay siege as if in battle formations? Hint: the reasons have zero to do with the “war on terror”!

MOREOVER, DHS, the umbrella where martial law is housed, is now America’s “standing army”, its forward-arm. Not only that, but do recall DHS’s MASSIVE, inexplicable stockpiling of ammo, unprecedented in U.S. shopping sprees, just a short while ago. For what? Now it’s coming full circle…the ubiquitous swirling Black Hawks too…

FINALLY, what about the purged generals and the training of red-like foreign troops on U. S. soil? But never mind.

NOT only that, but the above is the SHORT list, albeit, the most recognizable. Know this: if readers really internalize how “in bed” HUSSEIN Obama’s top Feds are with Islamist forces, there would be little reason to even mention anything else. It is THAT serious.

JADE HELM 15 Will Change America Forever
https://www.youtube.com/watch?v=TPKBjL3nB0o&feature=iv&src_vid=NXaYNtMIGUY&annotation_id=annotation_2159154971
ONCE viewed, if you can hang onto your guts, just walk past the balderdash that the exercises have to do with “evolving” threats.

Some of the social media commentary so far: “The Pentagon’s ‘Operations Jade Helm 15′: The Floodgate towards Martial Law and World War III?”

And another: “Using Foreign Troops with Jade Helm Martial Law is TREASON.”

Yet one more poster pointed to recent reported Wal-Mart closures in Texas, California, Florida and Oklahoma with concern, saying the cited “plumbing problems” cited as the reason for the sudden shut-downs just don’t meet the smell test.

“Employees impacted by the Wal-Mart closures were given just a few hours notice about the six-month shutdown,” the blog Inquisitr wrote. “Approximately 2,200 employees will now be without a paycheck during the ‘extended repairs.’ … The abrupt Wal-Mart closures announcement has reportedly left employees confused and Americans pondering the existence of Wal-Mart underground tunnels and Operation Jade Helm conspiracy theories.”

One of the theories?

Inquisitr reports: “One of the widely circulating rumors associated with the Jade Helm Wal-Mart story on the Internet speculates that the military will use the underground tunnels to move undetected around certain states with the stores being used as either a communications hub or FEMA camps.”

The fear is ratcheted by the fact city officials who govern the areas of the impacted Wal-Marts say the stores haven’t filed any permit requests for plumbing problems, Inquisitr said.

“We won’t trespass on somebody’s property without the agreement of that landowner,” he said, in a YouTube video of the presentation.

He also described the operation as a joint military-inter-agency activity involving members of all military branches, the FBI, the DEA and other law enforcement agencies. Meade said the FBI, for example, will do some questioning at one of the airports in Arizona.

One council member asked about the operation’s involvement of NATO and U.N. personnel.

SERIOUSLY, are they really expecting citizens to believe that WALMART’s closures are due to “plumbing” issues spanning across various sectors of America? How stupid do they think the citizens are? Apparently, very.

EVEN so, if folks still wish to look past the absolute Constitutional violation of Posse Comitatus – in tandem with too many others to count – again, go back to sleep. But know this: Obama Inc. is counting on said somnolence. On the other hand, if the birdie on your shoulder is telling you that something massively hinky is going down, well…

NOT only that, but JADE HELM 15 is more than operational in nature, per se. The exercises are part of a conditioning process, designed to gauge levels of resistance – or not.

YES, as warned repeatedly, the transformation of America – part and parcel of HUSSEIN Obama’s “hope and change” campaign – is coming to its “natural” tipping point. Alas, little did many realize what he meant, even though alternative media kept warning of the dangers.

IN reality, all of the so-called chaos became “necessary” to aid in said “process”. Absolutely, the piper has come due. So, whether its coinage is paid after the exercises are over, or delayed for a more precipitous date, the fact remains that the only bulwark against their plans are the millions of (armed) patriots ready to stand up and take back America.

YET, some positive news is forthcoming: 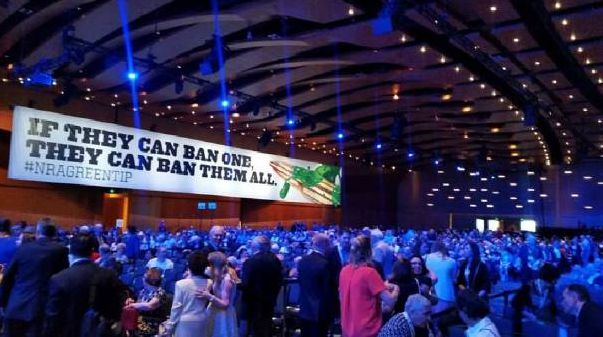 The reason: Americans now believe having a gun is the best way to protect against crime, 63 percent to 30 percent.

“We are at a moment when most Americans believe crime rates are rising and when most believe gun ownership – not gun control – makes people safer,” said the survey.

To say the shift in opinion is radical is not an understatement. It follows a short period where Americans were torn over gun ownership, but eventually sided with gun rights groups during the Obama years.

The findings also track with support for the National Rifle Association which had its second biggest national convention earlier this month and whose membership has reached five million.

Pew suggested that the change is the result of Americans believing that crime is a big problem, despite statistics showing the opposite….

BESIDES, more than a few Sheriffs are bucking the Feds, and this is one more piece of glad tidings: Sheriff to Legislators: I refuse to enforce your unconstitutional gun laws!
THINK about it two ways: as dangerous as “average” criminals are, in comparison to the thuggish regime of Obama Inc., citizens should be much more wary of government forces, the likes of which will make garden variety burglars the least of their concerns.
MOST tellingly, ever since HUSSEIN Obama catapulted into office, the Second Amendment right to bear (legal) arms has been an obsession with this administration.