“Typical” disease-ridden illegal, soon to be released into the American public!

EVERY now and again the Traitor/Bastard-in-Chief lets his mask down. Such is the case when dealing with his destructive wrecking ball swathing through the nation, be it through domestic or foreign fires.

ASSUREDLY, only those who are missing (more than) a few screws or malevolent in intent haven’t figured out that Barack HUSSEIN Obama is hell-bent on bringing the nation down. Henceforth, as mentioned previously, let us call him: the “f–k you” POTUS! This is not the time to mince words or be polite. That ship has long ago sailed. Besides, this is not the address for niceties or chit-chat. Readers are well aware, like it or not, if one desires stroking or feel good “news”, this site can’t accommodate. 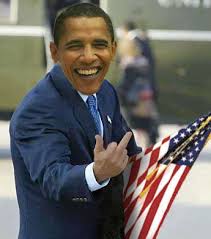 YOU get the picture….

BUT to understand what’s going on entails following where the end game lies. Basically, two plans are working in tandem. But for one to succeed the other has to take place. In plain language, an influx of limitless voters (illegals are made “legal”, consequently, attaching themselves to the Demster voting machine…the gimme gimme party) will secure their PERMANENT rule, regardless of anything that the Repubs do to push back. In concert, a highly weakened America, both economically and through diminished world standing, is ripe for inclusion in the New World Order. Yes, this is NO conspiracy theory. Fairy tale. “It be” real!

SO through Cloward-Piven deconstruction tactics – damn the Columbia U duo to eternal hell – both Demsters and RINOS are marching forward. Infamously, the elder Bush extolled similar goals on record. Traitors, all of them.

“…What is at stake is more than one small country. It is a big idea, a new world order where diverse nations are drawn together in common cause to achieve the universal aspirations of man kind; peace and security, freedom and the rule of law. Such is a world worthy of our struggle and worthy of our children’s future.” George Bush Sr…..

IN this regard, knowing what we do about the influx of infected illegals into America, and with Ebola in the forefront, what exactly does Barack HUSSEIN have in mind, as he ignored the CDC’s recommended rule book for blocking ill travelers?
Four years ago, quietly and without public notice, the Obama administration scrapped quarantine plans from the Centers for Disease Control (CDC) which could have blocked travelers with the deadly Ebola virus from entering the U.S.The Daily Caller reports that the rules, which would have given the federal government quarantine power over sick airline passengers, likely would have stopped Thomas Eric Duncan, a Liberian resident and the first case of Ebola reported in the U.S., from ever setting foot in the country and bringing Ebola with him.Duncan may have infected up to 100 people before being confined to an isolation ward in a Texas hospital.

The rules, first proposed by the CDC under the Bush administration in 2005, would have allowed the federal government to quarantine airline passengers showing symptoms for up to three days, as well as people exposed to those symptoms, and required airlines to inform the CDC about sick passengers and keep contact information on all passengers to enable the CDC to track down those possibly exposed.

Ebola was one of the diseases listed, along with highly contagious diseases such as smallpox, yellow fever, diphtheria, pandemic flu, tuberculosis and cholera. The rules were only to be used in the event someone suspected of carrying such diseases refused to cooperate with authorities.

Meanwhile, the State Department is refusing to ban travel from West Africa to the U.S., despite calls from Rep. Alan Grayson, D-Fla., who first requested a travel ban in July in a letter to Secretary of State John Kerry after the first Ebola cases broke out in West Africa, the Washington Times reports.

Grayson was informed by the Department of Homeland Security that they will “continue to work with its federal colleagues on any additional measures needed,” while a State Department spokesman said of a travel ban, “I don’t believe that’s something we’re considering.”

“The person who is now known to be infected with the disease had four days when he could have had contact with hundreds of people,” Grayson told U.S. News and World Report. “Can you tell me every person with whom he shook hands on Sept. 24?”

Special: Cancer and Your Age: What Was Found Will Shock You

“As much as we all may enjoy visits from people from other countries, at this point people from those countries are threatening our health and our well-being. We go to great lengths to prevent terrorists from visiting us and we should go to similar lengths to protect ourselves from people infected with the Ebola disease.

“Why are we playing dice with the lives of thousands of Americans?”

Even Botswana has imposed a travel ban on those from countries with an Ebola outbreak, with Health Minister John Seakgosing telling The Voice, “This is a nation’s health security and Ebola is very serious and deadly. We cannot afford to take that chance.”

In 2010, when the quarantine plan was dropped, American Civil Liberties Union attorney Christopher Calabrese told USA Today: “The fact that they’re backing away from this very coercive style of quarantine is good news.”

Duncan arrived in the U.S. on Sept. 20, traveling on a visa to visit family members. He became ill on Sept, 24 and went to a hospital, but was sent away with antibiotics, only to return and be confined to an isolation ward on Sept. 28.

Mark Krikorian, president of the Center for Immigration Studies, wrote in the National Review: “The idea that we allow people from those countries to board planes for the U.S. so long as they don’t have a fever is absurd.

“Much of our political class is simply uncomfortable with the idea that border and immigration controls should be used vigorously and unapologetically to protect Americans. You can hear the objections now: It would be xenophobic. It might stigmatize West Africans. Those countries will object to our State Department that they’re being discriminated against.

NOW bear in mind the aforementioned premise, the perpetual Demster voter base, and one needn’t wonder any longer where the Anti-American-in-Chief stands:

A fired up President Barack Obama had a message to immigration activists at a dinner this evening in Washington, D.C.: “no force on earth can stop us.”

“The clearest path to change is to change the voter turnout number,” said Obama “Si se puede, si votamos! Yes, we can, if we vote!”“

You know, earlier this year, I had a chance to host a screening of the film Cesar Chavez at the White House, and I was reminded that Cesar organized for nearly 20 years before his first major victory. He never saw that time as a failure. Looking back, he said, I remember the families who joined our movement and paid dues long before there was any hope of winning contracts. I remember thinking then that with spirit like that, no force on earth could stop us.

“That’s the promise of America then and that’s the promise of America now. People who love this country can change it. America isn’t Congress. America isn’t Washington. America is the striving immigrant who starts a business or the mom who works two low-wage jobs to give her kids a better life. America is the union leader and the CEO who put aside their differences to make the economy stronger. America is the student who defies the odds to become the first in the family to go to college. The citizen who defies the cynics and goes out there and votes. The young person who comes out of the shadows to demand the right to dream. That’s what America is about.

THE above rallying cry was not meant to placate, nor to fire up, the already anti-American crowd. It was a signal to them that the incendiary train has left the station in ways seen, as well as unseen. To wit, the implosion of America and its entire Constitutional edifice will happen, sooner than later. So if anyone ever doubted whether or not Barack HUSSEIN Obama should be tried for high crimes and misdemeanors, or for its twin cousin treason, doubt no longer.

THUS, by ignoring the LEGAL path to immigration and placing Americans at grave risk (through everything associated with said thrust), it goes without saying, the time has come to REMOVE the precipitous danger from office.

WHATEVER it takes. ALL options must be on the table. NO time to lose!