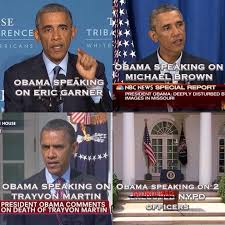 WHEN Senator Obama catapulted (seemingly) out of nowhere into the White House, he promised to “heal the racial divide”, over and over again. Yet, it was at a time when blacks were enjoying steadily increased upward mobility, some even more so than whites. Yes, there are enumerable poor whites too!

THE question dawned to some of us “knuckle-draggers”: What “wrongs needed to be righted”, when so many advancements for blacks – particularly, its growing middle class – were visible, other than those whipped up by professional race-baiters who are perpetually aggrieved, hyper-charged and highly paid hucksters? Always at the ready, they have many thousands of foot soldiers on tap. To what end? Wait. Read.

(Al Sharpton, since 2010, Obama’s “Race Ambassador”, at a rally in support of Michael Brown Jr. and police “brutality” at Greater Grace Church in Ferguson, Missouri. Never mind that his racial incitement led to murders, and he has been at it for decades. Even so, he enjoys a revolving door status at Obama’s White House, aka the People’s House!)

BUT never mind the facts at hand. In reality, the economic gains enjoyed by blacks have been wiped out under HUSSEIN Obama’s watch. Still, he claims to be their healer and savior from the so-called white “oppressor.”

Under his economic policy, black Americans have been crushed.

Millions of Americans endured financial calamities in the recession. But for many in the black community, job loss has knocked them out of the middle class and back into poverty. And some experts warn of a historic reversal of hard-won economic gains that took black people decades to achieve.

“History is going to say the black middle class was decimated” over the past few years, said Maya Wiley, director of the Center for Social Inclusion. “But we’re not done writing history.”

Adds Algernon Austin, director of the Economic Policy Institute’s Program on Race, Ethnicity and the Economy: “The recession is not over for black folks.”

WHAT’S really going on? And, don’t dare dismiss, birds of a (race-baiting) feather….

AS always, questions must lead to an end goal: What’s Obama Inc. up to? Intrinsically, what are they “hoping to change?”

ADDING to the above queries, one must always be mindful of hard stats, as much as his surrogates attempt to wish them away. 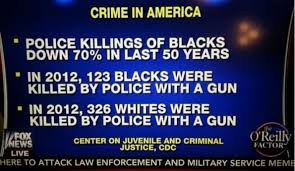 MOVING right along, ignore all their distractions and sideshows, and please concentrate on what is at stake. The fact remains that there IS a war going on inside America but not against blacks. Rather, it is against America as a Constitutional-based, freedom-seeking nation!

EFFECTIVELY, to keep tensions on high boil, “Black Lives Matter” was created by Demster operatives. Its underbelly comprises the hard left and their domestic terror counterparts, as referenced below. For decades, many of them have been in the forefront, working continuously to bring America to her knees. And whether or not they act as “advisers” – or what not – the ends always justify the means.

NOW, but only as a foretaste, the following excerpts are germane:

In a video posted to YouTube on Tuesday, a Black Lives Matter activist declares that it’s now “open season” for killing white people and police officers. Showing an image of black people standing on the U.S. flag, the host of the BlogTalkRadio program talks about “picking off” police officers.

“And,” the host says, “there’s nothing” that white people can do about it. “His day is up,” the unidentified host adds, speaking of white people.

“We will witness more executions and killing of white people and cops than we ever have before,” the host said. “It’s about to go down,” added the host, referring to the murder of Harris County Deputy Sheriff Darren Goforth and the Virginia shooting in which two employees of a television station were gunned down. The host of the program even found Goforth’s murder “funny.”

“It’s open season on killing white people and crackers,” the host added, echoing sentiments issued by leaders of the radical New Black Panther Party. The poster of the video, an individual who calls himself “Col. Hannibal Smith” of illwriteit.com, said that BlogTalkRadio “promotes terrorism” for allowing their services to be used by the group.

This is not the first time radical groups have issued calls for murder. As we have reported many times, leaders of the New Black Panther Party have called for white people to be murdered. One even advocated murdering white babies by bombing nurseries.

In 2013, we reported that an employee of the Department of Homeland Security advocated genocide on his personal website. “Warfare is eminent, and in order for Black people to survive the 21st century, we are going to have to kill a lot of whites – more than our christian (sic) hearts can possibly count,” Ayo Kimathi wrote.

Recently, Black Lives Matter protesters were recorded chanting, “pigs in a blanket, fry ’em like bacon,” a clear call for violence against police. The group claims they weren’t calling for violence, but the claim appears to have fallen on deaf ears….continue reading….

STILL yet, where is Obama Inc. headed? Moreover, why aren’t those who incite to murder in jail, pending lengthy criminal sentences? Rhetorical.

AS sickening (and illegal) as the above is, there’s more. Much more.

AT its base, the left, as a revolutionary movement, understands when to utilize soft vs hard power. The nexus thereof. Effectively, by incrementally setting the American house on fire through slow-boiling akin to frogs – be it through illegal aliens running rampant, Islamists on the loose, racial warfare, economic free-falls, and other pressure points ala cop-killings – average Americans become increasingly scared. Nevertheless, they are nowhere near hysterical, until a tipping point shifts the national landscape. To a certitude, Obama and surrogates are fully primed. Indeed, plans are in place to swoop in, when an opening to exert TOTAL control is decided upon. Deadly serious.

PRAIRIE FIRE, anyone? Yes, today’s fires are mirroring the 1974 communist revolutionary manifesto, and it was written by none other than VERY close associates of HUSSEIN Obama! As domestic terrorists, Weathermen, they were wanted by the FEDS.

Their partners-in-crime, the Black Panthers, you know, are the terror group that Eric Holder (and his successor alike) refused to indict for multiple chargeable offenses! Okey dokey.

(Al Sharpton whipped up the crowd with a mortifying, race-baiting speech, and with NBPP (New Black Panthers Party) members standing directly in front of the stage.)
RESULTANT, bringing down America has always been their mission, and they are closer than ever, “thanks” to their dedicated disciple and friend, HUSSEIN Obama!

INDUBITABLY, when city after city turn into war zones, most citizens will BEG for Federal intervention. Obama Inc., the arsonists, are counting on it.

BASICALLY, it will be the masses who will, however unwittingly, help usher in martial law. Consider this scenario as a visual aid: imagine – within all the chaos – folks running into the arms of Obama Inc.’s FED agencies to save their burning homes/communities, thinking they are the firefighters! As such, “calm” will need to be restored, hence, the imposition of this and that restrictive edict. Easy peasy.

CONSEQUENTIALLY, a little known “legal” caveat will be at the ready to gain ultimate control, and it is called THEMA; a “provisional” government. What this really entails is a complete acquisition of power to whoever is President when a crisis is declared nationally, and said person becomes akin to a King! You got that? Forthwith, Congressional reps and senators head back to their home states, and they become the legislative gov’t in their respective states, and that is that. Most significantly, the President is the only one who can call the crisis over! Oh. Oh dear.

KNOW this: HUSSEIN Obama, evil as he is, is NOT (emphasis placed) foolish. In fact, aside from the criminal duo Bonnie & Clyde Clinton, he is the most astute political operative to date.

TRUE to political form, on the one hand, through the well-known usage of a “trial balloon”, and on the other via a finger-in-the-eye, the Potentate-in-Waiting recently intoned: He could win a third term as President! Mind you, he does “admit” that the law does not allow it. Whatever.

BTW, America’s revolutionaries do not abide by any stumbling blocks, least of which include the rights of the American people, nor the “pesky” Constitution. However, for Obama Inc., the real challenge is the criminally bent Clintons.