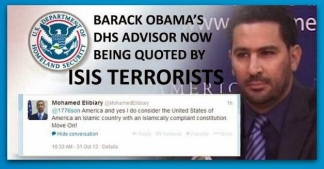 WHEN the fish stinks from the head up – as demonstrated through an Islamist head honcho at DHS, Mohamed Elibiary …yes, supposedly he “resigned” from DHS, but let’s not digress – there isn’t a snowball chance in hell that every manner of Islamic jihad hasn’t been granted open sesame. You see, within an Islamist’s mind’s eye, jihad is jihad is jihad, regardless which hydra or “lone wolf” carries it out. Mind you, beheading is okey dokey, as long as it is done for the establishment of the ummah.

SAY what? Absolutely, in order to terrorize the infidel into accepting their subjugation or death, said methods are prescribed. As such, this Shariah mandated tactic is not gonna make Obama Inc. turn squeamish, nor have second thoughts. Get this straight.

As always, one only has to understand the blood-soaked Koran – https://adinakutnicki.files.wordpress.com/2012/07/islam_and_blood.pdf – to see why Islamic-driven monsters can “justify” their horrifying practices.

Moreover, decapitations aka beheadings are also described in some of the earliest histories of Islam.

For the historical record, Muhammad’s earliest biographer, Ibn-Ishaq, describes how the prophet approved the beheadings of between 600 and 900 men from the Jewish Banu Qurayza tribe following the Battle of the Trench. History not only repeats, but followers of Islam are still implementing centuries-old “practices”, as if civilized society passed them by. It has.

Not only that, but it was a common form of execution under the Ottoman Empire, where it was the “primary form of symbolic aggression among Ottoman soldiers”, according to historian James J Reid. Graphically-speaking, let this tidbit sink in, in so far as Turkey’s President Erdogan (ex PM) is actively planning to resurrent the (reportedly benign…as if) Ottoman Empire. His main helpmates are the Muslim Brotherhood – with Hamas as its front-arm – and Barack HUSSEIN Obama. You read this “news” right here.

As mentioned, Saudi Arabia is neck-deep into the “art form” where a strict interpretation of Sharia law is enforced. Beheading is the form of punishment for a range of crimes, including drug running and apostasy, with approximately 80 people believed to have been beheaded by the kingdom last year. Oh boy, the bitter fruits of Wahhabism.

BUT before we get down to brass tacks, know this: Kerry, with the Jihadi-in-Chief’s blessing, pulled off his/their masks even further and left no room for equivocation or jive talk. Yes, he is a fugly piece of crap…hound dog and horse face-like, but don’t be fooled by his sad sack appearance. But let’s not get too picky…his boss looks like a cross between dumbo ears and a gangly metrosexual man-child. Phew. Yet he is as dangerous as a deadly serpent. Take a peek at what State is endorsing…

Endorsed by federal bureaucrats in America…after being rejected by law enforcement in Canada.

“United Against Terrorism” is the title of a new handbook reportedly written to combat the radicalization of young people who might be tempted to join ISIS and fight for the Islamic State…..

The Washington Free Beacon reports on the potentially inflammatory sections of the handbook that raised red flags for the Canadian authorities who ultimately decided not to distribute it:

The handbook itself recommends that “intelligence and law enforcement officials” should “avoid terms such as ‘Islamist terrorism’, ‘Islamicism’, and ‘Islamic extremism’ in favor of more accurate terms such as ‘al Qaeda inspired extremist,’” according to one section of the handbook, which still bears RCMP’s official logo.

“Do not refer to terrorists as ‘jihadis,’” the manual states. “This only emboldens them and gives them a legitimate status in the eyes of the vulnerable. Terrorism is not jihad. Jihad is a noble concept in Islam.”

Other sections in “United Against Terrorism”, according to the Free Beacon, tell the Muslim community that they are under no obligation to speak to the police about individuals who may be suspected of having extremist ties.

And yet, despite the rejection of the controversial work by Canadian law enforcement at the highest levels, John Kerry’s U.S. State Department has just issued what amounts to a positive review and thumbs up for the handbook.

That “positive article” cited in the U.S. State Department tweet to more than 12,000 followers doesn’t mention the controversy or the fact that the RCMP has rejected the “adversarial” publication.

This is not the first time that Kerry’s State Department has run into trouble as a result of its social media postings. As the Washington Free Beacon notes:

The department’s Counterterrorism Bureau (CT Bureau) was forced to issue multiple apologies earlier this year after it endorsed on Twitter a radical Muslim cleric who backed a fatwa calling for the murder of U.S. troops.

INDEED, again, whose side are they on? Asked and answered.

STILL yet, those who doubt, even for a nanosecond, whether or not this site is plugged in, well, do so at your own peril. And aside from shouting from the rooftops re the purposeful infiltration of the Brotherhood Mafia under Barack HUSSEIN Obama, dots have been connected from A-Z, as to what is coming down the pike. How much clearer does it need to be, other than through detailing the Muslim Brotherhood’s quest for global domination?

AND is harping on jihadi training camps inside America, plus exposing the “hands off” directives from Obama Inc. re Islamic jihad, getting any closer to the truth? What about the myriad of ISIS warnings within too?

SO as “news” swirls around that ISIS was apprehended in Texas, keep this tidbit uppermost in mind: know that they are already embedded within America, irrespective of this recent “capture”. Blaring alarm bells were issued at a Sept. 3, 2014 “tag team” interview with this investigative journalist, and we couldn’t have been any clearer. In lockstep.

BACK to Texas and the “news”….

ON the one hand, the absolutely reliable Judicial Watch, as well as Examiner and World Net Daily reported on the apprehension of ISIS on the border and inside Texas. A two-fer. No shock on this end.

JW confirmed this after California Congressman Duncan Hunter, a former Marine Corp Major and member of the House Armed Services Committee, disclosed on national television that at least ten Islamic State of Iraq and Greater Syria (ISIS) fighters have been caught crossing the Mexican border in Texas. The veteran lawmaker got the astounding intel straight from U.S. Customs and Border Protection (CBP), the Homeland Security agency responsible for guarding the 1,933-mile southern border.

“If you really want to protect Americans from ISIS, you secure the southern border,” Hunter proclaimed on a national cable news show this week. “It’s that simple. ISIS doesn’t have a navy, they don’t have an air force, they don’t have nuclear weapons. The only way that ISIS is going to harm Americans is by coming in through the southern border – which they already have.” The three-term congressmen went on: “They aren’t flying B-1 bombers, bombing American cities, but they are going to be bombing American cities coming across from Mexico.”

However, equally non shocking, DHS denied the claim, right after they confirmed it! Yup. Go figure.

“If they catch five or ten of them then you know there’s going to be dozens more that did not get caught by the border patrol,” he added. According to the California Republican, the information came from a confidential source in the Border Patrol.

Johnson, however, strongly disagreed, telling Wolf Blitzer that officials should “be responsible in what we decide to share with the American public, so that the public is informed.” Johnson’s statement came after a Homeland Security spokeswoman characterized Hunter’s statement as “categorically false,” CNN said….{investigative reporter’s note: yes, THAT Jeh Johnson}

WHOM do you believe is telling the truth, both based on past performance and the evidence gathered at this site, plus at various alternative media?

CATEGORICALLY, and for the record, ISIS etc were let into America through the foxes deep within the hen-house via the TOTALLY open borders. To argue that this is not the case is to agree with America’s, the west’s, destruction. This is not an arena which is still up for debate. To still require more proof is begging to wait for multiple attacks on the homeland. Moreover, when compared to 9/11/01, these guaranteed attacks will make what transpired, that hellish day 13 years ago, akin to a Disneyland adventure.

YES, the opening shot of jihad in America – as previously exposed in 2005 – absolutely didn’t commence with 9/11/01. It was the culmination of appeasement tactics and blinded eyes from the highest authorities, Demsters and RINOS alike. The only open question is: will this go around be more of the same, or will the leadership be held to ultimate account BEFORE the next crippling and devastating strikes?

CONCLUSIVELY, reportedly, ISIS is working to inaugurate its first University, including a nuclear research center in Mousl, Iraq…a VERY real WMD bomb making possibility with billions in oil revenue flowing into its coffers to grease appropriate hands around the world! O M G !

BTW, cogitate over this too: this site has received info that some radioactive materials are missing from several ! U.S. university research labs, and these labs work in cooperation with Fed projects. Now, if said “theft” can take place right under the noses of such smarties, what are the chances they will be caught? And does anyone believe that insiders aren’t in lockstep with said pilferers?

THIS is what happens when the leadership of the free world not only abdicates America’s hyper-power mantle, but is actively colluding with the Islamic enemy at hand. Could it get any more dire?

NOT from this clued-in perch…

30 thoughts on “ISIS INSIDE America, NOT Just At Texas Border As Reported!Readying To Pounce…Commentary By Adina Kutnicki”