AS is known, Rome wasn’t built in a day. The point being, a nation’s submission to Islam never happens overnight. Not at all. Besides, contrary to the PC, leftist, and captured media, haven’t you heard: Islam in Arabic is translated as “submission”; submission of desires to the will of God. It comes from the term “aslama”, which means “to surrender” or “resign oneself.” Incontestably.

IN fact, Islamists are dutifully aware that it is a very lengthy process to submit others to Allah. So much so, they hardly think of their main mission, as committed Muslims, in terms of instant gratification. Rather, their goals are long-term, thus, step-by-step they are phased in. Yes, “The Plan” attests to this very assertion, and no one should be foolish enough to argue otherwise. Time to get with the program. The truth.

FOR further disinfectant, listen up to the following (brief) video. Instructive. Its essence exposes the dangerous underbelly of the Brotherhood Mafia’s main players in America, and with knock-on effects to Canada through its same hydra-like front groups. Ditto. But in case you haven’t heard, CAIR is the Brotherhood Mafia’s propaganda arm!

ALAS, as to where they are in their “Phased Plan” for America and Canada (never forget, the above was conceived as a blueprint for North America), well, let’s just say that Islamists can walk and chew gum at the same time. In other words, as they stealthily implement each phase, so too (their non suit and tie) fellow Islamists are busy plotting frontal jihad as front-line soldiers for Allah, while others offer support via countless networks. Safe-houses. Self explanatory too.

SO it is under the above sword and banner that patriotic Canadians find themselves; entrapped.  Know that it was hardly unexpected. Mind you, even though loosey-goosey Canadian leftists paint themselves as liberal multi-culti types who embrace inclusion, the fact is that leftists are the ones, as always, who squash the underpinnings of the most liberal tenet of all: free speech! Welcome to Orwell’s universe. Dystopian.

IN this regard, before we segue to Islam’s triumph in Canada – and in order to grasp the enormity and gravity of the latest Canadian law – one must internalize its Shariah Law basis, that which totally underpins Islam! Indubitably, the laws of Blasphemy have been adopted by Canada (and elsewhere in the west, but let’s not digress). You got that?

Although, the Qur’an does not specify in unequivocal terms any punishment for blasphemy, we may find some serious justifications for death penalty to blasphemers:

Surely (as for) those who speak evil things of Allah and His Messenger, Allah has cursed them in this world and the here after, and He has prepared for them a chastisement bringing disgrace.
And those who speak evil things of the believing men and the believing women without their having earned (it), they are guilty indeed of a false accusation and a manifest sin.
O Prophet! say to your wives and your daughters and the women of the believers that they let down upon them their over-garments; this will be more proper, that they may be known, and thus they will not be given trouble; and Allah is Forgiving, Merciful.
If the hypocrites and those in whose hearts is a disease and the agitators in the city do not desist, We shall most certainly set you over them, then they shall not be your neighbors in it but for a little while;

Cursed: wherever they are found they shall be seized and murdered, a (horrible) murdering.

(Drawing Islamic cartoons falls under the rubric of the above jihadi tenets….off with the head – literally!)

ONTO the meat…presenting, Canada’s officially cloaked stealth jihadist, Iqra Khalid. She is one of countless.

The Canadian House of Commons has passed motion M103 which singles out the criticism of Islam as a form of “Islamophobia”. Critics condemn it as an attack on free speech.

Motion M103 was tabled by Iqra Khalid, a Muslim member of Prime Minister Justin Trudeau’s Liberal Party. It states the government must “condemn Islamophobia and all forms of systemic racism and religious discrimination”, was taken to vote on Thursday evening where a total of 201 MPs voted for it and only 91 voted against, Canadian broadcaster Global News reports.

The text of the motion does not clarify what constitutes “Islamophobia” and has led many to speculate what that may mean in the future, with some critics fearing it could lead to Shariah law courts. This concern has led to the circulation of an anti-Shariah petition on the Parliament of Canada website, which has so far been signed by over 24,000 people.

Ms. Khalid, who was born in Pakistan and moved to the UK and then to Canada, said the definition of Islamophobia was: “The irrational hate of Muslims that leads to discrimination.”

When Conservatives asked her to remove Islamophobia from the motion, she said: “I will not do so, any more than I would speak to the Holocaust and not mention that the overwhelming majority of victims were six million followers of the Jewish faith and that anti-Semitism was the root cause of the Holocaust.”

Another part of the bill that has stirred controversy is the passage that asks the government to “recognise the need to quell the increasing public climate of hate and fear”. It is currently unknown what measures the government will take to “quell” “hate and fear” as the motion is not classified as a law and has no effect on current criminal law.

The Conservative Party of Canada are currently holding leadership elections and many of the candidates have come out against M103 including one of the frontrunners, Quebecer Maxime Bernier. Mr. Bernier, a conservative with libertarian free market leanings, said he voted against the bill tweeting: “Free speech is the most fundamental right we have. I am opposed to #m103. Canadians should be treated equally regardless of religion.”

Free speech is the most fundamental right we have. I am opposed to #m103. Canadians should be treated equally regardless of religion.#cpcldr

Prime Minister Justin Trudeau, who during the election campaign championed Muslim women wearing hijabs and full face niqabs, dropped an appeal by the previous government that would not allow women to wear niqabs to Canadian citizenship ceremonies.

Trudeau has also appeared at many mosques, including one where the women weren’t allowed in the main prayer room with the men but were forced to pray in a separate area upstairs.

The self-proclaimed “feminist” Prime Minister said: “Diversity is a source of strength, not just a source of weakness, and as I look at this beautiful room — sisters upstairs — everyone here, (I see) the diversity we have just within this mosque, within the Islamic community, within the Muslim community in Canada.”

Lorne Gunter wrote in the Edmonton Sun: “While purporting to oppose all forms of religious discrimination, the only form specifically mentioned is Islamophobia. And no definition of Islamophobia is given, leaving the door wide open to the broadest possible interpretations – including public statements condemning radical Islamic terrorism and even academic papers questioning whether Islam truly is a religion of peace.”

ITS basis reads as such:

That, in the opinion of the House, the government should: recognize the need to quell the increasing public climate of hate and fear;
Condemn Islamophobia and all forms of systemic racism and religious discrimination take note of House of Commons’ petition e-411 and the issues raised by it; and (c) request that the Standing Committee on Canadian Heritage undertake a study on how the government could
(i) develop a whole-of-government approach to reducing or eliminating systemic racism and religious discrimination including Islamophobia, in Canada, while ensuring a community-centered focus with a holistic response through evidence-based policy-making.

SIMPLY put, without “pretty boy” Trudeau and his love affair with all things Islam, such an anti-freedom law would have been squashed – post-haste. And as this site demonstrated in 2015:

CONSEQUENTIALLY, it is beyond imperative that patriotic Americans press their leaders to ban Shariah Law – whatever it takes – unless, waking up to the Canadian “model” is more appealing! MOST significantly, in relation to America (recognizing that Canada is lost to the clutches of Islamists due to enabling leftist counterparts and apologists), how much more intrinsic could passing the likes of Congressional Bill S.2230 be for the nation’s well-being, finally, designating the Muslim Brotherhood Mafia as a terrorist org?? Its updated version can be found here, if interested – https://www.congress.gov/bill/115th-congress/senate-bill/68/text

ON the other hand, doing nothing will mirror the outcome of Canada; as America too falls into the catastrophic web of Islam/Shariah Law! Submission. 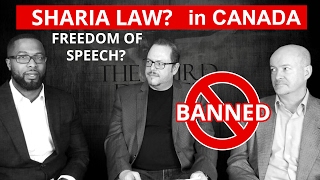