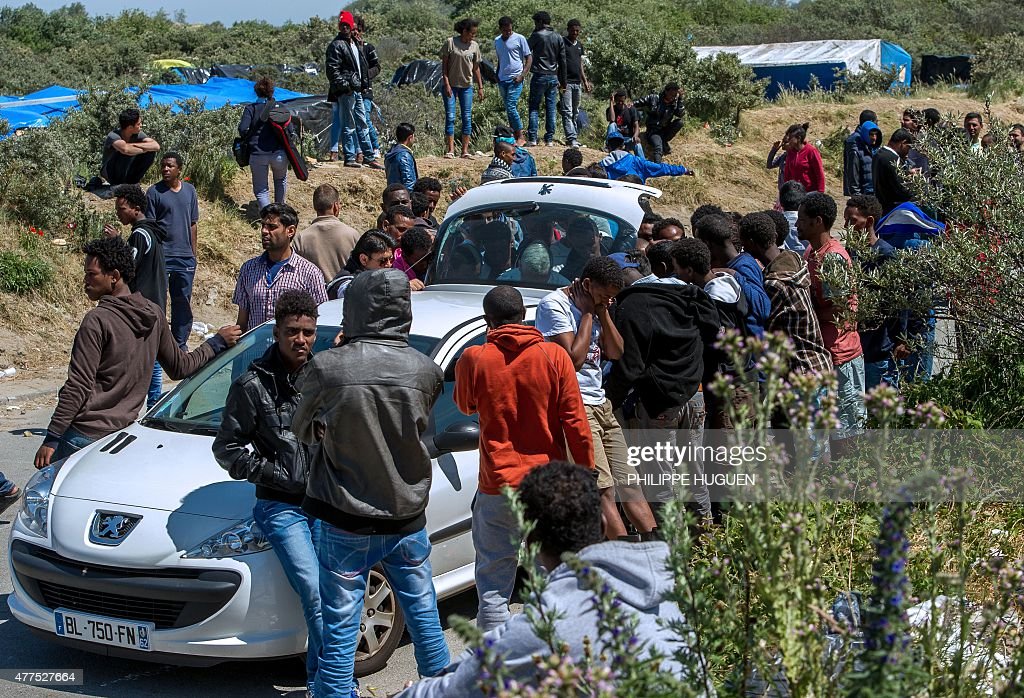 A mere few days before today’s explosion in Nice (we will get to that), littering its streets with blood and body parts during the annual Bastille Day celebration, the Mayor of Calais finally said: assez…enough. Pray tell, of what??

WELL, before Allah’s warriors laid siege to it, the city was described thusly: Calais is located on the Pas de Calais, which marks the boundary between the English Channel and North Sea and located at the opposite end of the Channel Tunnel, 34 kilometres (21 miles) from Dover. On a clear day the White cliffs of Dover can be viewed across the channel.[47] Aside from being an important port and boarding point between France and England, it is at the nucleus of many major railway and highway networks and connected by road to Arras, Lens, Béthune and St. Omer. Dunkirk is located about 47 km (29 mi) by road to the east.[48] Calais is located 288 km (179 mi) north by road from the French capital of Paris, roughly a 3-hour 15 minute journey.[48] The commune of Calais is bordered by the English channel to the north,Sangatte and Coquelles to the west, Coulogne to the south and Marck to the east. The core area of the city is divided into the Old Town area within the old city walls, and the younger suburbs of St. Pierre, which are connected by a boulevard.

CURRENTLY, this is a highly accurate depiction of Calais, another ! dying city:

Calais was once known as a cultural hotspot in northern France, with a five-kilometre beach that beckoned visitors to stay rather than pass through.
Now, tourists are being warned to close their car windows and lock their doors as they drive past.

ALAS, ever since 1999, Islam’s barbarians continuously invaded its space and the results have been nothing short of catastrophic. Predictably so. Jungle-like.

Calais is not just a “black spot” on Europe, but many Europeans look at is as the face of Europe’s future if Islam takes over.

It has taken a long time, but the French are finally pushing back against the Muslims in Calais. So much is the pushback that the mayor of Calais has promised to destroy a large part of the camp and displace thousands of Muslims in the process:

Thousands of refugees living in the so-called Calais ‘Jungle’ will soon lose their makeshift homes as the northern half of the camp is set to be demolished.

Calais mayor Natacha Bouchart told journalists on Monday that the remaining half of the camp would soon be dismantled, though no date has yet been given.

“We can’t wait any longer, we need to know as soon as possible when and how the Jungle will be torn down,” she said.

“It is absolutely urgent for this town, its people and its businesses.”

According to Reuters, the Calais prefecture, which would issue the order to demolish the camp, declined to comment on the matter yesterday. (source)

I say good for Calais and the French. It is about time they started standing up for themselves. As we have shown, these Muslims want nothing to do with European society except to rob it of all the good it has, destroy the west, and then blame the people who invited them in for the problems which they created.

Islam has no place in Europe. It never did, and it is about time Europe started sending these people back to the lands where they came from.

MIND you, America is on a mirror-image disastrous course. Simply put, not only are many cities becoming mini camps, overflowing with hostile followers of Islam (while others have actual jihadi training compounds gearing up for the final battle), but after numerous Islamic shootings ala San Bernardino, Orlando’s Pulse Club and elsewhere, know that truck/car bombs and IED’s are on tap.

MORE specifically, and on numerous occasions, this site has revealed that stepped-up tactics are in play for America’s cities, regardless of what officialdom states. In a nutshell, several highly-placed intel contacts gave the head’s up in this direction: again and again, interrogated terrorists are repeating a similar theme, that is, IED’s and truck bombs are next for America! You read that right.

EVEN so, HUSSEIN Obama, devil that he is, ratchets up the danger to the home front to an exponential level. Yes, he is in a furious race against the electoral clock to implant tens of thousands of additional war-fighting age “refugees” throughout the nation.

IN this regard, Islam’s latest monster, Tunisian-born Mohamed Lahouaiej Bouhlel, utilized a tried and true tactic in Nice, that which has been very effective in Israel: car/truck jihad! In fact, the same modus operandi – ram + shoot + lob grenades (if possible) – has been repeated countless times. Oh well, looks like it’s Europe’s turn. Nice’s.

At least 84 people were killed when a huge truck drove into crowds celebrating Bastille Day in the French Riviera town of Nice on the famous Promenade des Anglais seafront Thursday night in a horrific Islamist terror attack. Hundreds more were injured.

From the initial investigation of attack in the French resort city of Nice, it is clear that the large truck used to run down dozens of people on the promenade was carefully prepared for the attack, DEBKAfile‘s counterterrorism sources report. .

The windshield and apparently the side windows of the cab were made of bulletproof glass. In other words, the driver carried out the attack while sitting in the protected cab that he had built for himself. It was the first time for this method to be used by terrorists.

Our sources point out that if the police in Nice, who have already been on a terror alert for an entire year, had been properly prepared for the large-scale event on a national holiday, they would have had more powerful and effective weapons that would have hit the terrorist as he sat in the driver’s seat, or at least been able to stop the truck by puncturing its tires.

Fire from the kind of handguns used by the Nice police cannot stop a speeding truck of this kind.

As it was, the terrorist lived to jump out and open fire on the crowds before being gunned down himself.

PREDICTABLY, regardless of the origin of birth of any given Mohammedean, the fact of the matter is that they all serve Allah, be they from Tunisia, Syria, Iraq, Libya, Iran, America, Europe, Israel, and so on and so forth. Indeed, their common denominator is, as always, Islam!

“Oh France, you and the all Europe will never be secure until we will live secure on every inch in the land of the Caliphate,” wrote one ISIS supporter whose Twitter account has since been suspended. “This is the beginning of the attack to take the holy revenge for the killing of Abu Omar Shishani, may Allah accept him,” a jihadi posted on the ISIS al-Minbar forum shortly after the attack.

(Translation: “Oh France, you and the all Europe will never be secure until we will live secure on every inch in the land of the Caliphate.”)

CONSEQUENTLY, anyone who still denies that the west is not engaged in a World War is simply in deep denial – or worse. Not only that, this war is not confined to one part of the globe, rather, it is global! You got that?

MOST significantly, the leadership of the free world – under HUSSEIN Obama’s two-term reign of terror, domestic and foreign – has turned against the west’s accepted norms. And this is precisely why Allah’s Muslim Terrorists – be they Sunni ISIS, another of their Brotherhood hydras, or Iran’s Shia forces and their proxies – are going from strength to strength, all the while western forces run around chasing their tails, behaving like the storied Keystone Cops.

INCONTESTABLY, their agencies are left to mop up blood-soaked streets and retrieve body parts. This is hardly hyperbole. In fact, Israel has been the “laboratory” for jihadi terror for many decades. Hmm.

TO wit, to those left struggling for answers, querying, what is the underlying key and core to this global war, the following is duly instructive: while there are many layers to this most salient and grave question, this Brotherhood Mafia expert will boil it down to its microscopic size:

Given two antagonists—one a moral relativist, the other a moral absolutist, then, all other things being equal, the absolutist is more likely to persevere and win in any protracted conflict.

AS to “who’s on first” – aka the moral relativists – well, that’s not hard to figure out: leftists and their cultural Marxist milieu, in charge of America and Europe. Israel too. As to “the other” – aka the moral absolutists – that too is a no-brainer: Allah’s Muslim Terrorists!!

( “Tent villages” in Calais, soon to be demolished!)