WHILE certain players front for the downfall of America for divergent reasons, the fact remains that the end results are the same: the evisceration of western civilization.

THAT being established, most westerners are somewhat familiar with the dangers related to Sunni Saudi Arabia and Shia Iran, but their proxy pawns are given little afterthought. Grave error.

IN this regard, Qatar is shielded from the spotlight and it is not for nothing. In a nutshell, they are in bed with Washington (western nations, alike) power brokers. Moreover, let’s push aside reports re regional rivalry between Saudi Arabia and Qatar over oil and natural gas issues because both want the same ultimate outcome: Islam as the supreme ruling force over the world! No kidding.

IN any case, Qatar is hardly treated as delicately at this site, and that, too, is not for nothing. Boo hoo.

CONSIDER: why exactly did HUSSEIN Obama send TOP Taliban ISIS terrorists – released from Guantanamo ala an “exchange” for traitorous Bergdahl – to Doha, Qatar? Why, indeed.

NOT only that, Hamas is neck-deep with Qatar’s Brotherhood Mafia and this is where it’s at.

Qatar’s top diplomat on Monday dismissed as “just rumours” an Israeli claim that Doha agreed to expel a leader of Hamas, saying he is a “dear guest”.

“These are just rumours that are targeted at changing Qatar’s policies toward the Palestinian people. Khaled Meshaal is a dear guest in Qatar and he is in his country,” he told reporters in response to a question during a news conference with his visiting Venezuelan counterpart, Delcy Rodriguez.

Hamas officials in both Qatar and Gaza earlier rejected the claim that Mr Mashaal planned to leave Qatar.

MORE specifically, “bag-men” often hide in plain sight, and Qatar’s are all over Washington’s power centers. Bought and paid for. To wit, it is into this Islamic spider’s web that PEARSON Publishing enters the fray. Again, bought and paid for. Consider the rest of the publishing houses as tag-alongs.

INTRINSICALLY, without the complicity of major textbook publishers, well, the likes of Qatar (and others) wouldn’t make any headway into indoctrinating and penetrating America’s kiddies. No doubt. As is said….the proof is in the pudding….caught with one’s pants down….and so on….

Islam is in and Christianity is out, the Founding Fathers are just “dead white guys,” “D**n the Second Amendment,” and people who oppose Common Core are “idiots.” These are just a few of the sentiments expressed by a former marketing executive for textbook publishing giant Pearson Education, as she reveals on hidden camera that the federal government’s Common Core and Advanced Placement U.S. History framework are designed to indoctrinate America’s children with a leftist world view.

Kim Koerber made the startling comments in the third video (below) of a Project Veritas series on Common Core, the controversial educational scheme Barack Obama has sought to impose on states nationwide. As Project Veritas reports, the former Pearson insider, “who now works for National Geographic, was caught on camera justifying the Common Core curriculum on the grounds of anti-American and unconstitutional values. ‘People that are not educated, Fox TV viewers, think that Common Core comes from the educated liberal groups and that’s why they are against it…,’ revealed Koerber to undercover Project Veritas journalists.”

Critics might wonder how Koerber would react if Martin Luther King were diminished by being characterized as merely a “dead black guy.” Regardless, history is what it is, not what social engineers might wish it to be. The fact is that all 56 signatories to the Declaration of Independence and all those who crafted our Constitution — the very foundation for our government — were white men.

But while this anti-American spirit characterizes Common Core, it’s nothing new. As I reported in 2006, “In the textbook Creating America (A better title would be Creating History), the authors identify 10 representative American heroes. But while neither Thomas Jefferson nor Benjamin Franklin was among them, the list does include: Abigail Adams, Elizabeth Cady Stanton, Ida B. Wells, Queen Liliuokalani and … Zitkala-Sa…. Yet another book had five pages about Marilyn Monroe but only five lines about George Washington.”…..

Project Veritas: Christianity is totally out of the common core?

Koerber: Yes it is, totally. It’s not a core concept at all.

Project Veritas: But then there is a mention of other religions like Islam.

Koerber: Yeah well you have to because…

Project Veritas: So how did Islam get worked in?

In the same vein, Koerber also said that it’s “offensive to have these [Christian] prayers in the school board.” The reality, however, is that Congress has opened with prayers from the time of our nation’s very founding, evidencing how government — even the central government — could acknowledge God’s providence and appeal to Him for guidance. The phrase “the separation of church and state,” which Koerber claimed conservatives “don’t understand,” is not in the Constitution because it was a minority view when the document was crafted; and even among that minority, the “separation” involved keeping government out of religion, not religion out of government. As for the Establishment Clause, it merely prohibits the creation of a national church. Anyone saying otherwise is making the tacit claim that he understands the Constitution better than the men who wrote it.

While Koerber condemned conservatives for supposedly not wanting to teach all of the Constitution, she seemingly contradicted herself, saying that you “should know a little bit about” the document but “shouldn’t have to memorize the thing” and that it’s “not a necessity for the kids.” She also wasn’t very fond of some of it, saying “D**n the Second Amendment. I don’t think personal handguns need to be on anyone except the government, the police. What is the purpose of having a gun?” Of course, one could then ask: What’s the purpose of the police having guns? If Koerber can answer that question, she’ll be able to answer her own. Note that the Supreme Court ruled in 2005 that the police have no constitutional obligation to protect you from harm.

Koerber’s apparent contempt for our history and traditions not surprisingly extended to the old West. While defending Pearson’s insistence on relating to schoolchildren that there were prostitutes present during that era (as if that’s unusual), she said, “The Wild West was not a nice place. And our kids need to know that that’s what it was like, you know.”

The truth, however, is that the “Wild West” wasn’t all that wild. As the Independent Review wrote in its 2010 essay “The Culture of Violence in the American West: Myth versus Reality”: “Contrary to popular perception, the Old West was much more peaceful than American cities are today…. Actual history concludes that the civil society of the American West in the nineteenth century was notvery violent.” The notion of a “Wild West” largely comes from Dime Western novelists, who, like modern filmmakers, fictionalized accounts of frontier happenings in order to make money and entertain the public.

Yet despite Koerber’s apparent ignorance, she calls opponents of Common Core “idiots.” But she also reveals that the textbook companies, in collusion with the government, are playing Americans for fools. Alluding to how Common Core is a money-making scheme, she revealed, “Anytime a change happens that has to be put in a textbook, suddenly the school district has to adopt new books.” Ka-ching.

The good news is that a great number of states are rejecting Common Core, and presidential hopefuls are speaking out against it. As Project Veritas writes:

“Nobody can win when you’re in favor of Common Core. It’s a disaster,” said Republican presidential candidate Donald Trump [speaking to a South Carolina audience]….

“I haven’t seen the video on Common Core,” said Senator Ted Cruz. “I saw that he [PV head James O’Keefe] did it. I’ve seen a lot of his other videos…. I’ll tell you this, as President I will instruct the Department of Education to end Common Core on day one.”

“The real issues for Common Core is the elites in our culture who want to indoctrinate our young people into a certain way to think, a certain belief structure, and it’s all spread out through Common Core,” said former Pennsylvania Senator Rick Santorum.

For sure. And as Abraham Lincoln warned, “The philosophy of the school room in one generation will be the philosophy of government in the next.” Common Core today — communist corps tomorrow.

NOW, being that common core has received mega “face-time” within these pages, it would be beyond negligent not to tie in the fact that HUSSEIN Obama’s fingerprints are all over it.

MOST significantly, he started his “outreach” to the Muslim community via an apology tour to Cairo, Egypt (June 2009) and the Brotherhood Mafia was front and center. Thus, fast forward to the last leg of his two-term reign of terror as POTUS and he is coming full circle. Specifically, for the first time as POTUS, he will visit a mosque on domestic soil, and he chose one which is so steeped in ties to Brotherhood Mafia front groups, well, it would make a whore (and her pimp) blush. Besides, as he lifts the veil to his authentic roots, isn’t it high time that folks admit: yes, HUSSEIN Obama is both a cultural Marxist and an Islamic devotee! If not, how many times does he have to poke his bony fingers toward Americans for them to arrive at said conclusion? Incontestably, he already made his first admission in 2009 and gave a “smoking gun” clue at the Multi-Faith National Prayer Breakfast in Aug. 2015. Sheesh.

MIND you, the reds and greens have been in bed for so long, trust, it is hard to know where one begins and the other leaves off. Incestuous. Alas, for the reds, any evisceration of the underpinnings of Christianity and Judaism is the main goal — indeed, this is the precursor to America’s destruction. Resultant, U.S. leftist infused academia is more than pleased to introduce their students to “exchange and leadership programs” within Brotherhood steeped Qatar. Other nations of similar outlook are equally embraced.

INDUBITABLY, dawah-like, Allah’s Muslim Terrorists are beyond pleased to accommodate — even if they eventually (more than) butt heads when all is said and done. Yes, the enemy of my enemy is my friend!

(College Station Aggies started our first full day in Qatar with a delicious breakfast at “The Campus,” the hotel hall that is attached to the male housing building in Education City.) 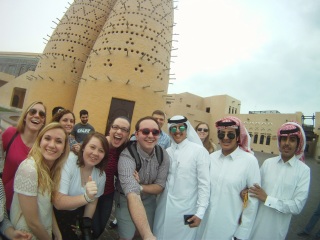