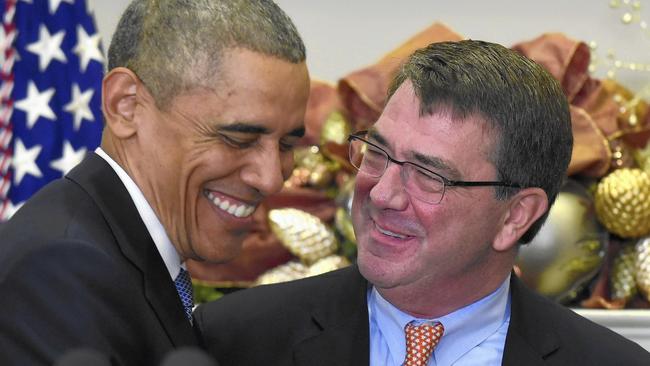 AS always, the saying, “the fish stinks from the head up”, is more than appropriate, especially when dealing with the poisonous fallout spewed from HUSSEIN Obama’s two-term reign of terror.

BUT before we segue to the heart of the matter, it is imperative to understand that even those who are endowed with intellectual heft can fall prey to the heady enticement and allure of power politics, despite knowing full well when smoke is blown their way. Intellectual whores. Such is the case with Ashton Carter, Secretary of Defense. In fact, it is inarguable that a man steeped in theoretical physics, as well as having been a professor of science and international affairs alike, is, by all objective standards, an intellectual heavyweight. Let’s just stipulate that this is the case.

YES, the position of Secretary of Defense is such that the only person above him is the POTUS as Commander-in-Chief. Therein lies the crux and the danger.

IN this regard, few are unaware of the Pentagon’s sissy-pants “yes-men”, and the following is more than emblematic of the same:

NOW, it is impossible for anyone, unless comatose, to deny Islam’s carnage all over the Mid East and Africa, even as it creeps closer to America, Europe, and the west in toto.

MOST recently, Nigeria’s Christians were targeted through mass burning of Churches and attacks on villagers. However, once again,  HUSSEIN Obama plays deaf, dumb and blind. Why is this?

EVEN more so, let’s recap:

ASSUREDLY, HUSSEIN Obama is complicit in the slaughter of Christians and minorities. The evidence is clear.

SO, is it not the case that a war is being waged against Christianity (Judaism alike) within the regime of Obama Inc.? If not, why not?

MORE specifically, Christian heads are sawed off in Nigeria, and this too elicits silence. How could this be possible? “It be.”

THEREFORE, the conclusion is: while Christianity is systematically razed under the watchful eyes of HUSSEIN Obama, its purge by Islam’s barbarians is “acceptable” to Obama Inc. Realistically, what other conclusions can be drawn?

MOST significantly, rational folks know that many intelligent people have been found to engage in whore-like behavior. In other words, as is said, “Power tends to corrupt, and absolute power corrupts absolutely. Great men are almost always bad men.”

STIPULATED, whereas Ashton Carter is the head of the U.S. Military and is clearly a highly intellectually endowed individual, the fact remains that as Secretary of Defense he is in sync with talking points given by his subordinates. Thus, the following extraordinary, bizarre, counter intuitive, and mendacious lie must be judged for what it is:

After a 1,400-year-old Iraqi Christian monastery was recently destroyed by the Islamic State (ISIS) most of the world condemned the demolition — except for spokesman for the U.S. military’s Operation Inherent Resolve, Col. Steve Warren.

“Thousands [of Iraqi Christians] have been killed, hundreds of thousands have been forced to flee,” noted CNN’s Wolf Blitzer in an interview with Col. Warren last week.  “There is legitimate fear – you’re there in Baghdad – that the long history of Christians living peacefully, productively in Iraq, is coming to an end.  How worried should we be about the Christian community in Iraq?”

The response: “Wolf, ISIL doesn’t care if you’re a Christian … We’ve seen no specific evidence of a specific targeting towards Christians.”

Wrong:  Roughly two-thirds of Iraq’s 1.5 million Christian citizens have been killed or forced to flee the country by ISIS and its jihadi predecessors over the past decade—and this has everything to do with their religious identity.

In Iraq and everywhere else it has conquered, ISIS has, at a minimum, rigorously enforced on pain of death Islam’s dhimmi laws, which require Christians to pay extortion money (jizya) and agree to live by a set of degrading rules.

Often, ISIS fighters skip these formalities and simply torture to death Christians who refuse to convert to Islam, sometimes releasing the footage online for propaganda purposes. Most notable are two videotaped mass executions of 21 Egyptians and 30 Ethiopians in Libya last spring, but there have been many lesser-known cases.  When a group of Iraqi Christian children refused to renounce Christ in 2014, saying “No, we love Jesus,” ISIS decapitated and mangled their bodies. Last summer in Aleppo, Syria, ISIS tortured, mutilated, publicly raped, beheaded and crucified 12 Christians for refusing to convert.  Escaped eyewitnesses have reported ISIS places Iraqi and Syrian Christians in cages or coffins and sets them on fire.

ISIS has frequently kidnapped Christians and demanded ransom payments for their release, often forcing female captives into sexual slavery. A 12-year-old girl, raped by an Islamic State fighter, was told that “what he was about to do was not a sin” because she “practiced a religion other than Islam.” ISIS has even sent operatives disguised as refugees into U.N. refugee camps in Jordan to kidnap young Christian girls to sell or use as slaves.

The Islamic State is committed to expunging all physical traces of Christianity in areas it conquers, demolishing dozens of ancient churches—in Syria alone, up to 400 churches have been destroyedsince the war—not to mention countless crucifixes, statues, graves, and other relics.  It  ordered the University of Mosul to burn all books written by Christians and decreed that all schools in Mosul and the Nineveh Plain that bore Christian names (some since the 1700s) be changed…

RESULTANT, back in September 2014, due to the lying jive-talk via HUSSEIN Obama and his mouthpieces, it became increasingly clear that Islam’s barbarians were ratcheting up their slaughter of Christians, Jews, and other minorities with nary a whisper of push back from Obama Inc. Thus, it became incumbent to set the historical record straight, and the following was meant to serve as a testimonial: ISIS, Islam And Obama: Understanding The Threat To The Free World.

In summation, the silence accompanying the slaughtering of Christians may well parallel “the unbearable burden of shame which lay upon the shoulders of the world community of silent bystanders after the Holocaust.” http://tech.mit.edu/V124/N6/_[LTE]The_.6l.html ….continue reading…

IF anything, a year and a half onward, the situation is even more dire. Still yet, HUSSEIN Obama’s silence is deafening, as is Ashton Carter’s and the rest of the administration’s wretched surrogates!

YES, the G-d of Abraham, Isaac, and Jacob will be the ultimate judge of their complicity, and the pagan moon-god Allah will play no part!