IN no uncertain terms let’s be crystal clear: If the U.S. survives the onslaught from Islam’s barbarians it will be due to the heavy lifting of patriots, many of whom are vets, retired law enforcement, and assorted others.

THAT being said, once the final confrontation (Phase 5 of “The Plan”) ensues it will be off the charts. This is definitely an on target assessment because jihadis enjoy the protection of U.S. leadership. In tandem, they burrow inside the recesses of Muslim enclaves throughout the entire nation, thus, evincing an unprecedented threat level.

STIPULATED, it is hardly news that HUSSEIN Obama is cheering them on and waving them through. This charge doesn’t necessitate any more evidence, other than what has already been presented at this site. Bullet-proof. Even so, countless are displeased with said spotlight, and they make their views known in various ways. Regardless, the following bears repeating: Too damn bad! Besides, do they really believe that their whining, threatening and castigating will stop the truth-telling, as if this investigative journalist cares to placate their barbaric worldview? Ridiculous.

ALAS, it is within this deadly terrain that many helping hands operate alongside the Islamist-in-Chief. In this regard, a preponderance of chief players have been outed within these pages. Still yet – aside from the well known suspects and surrogates – there is one who continuously skates through the cracks, almost as if she is too hot to handle. Agreed, a teflon prima donna. Grave error.

YES, few inside and outside the Beltway – other than ex Rep. Michelle Bachmann – dare to out her, although she has been front and center at this site since its inception (June 2012). This is untenable. Un-American. What’s going on?

AS an update to her treachery in relation to Hill’s emailgate, it was reported in Aug. 2015:  It is under Hill’s (Bill’s alike) crooked wings that Huma Abedin’s Islamist control over key FED power centers in America flourish. But before we head to the specifics, it must be understood that for the Bonnie and Clyde couple of US power politics the impetus is two-fold: Ideological AND financial. And it is through the criminally constructed Clinton Foundation that much of the nefarious anti-American activity is funneled. Indeed, tailor-made for RICO charges! Alas, some of it will be detailed below via Clinton’s Inc.’s sell-out to the Arabs ala “port deals.” Patience, dear readers…

The racketeering, influenced and corrupt organizations, or RICO, case alleges the former first couple and their family philanthropy traded political favors for donations or generous speaking fees for Bill Clinton while his wife was the nation’s chief diplomat.

IN this regard, to find out what her background really means for America, don’t be distracted by her exotic looks, but do pay attention to her deep associations within the hierarchy of the Brotherhood Mafia.

SO while hunting for Hill’s missing emails, it is imperative to unmask Huma’s part in it and her attendant Brotherhood trail. Rest assured, aside from her boss’s grave breach of ethics and worse, Huma Abedin’s VERY deep terror ties will pop to the fore. Yes, they wend to the tippy top of the Islamist spear because she is a main Brotherhood implant, as well as Hill’s joined-at-the-hip mate. That close.

THE questions become: Despite all the trails of evidence (much of it housed for safekeeping), why is it that she feels so insulated from any punishment? Could it be that this Muslim Brotherhood Mafia-bent diva of hybrid Pakistani-Indian parentage feels completely immune from retribution, regardless of all her treachery? Thus, once again, she struts her stuff, all the while hectoring the American people and poking fingers in their eyes. Imagine that! Beyond chutzpah. Wildly mendacious and dangerous.

NOW, it is not a secret that patriots are becoming increasingly riled up and fed up. However, their voices reached a crescendo when the Islamist-in-Chief announced his latest dictate: The U.S. will become “home” to upwards of 200,000 Islamic “refugees”, most of whom are male and between the fighting age of 18-45! Resultant, real Americans have enjoined: Hell no!!

SO, highlighted within this mix of patriots, Jon Ritzheimer, a former Marine, emerges. Not only that, his clarion calls have reached these pages, and, if anything, they have amplified.

BUT just to backtrack a bit, the following was recently reported:

THUS, as patriots have come to expect (despite threats from head choppers and their allies within America) he (and others) carries on the struggle. Along this trajectory, indeed, westerners must never show fear and run. This is hardly armchair advice.

INDUBITABLY, how many patriots agree that Islam’s barbarians not only deserve to be monitored, but must be kept in the gun sights of all who care about the safety and security of their loved ones and the nation at large? Rhetorical.

Jon Ritzheimer, the Marine Corps veteran who organized a protest at an Arizona mosque, told the Conservative Firing Line Tuesday that he is considering legal action after an article at the Islamic Post accused him of making death threats in a video posted to a Facebook page.

The article also demands the “immediate arrest and detention” of Ritzheimer, claiming that it has been “collaborating with federal, state and local police officials who have increased patrols around its American villages particularly Islamberg, NY located 45 miles southeast of Binghamton.”

Ritzheimer, however, denies the claim, calling it “100% false.”

“If I made threats I would have been arrested,” he told me.

“Whoo! What’s up America?” Ritzheimer says at the beginning of his newest video.

He is seen driving as a passenger in a vehicle. He says he is on his way to New York to confront writers at the Islamic Post, for calling him “the real terrorist.”

Following the terror attacks in Paris last week, Ritzheimer says he is ready for the terrorists, as he cocks his pistol.

“I’m urging all Americans across the U.S., everywhere in public, to start carrying a slug rifle everywhere,” he says. “Don’t be a victim in your own country.”

While ABC warned viewers to be careful following that advise, it reported no threat made by Ritzheimer or anyone else in the video.

Residents of H. Islamberg have been vigilant on the heels of a Facebook video rant made by Ritzheimer on November 18, 2015. “We are driving all the way to New York to see those [expletive] at the Islamic Post who called me a [expletive] terrorist.” Brandishing a pistol Ritzheimer says, “We are [expletive] ready for ‘em! Bring it on you Muslim [expletives]!  I’m urging all Americans to start carrying a slug rifle”, he yelled into the camera. Before being removed from Facebook the video had hundreds of “likes” and comments in support of the former Marine.  Ritzheimer is in violation of the FACE Act which is the federal law which protects houses of worship from those who “intentionally injure, intimidate or interfere with or attempt to injure or immediate or interfere with any person lawfully excising or seeking to exercise the First Amendment right of religious freedom at a place of religious worship,18 USC 248.

The FACE Act was originally intended to silence pro-life protesters at abortion clinics, but can also be used to protect houses of worship.

Tahirah Amatul-Wadud counsel for TMOA, is quoted as saying: “Ritzheimer’s rhetoric and incendiary comments and conduct will cause other misinformed citizens to act with violence and hatred toward their fellow Americans. We hold him responsible for any untoward acts that may result from his videos, pictures and calls to action against Muslims.”

The article also says Ritzheimer’s reaction is in response to a June 2015 article in which it referred to the Marine veteran as “an American Taliban.”

“The moniker American Taliban is what we give to American domestic right-wing extremists who personify the behavior of the Taliban like those in Peshawar Pakistan who burn schools and kill children. Ritzheimer fits the bill by virtue of his orchestrated armed Mosque protests and inciting hate against Muslims,” said spokesman Muhammad Matthew Gardner.

There’s only one problem.  At no time has Ritzheimer ever engaged in the acts Gardner cites.

Ritzheimer told ABC15 the reason for his message.

“They go after the weak, the innocent and the unarmed,” he said. “I don’t want to see any more bloodshed in this country than we already have.”

ABC’s video report can be seen below:

Ritzheimer told me he would be willing to pay an attorney two-thirds of whatever award he receives if he “planned to sue for $15 million like the clock boy.”

MOST significantly, Muslim jihadists really believe that they can turn the tables on patriots by invoking THEIR civil rights, all the while they plot to slaughter Americans! Mind you, it is not for nothing that their arrogance is over the top. This is doubly so because they are Islamic supremacists, as well as understand that they have the full muscle of Obama Inc’s FED protection forces on their side!

EVEN so, while the jacked-up Muslim Brotherhood Mafia’s Islamic Post has the balls to call for a patriot’s “immediate arrest” (going so far as to conflate increased local law enforcement patrols at Islamberg as a red herring), the fact of the matter is that inside Islamberg (as well as at major compounds throughout America) the likes of said jihadis are actually TRAINING to slaughter as many Americans as they can  – once the orders are given from their top leadership! Yes, this investigative journalist knows this for a fact.

INEXTRICABLY, let there be no doubt: The activities of Huma Abedin are “atypical” of the Islamic doctrine of muruna. Know thy doctrines well!

PATRIOTS, once schooled, should be able to link the likes of open jihadists – those Jon Ritzheimer and others are warning about – to ones who fly under the radar, akin to Huma Abedin. It is this linkage which will finally “square the circle” re the enemies within, that is, whether they dress in Islamic garb as out-and-out Islamists, wear suits and ties like CAIR’s mouthpieces, or designer duds like chi-chi Huma, one of the most dangerous Brotherhood/Sisterhood operatives in America!

OH, as repeatedly stated, the FEDS are up to their eyeballs in protecting them!! 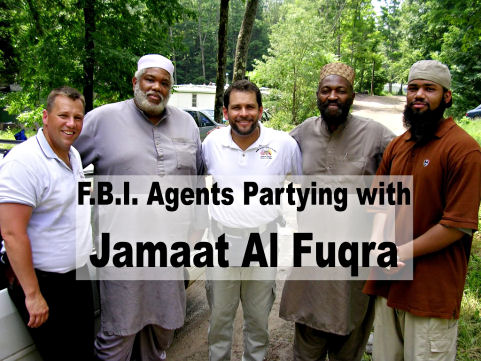 12 thoughts on “Islamic Barbarians Inside America Threaten Patriots:Vets & Others Uncowed! Huma Abedin In The Mix. How Will This End? Commentary By Adina Kutnicki”