THE plan to arrest lawmakers who voted “yea” for the nuclear “deal” with Iran – let alone HUSSEIN Obama, the biggest outlaw of all – is decidedly righteous. Let’s just place said ethos on the table. Stipulated, it would be a day of national (and international) celebration, one which would assist in restoring America’s honor. A reckoning. A holiday.

EVEN so, before we get into the particulars of these publicized arrests, it must be understood that two converging issues are at stake: Rooting out treasonous leaders, as well as smacking down Iran’s mullahs. Without a scintilla of a doubt, they are mega terrorists, as such, responsible for an infinite amount of American deaths, not to mention scores of innocent victims worldwide.

NOT only that, incessantly screaming, chanting, “Death to America”, renders any agreement – let alone a nuclear one – null and void. A non-starter.

INDUBITABLY, Iran is spiking the football over the slanted nuclear giveaway, as well they should be. Mission accomplished:

STILL yet, and not to be lost in the discussion, Congress is very aware that they are signing onto an agreement with those who VOW to wipe Israel off the map, America’s best ally in the Mid East, and perhaps worldwide. In effect, said lawmakers will be aiding the mullahs in their genocidal quest! No doubt.

Page 142 of the nuclear agreement reads:

Co-operation in the form of training courses and workshops to strengthen Iran’s ability to prevent, protect and respond to nuclear security threats to nuclear facilities and systems as well as to enable effective and sustainable nuclear security and physical protection systems [boldface added];

Co-operation through training and workshops to strengthen Iran’s ability to protect against, and respond to nuclear security threats, including sabotage, as well as to enable effective and sustainable nuclear security and physical protection systems.

NOW, many are familiar with ex Rep. Colonel Allen West. Yes, THAT straight up American hero. In fact, being familiar with the inner workings of Congress, he is more than qualified (on multiple levels) to gauge what constitutes treasonous activity.

The Democrats have already committed treason in arming our enemy with nuclear weapons, and Lt Col Allen West comes as close to making that public condemnation as possible without actually saying it. The point is made, and he’s right. They attempted to remain anonymous and protected from accountability by utilizing a filibuster, with Mitch McConnell’s blessing and approval, to hide in the legislative weeds of public ignorance. Their supporters are Democrats, so they are largely ignorant and apathetic and their tactic will provide the political cover. There’s no similar protection for the American people from the impact of their treason.

Judge Pirro plays a clip of the pathological lying occupant of the White House proclaiming that “America is winning right now” and “America is great right now.” Of course we aren’t and it isn’t and everybody knows it, including the America-hating snake that made the proclamation.

Lt Col Allen West offers his views on the remarks of our imitation ‘president’ and the subversive operatives working in concert with him towards our national destruction, including those within Congress.

West notes that our unemployment rate is around 30% and that the workforce participation rate is the lowest it’s been in approximately 37 years. He points to the Russia entrance into Syria as well as the “idiotic” Iran deal as further evidence of the decline in American influence.

After noting that Hussein Obama is for all intents and purposes able to operate outside of the law, they address his failure to provide the required information in the Iran deal. That leads into a question of just why are the Democrats who protected his anti-America deal through a filibuster putting their leader ahead of their country. What they are guilty of is treason and West asks in a slightly sanitized version whether or not we are getting very close to a sense of treachery and treason against the United States of America.

He only made the point for one reason; he knows we’re already there.

West underplays the threat in addressing the underlying reason or whatever reason at this time. Pirro asks what Obama gets out of this, with West indicating it is only an exhibit in his ‘presidential’ library.

That response completely discounts the foreign hijacking of our presidency, the only legitimate explanation for what is going on, particularly with all of the various assaults taken as a whole.

Nothing else makes sense. The long-ago stated objective of taking control of at least one political party has resulted in our communist enemies, of some variety, taking control of the White House. What they are doing is exactly consistent with that eventuality. West must be aware of it; he’s just keeping his powder dry for now.

BACK to the planned arrests….

MORE specifically, what about the fact that the FBI bowed – once again – to Islamic supremacists, when they essentially opined: “Jon Ritzheimer must shut the hell up, so you better investigate him!” Hmm. They did. Incidentally, those of us who follow such matters are hardly shocked, but no less outraged: “FBI hires special agents from Brotherhood Mafia’s ADAMS Center.” Alas, how fast can you say: Captured agency!

SO when news came down that the aforementioned former Marine put out a call to fellow patriots – to execute their Constitutional right to arrest those who committed treason – well, the non-equivocal reaction on this end was: Go get ’em…

A man identifying himself as an “Oath keeper” and an “American Patriot who has everything to lose” threatened to arrest lawmakers who support the Iran nuclear deal, beginning with Sen. Debbie Stabenow, a Michigan Democrat.

Capitol police are now investigating an open letter written by Jon Ritzheimer, an Arizona resident who attracted FBI attention when he organized an anti-Muslim protest rally and a “Draw Mohammed” cartoon contests at a Phoenix mosque in May. Mr. Ritzheimer wrote that he and an armed militia plan to arrest Mrs. Stabenow for treason.

“We are planning on arresting Senator Debbie Stabenow, who voted yes to the Iran Nuke Deal. She will be arrested for treason under Article 3 Section 3 of the Constitution,” Mr. Ritzheimer wrote, Roll Call reported.

“We have chosen her as our first target due to our strong ties with the Michigan State Militia and their lax gun laws that will allow us to operate in a manner necessary for an operation like this,” the letter continues.

Mr. Ritzheimer, a former Marine, wrote that after successfully detainingMrs. Stabenow, he and his militia “will continue to move across the country and arrest everyone involved with the Iran Nuke Deal” including President Obama, Roll Call reported. He is also seeking donations for his mission.

In an email to The Washington Times, Jason Van Tatenhove, media director for the Oath Keepers, stressed that Mr. Ritzheimer is “merely a new member of the Oath Keepers, having newly joined in July,” and holds no leadership role in the organization.

Capt. Kimberly Schneider told Roll Call in an email that the U.S. Capitol Police “are aware and are working with local law enforcement in Michigan on the matter.”

But Mr. Ritzheimer said he has already notified law enforcement about his intentions and plans to cooperate with them “and try and keep this as smooth as possible so we don’t have another ‘Shot Heard Round The World’ situation on our hands,” Roll Call reported.

MIND you, while the national leadership of the Oath Keepers are distancing themselves from said lawful action, surely there are local contingents who are on board, and Michigan’s Militia is likely one such address. It must be noted that many who sit atop leadership positions are often the ones who turn tail first, thus, distancing themselves from any fall out. Cowards. Power hungry comes to mind too, as opposed to morally principled.

MOST significantly, knowing what you do about Obama Inc.’s FBI – an absolute captured agency – guaranteed, they will do everything to arrest real patriots, as opposed to those who commit treason at the highest levels.

RESULTANT, what is really at issue is the total shredding of the Constitution, in this case, Article 3 Section 3. Intrinsically, there is nothing unlawful about Sen. Stabenow’s arrest – as a “test case”, you gotta start somewhere –  in so far as she is on record supporting a deal which will inevitably allow the world’s most dangerous weapons to remain in the hands of the foremost sponsors of worldwide terrorism. Understood? 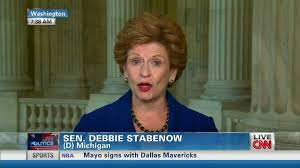 ALAS, does anyone wonder why America is falling off a cliff? Yet, despite all the efforts of traitors, their lackeys, and assorted blow hards, some will be remembered as the heroes of our time!

{re-blogged at Joe for America}