WHILE no man is an island, even more so, nations seek out alliances and so-called partners. This is all well and good – up to a point.

IT is especially the case when it comes to the highly “delicate” relationship between the  U.S. and Israel; the twin pillars of western civilization. Now, while one is the superpower of the world – take a guess as to “who’s on first”? – the other is the only democratic based country in the most repressive and violent region of the world, the Middle East. Resultant, it makes geo-political sense that countries with shared values align – again, up to a point.

AND it is recognizing when going it alone is the best strategic course of action,  as opposed to cooperative efforts, which necessitates statesmanship – an intangible attribute in very short supply. Dangerously elusive.

IN this regard, while chasing ISIS out of key arenas within Syria and Iraq is in the interests of both nations (others in the region alike, whose authoritarian grips are threatened by ISIS’s scorched earth tactics, still yet, their Islamic ideologies are in sync….welcome to the netherworld of Mohammedans), Trump’s advisers have aligned the U.S. with Iranian, Russian, Syrian & Iraqi Shite interests.

INCONTESTABLY, they have trained and empowered Iran’s terror proxies. This has enabled Iran, the most dangerous sponsor of worldwide terrorism, to entrench itself with an even deeper foothold in this volatile, fiery, and strategically important region. Now, how does this alliance benefit American interests and security? Asked and answered.

YES, a (recent) picture is worth a thousand words. Shi’ite militiamen              (read: Iranian-controlled) are operating US MI Abrams tanks….with a Hezbollah flag affixed to it!! Just for the record: mind you, to learn how to drive it, training by an AMERICAN adviser is necessary. So, as long as Iran’s militiamen don Iraqi uniforms – a so-called U.S. ally, though long since under Iranian control – they are good to go. Therefore, A + B = Trump admin “assists” Iran’s terror proxies! Clear as a bell.

TO wit, is there any other asset more intrinsic to a positive outcome for a nation’s long-range security, other than having a statesman at the helm – be it this one or that one?

NOT only that, the knock-on effects from the above (and so much more) is a total betrayal of the Kurds; as their people have, for the most part, embraced democratic values and fought ISIS to the death – only to have their nascent state and its resources handed over to Iran’s proxy forces!! Egregiously, it is the Kurds who truly meet the legally prescribed criterias and benchmarks for statehood – unlike the so-called “Palestinians!” But there’s more….

AS previously detailed (Oct. 23, 2017) within Iran’s Genocidal Mullahs Trump Trump; Blowhard Netanyahu Too, Iran’s encirclement of Israel is now complete. Know that Trump’s security team surely realized that this would be a fait accompli.

OF course, McMaster & Co. despise the Jewish state – all hogwash notwithstanding. Even so, pressing questions remain.

When it comes to national security in general, and Islamic jihad in particular, Trump’s swamp emits a CLEAR and present danger.

In this regard, much of the evidence can be found below. Islam’s cesspool alike.

Indeed, his administration has more security leaks and holes than a sinking ship. That many. Resultant, in light of the surrounding chaos within Trump’s inner circle, isn’t a look-back warranted, one which warned of the above duo’s allergic views re Islam + terror? Mind you, don’t be fooled by the multi-culti halo placed upon Dina (Habib) Powell’s head, via Dems and RINO’s alike. Yes, she is the RINO machine’s Huma Abedin, and in more ways than one. Not only that, she is a close friend of HUSSEIN’s hatchet woman, Valerie Jarrett! Go figure. But never mind. Let’s hear it for ‘girl power’, non-patriotism (that’s putting it mildly) be damned…..continue reading….

Is it a shock – or not – that the very same H.R. McMaster called 9/11/01 (incontestably, the gravest ISLAMIC terror attack on U.S. soil) a “mass murder attack“, while headlining last week’s marking of the 70th anniversary of the National Security Council? In one fell swoop, thus, he eviscerated, expunged, and extricated Islamic terrorism as the KEY element and basis for the horrors of 9/11/01!! How dare he. Reprobate. Immoral pygmy – and these are the kindest words to attribute to his dastardly words and concomitant actions….

MOST significantly, in the main, Trump is way out of his (geo-strategic) depth – apparently, incapable of ridding the Deep State swamp from his midst. Inextricably, they are leading him astray.

ON the other hand, Netanyahu recognizes what’s what. No doubt, he is more than well-versed in the centuries-long Sunni/Shia battle for hegemonic rule, as well as their ability to volte face when cooperative efforts come into play – destroying Israel and America are two core collaborative interests. Still yet, above all else, “Bibi” follows Washington’s lead and awaits its stamp of approval – like a slave to its master. Regardless, the main onus lies atop his leadership – or lack thereof – when it comes to protecting Israel’s security.

IN other words, at a time when every Mid East tyrant is ignoring Trump’s “threats” (recognizing, America is little more than a paper tiger throughout the region and elsewhere alike), why in heaven’s name is Netanyahu terrified to part company with an administration which is little more than “Obama Part Two” within Mid East foreign policy – Trump’s professed affinity for Israel, beside the point? Alas, for all practical purposes, appearances of friendship are worth less than a hill of beans – if not backed up by practical application! Agreed?

MORE specifically, as the highly dangerous “peace”‘ farce carries on via Kushner & Co. – most recently, at the end of October, in tête-à-têtes with the Saudis – those who are familiar with this fiery arena internalize that what is taking place under Trump’s tenure is reason enough for HUSSEIN to smile and crow about. Absolutely. For instead of burying the “process”, guess what – “Obama Redux” continues apace! How can this be?

AFTER all, when Trump can’t bear to rip apart “the process”, well, the urgent queries become: truly, has Trump gone mad? Adding more fuel to the fire, when the PA terror junta actually unifies with the Brotherhood Mafia’s Gazan arm, Hamas, is that not enough of a reason to tear apart the dangerous “process” – once and for all? Critically, isn’t the collaboration between two death machines prima facie evidence of ill intent, aside from countless other proofs of the same?

CONCLUSIVELY, The House of Bribes clearly proves how America got from there to here – vis-a-vis the catastrophic knock-on effects associated with empowering and enriching Iran’s genocidal regime, as they take over the Middle East and beyond.

INESTIMABLY, while the above was considered business as usual under HUSSEIN & Co., why has Trump allowed his surrogates to go down the same dangerous course – which spells nothing but disaster for America (in the long-term and short-term), let alone Israel, it’s so-called partner, as well as most dependable ally in the region?

AS to Netanyahu’s lock-step alliance, well, its basis can be found here. 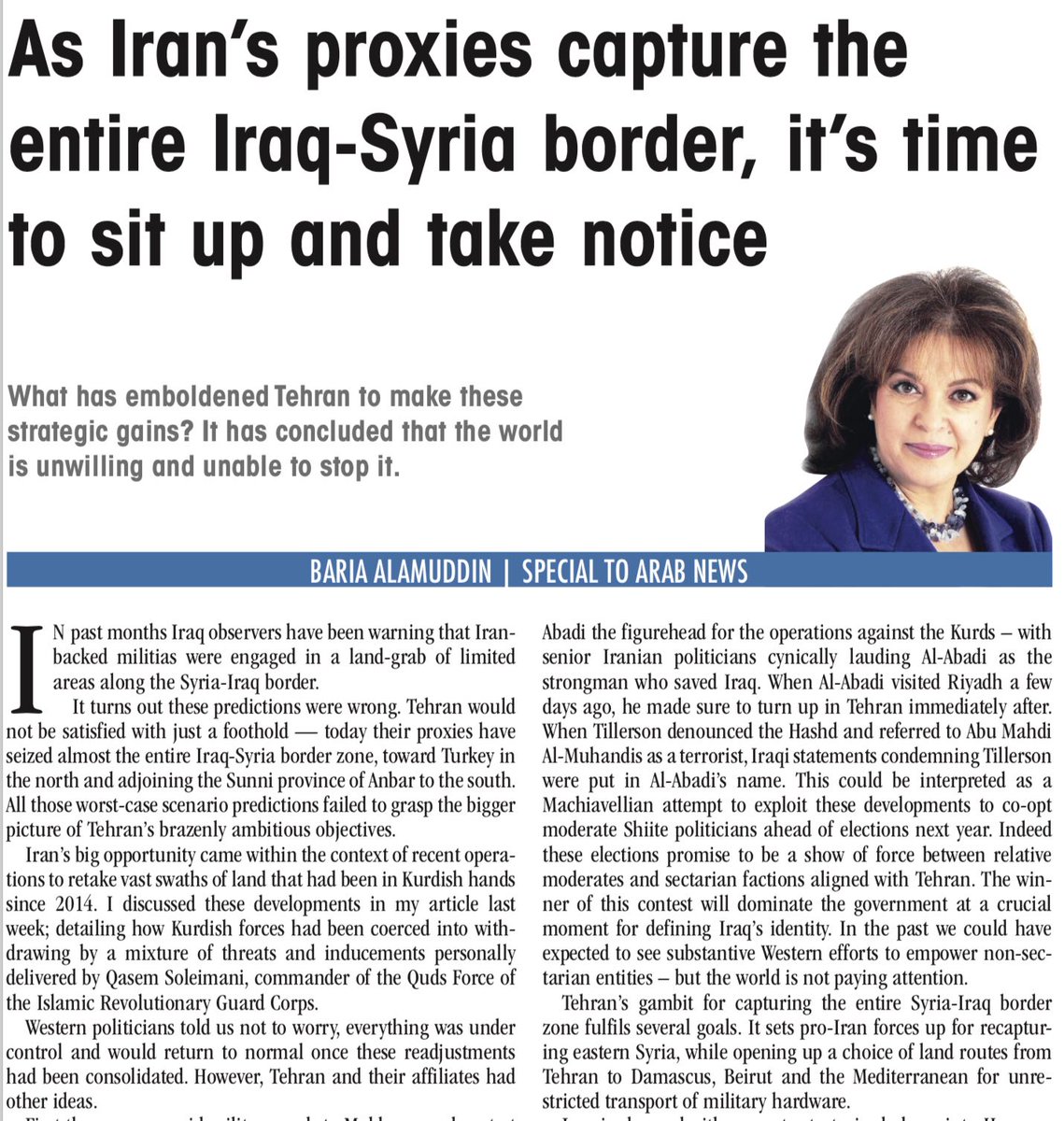 UPDATE: Israeli leaders, who declare tirelessly that Iran and its proxies will not be permitted to deepen their military grip on Syria, made no effort to thwart this achievement and have yet to respond.Our military sources note that the Abu Kamal victory has placed the Hizballah terrorist organization’s feet on the Syrian-Iraqi border in the east as well as the Syrian-Lebanese border running through the Qalamun range in the west. (see map.) Hizballah now acts as doorkeeper on two of Syria’s borders.
The attached map also depicts how Iran and its Hizballah and Iraqi militias now stand foursquare along the central segment of the Syrian-Iraqi border. 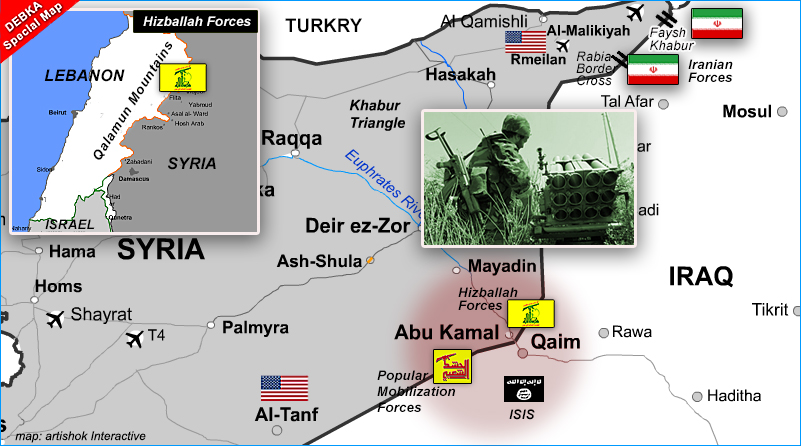