AS is known, the company one keeps is reflective of one’s leanings. Worldview. So much so, those who serve as the POTUS’s chief advisors and surrogates must be deemed symbiotic of said values. After all, the leader of the free world can choose from a limitless pool of world-class candidates and resources, therefore, no excuses are acceptable re this and that “bad apple.”

DEMONSTRABLY, HUSSEIN’s “whisperer” aka alter-ego, Valerie Jarrett; his (il)legal hatchet man, Eric Holder, and his anti-security advisor, Susan Rice (and so on and so forth), mirrored his anti-American worldview. No doubt.

THAT being established, when it comes to President Trump, the above is not as clear-cut. As repeatedly evidenced, his stated positions are often at odds with his actual follow through. Stipulated, he leans rightward on certain issues. More specifically, his recent statement, ‘life begins at conception’, attests to his outlook. In tandem, he nominated a staunch conservative, Justice Neil Gorsuch, to sit on the Supreme Court. This is no small matter. Yippee too.

EVEN so, when it comes to national security in general, and Islamic jihad in particular, Trump’s swamp emits a CLEAR and present danger.

IN this regard, much of the evidence can be found below. Islam’s cesspool alike. 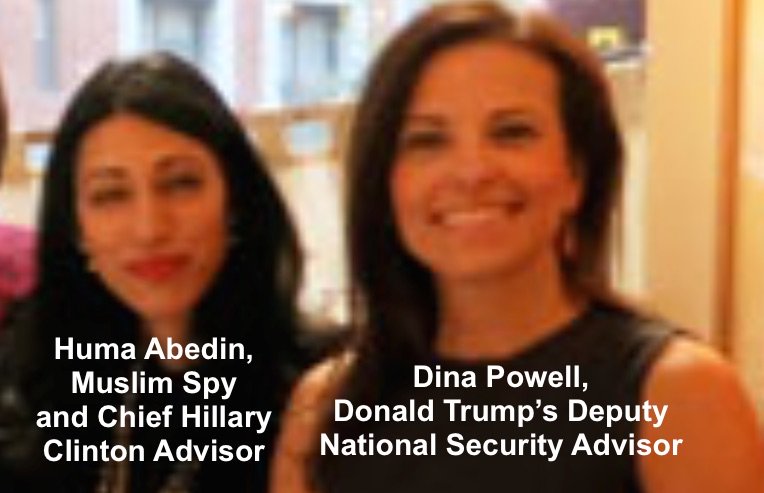 Indeed, his administration has more security leaks and holes than a sinking ship. That many. Resultant, in light of the surrounding chaos within Trump’s inner circle, isn’t a look-back warranted, one which warned of the above duo’s allergic views re Islam + terror? Mind you, don’t be fooled by the multi-culti halo placed upon Dina (Habib) Powell’s head, via Dems and RINO’s alike. Yes, she is the RINO machine’s Huma Abedin, and in more ways than one. Not only that, she is a close friend of HUSSEIN’s hatchet woman, Valerie Jarrett! Go figure. But never mind. Let’s hear it for ‘girl power’, non-patriotism (that’s putting it mildly) be damned…..continue reading….

RESULTANT, is it a shock – or not – that the very same H.R. McMaster called 9/11/01 (incontestably, the gravest ISLAMIC terror attack on U.S. soil) a “mass murder attack“, while headlining last week’s marking of the 70th anniversary of the National Security Council? In one fell swoop, thus, he eviscerated, expunged, and extricated Islamic terrorism as the KEY element and basis for the horrors of 9/11/01!! How dare he. Reprobate. Immoral pygmy – and these are the kindest words to attribute to his dastardly words and concomitant actions!

McMaster made the comments during a Tuesday event at the Center for Strategic and International Studies (CSIS) marking the 70th anniversary of the National Security Council (NSC).

He was addressing the expansion of the NSC from about fifty members in the 1960s, when it was run by Henry Kissinger, another CSIS speaker, to its current size of more than 360 employees.

“What has contributed to the growth over time, as well, from 50 or so to 167 is the emphasis on homeland security, especially after the mass murder attacks on our country on September 11, 2001,” McMaster stated.

McMaster was referring to about 167 policy workers at the NSC, which he explained employs about 360 people.

“We have made a conscious effort to reduce the size of the staff and to make sure that form follows function. As we devolve responsibilities back to departments and agencies, as we get out of, really, management of tactical issues, then we are able to reduce. So we have reduced significantly the numbers of policy people and overall staff. It was over four hundred or so at its peak. We are down to about 360-something now. That sounds like a lot. Of those 360, it’s really about 160 to 170 policy people.”

McMaster’s comments follow speeches given by numerous other Trump administration officials last month on the sixteenth anniversary of the September 11, 2001, attacks in which many of those officials, including President Donald Trump himself, did not once mention the terms “radical Islam” or “Islamic terrorism.”

As Breitbart News reported at the time, instead of naming the enemy, Trump seemingly went out of his way to use other descriptors in his 9/11 anniversary speech, including “terrorists who attacked us,” “barbaric forces of evil and destruction,” “horrible, horrible enemies,” “enemies of all civilized people,” and “enemies like we’ve never seen before.”

Those phrases were also not mentioned in speeches that day by other Trump administration senior officials, including Vice President Mike Pence, Defense Secretary James Mattis, and Attorney General Jeff Sessions.

Pence, speaking at the Flight 93 National Memorial in Shanksville, Pennsylvania, referred to the scourge as “evil terrorists” and “global terrorism.” Pence did mention “the barbarians known as ISIS,” calling the global jihadist group by its acronym instead of the Islamic State.

Mattis, addressing the same Pentagon memorial as Trump, outwardly minimized the Islamic motivations of the terrorists by calling them “maniacs disguised in false religious garb.” He referred to “attackers perpetrating murder” on that fateful day, not even using the words “terrorist” or “terrorism.”

Sessions perhaps came closest to prescribing a religious ideology, calling out “extremists” who “seek to impose their speech codes, their religion, their theocracy.”

“For these extremists, it’s more than religion; it’s ideology,” he stated. “We have no choice but to defend against it.”

But Sessions did not mention a specific religion and did not expound upon which ideology the terrorists maintain.

In February, CNN cited a source inside a National Security Council meeting quoting McMaster as saying that use of the phrase “radical Islamic terrorism” is unhelpful in working with allies to fight terrorism.

In May, McMaster spoke on ABC’s This Week about whether Trump would use the phrase “radical Islamic terrorism” in a speech that the president was about to give in Saudi Arabia. “The president will call it whatever he wants to call it,” McMaster said. “But I think it’s important that, whatever we call it, we recognize that [extremists] are not religious people. And, in fact, these enemies of all civilizations, what they want to do is to cloak their criminal behavior under this false idea of some kind of religious war.”

Breitbart News unearthed a 2014 speech about the Middle East in which McMaster claimed that Islamic terrorist organizations are “really un-Islamic” and are “really irreligious organizations” who cloak themselves in the “false legitimacy of Islam.”

Delivering the keynote address at last April’s Norwich University ROTC Centennial Symposium, McMaster criticized “modern-day barbarians like Daesh and al-Qaeda who cynically use a perverted interpretation of religion to perpetuate ignorance, incite hatred, and commit the most heinous crimes against innocents.”

Breitbart News also reported that McMaster endorsed and touted a book that frames jihad as a largely peaceful “means to struggle or exert effort,” such as waking up early in the morning to recite prayers. It argues that groups like al-Qaeda and other terrorist organizations have hijacked the concept of jihad to wage warfare using such tactics as suicide bombings.

That same book calls Hamas an “Islamist political group” while failing to categorize the deadly organization as a terrorist group and refers to al-Qaeda attacks and anti-Israel terrorism as “resistance.”

MIND you, “Mad Dog” Mattis has been called out by this site for what he is too – another Islamic apologist! Indeed, “Why Did Mattis Nominate Anne Patterson, A Muslim Brotherhood Sympathizer?” sets the stage. Patriots, are you sensing a deceptive and deadly pattern within Trump Inc.?

INTRINSICALLY, is it even remotely acceptable for the head of the NSC to address his charges (never mind all of his Allah-washing to the general public) in such a deceitful manner, that which lends cover to Allah’s Muslim Terrorists? Or, is McMaster in sync with the lies offered up by Islamists and their leftist comrades, whose aim is to destroy the Constitutional fabric of the nation?

EXTRAPOLATING further, one can rightly assess that purging Islam from Islamic terror, especially, while discussing 9/11/01, amounts to an added desecration atop the horrors already perpetrated on the homeland.

BUT if all of the above (and so much more) is not the G-d’s honest truth, wherein lies the difference between McMaster (and other appointees) and the enemies inside and outside the nation? This question is hardly a matter of semantics.

CONCLUSIVELY, when this site identified (at the onset of Trump’s appointment) McMaster & Co. as dangerous obstacles to the security of the U.S. in specific, and the west in general, it was more than a relief that others (several months later) piggybacked as to the same.

NOT only that, why would the head of the National Security Council PURGE staffers akin to Richard Higgins, Derek Harvey, and Ezra Watnick-Cohen – for the “crime” of identifying (for example, via an explosive memo) the Muslim Brotherhood Mafia as a national security threat, in tandem, coupling their nexus to the fascist-left aka the red-green axis, no less? Still yet, why would McMaster retain staffers with Deep State allegiances?

TO be generous, let’s suppose that Trump handed McMaster the reins without proper due diligence. Regardless, despite such negligence, he can no longer claim to be in the dark. Indubitably, McMaster’s statement to the National Defense University:“The Islamic State Is Not Islamic” should have been Trump’s last straw, thus, intoning: “You’re fired!” Agreed?

TO wit, is there any question, even an iota, that McMaster MUST be booted (with others to follow), and that Trump is obligated to explain (to the millions who entrusted him) why he has allowed the enemy within to stay on and endanger the nation?

PATRIOTS, NOTHING LESS SHOULD BE ACCEPTABLE!! YES, THE BUCK STOPS AT TRUMP’S DOOR.

MOST significantly, isn’t it obvious that McMaster is staging a coup against Trump, yet, the so-called “tough guy” stands mute? What the hell is going on?

AS much as acts of frontal jihad – ala bloodied bodies – present a clear and present danger, what is less obvious is the informational stealth aspect, that which McMaster and Islamic apologists control via purges. In other words, the narrative is then set according to political mandates, as well as through surrogates in the media and other aligned apparatuses. A done deal.

EFFECTIVELY, as long as the inherent, unvarnished truth about the violent nature of Islam via Sharia Law is kept out of the public domain (or, at the very least, Allah-washed), creep-by-creep, Islam will continue to sink its teeth into America unopposed.

THINK about what all of the above portends, that is, if Trump’s base does not demand corrective action – forthwith!