HISTORICALLY speaking, when a nation’s fissures are such that they become unbridgeable and untenable, well, there are severe consequences. More often than not, one such outcome has led to internal revolution, as it should. After all, if left unattended – like festering boils – semi-major domestic rifts only worsen into full-blown fault lines. And those with even a smidgen of moral and intellectual integrity understand as much. Think of said analogy as a long overdue (national) house cleaning. Hmm.

NOW, said chasms are generally a direct result of severe economic conditions or exacerbated by them. Nevertheless, other pressure points can be the main catalyst which tip the scale. Either way, when a clear division develops between the (heretofore) national consensus, citizens are forced to choose sides, that is, if they haven’t done so already.

SUCH is the case within “Obama’s Amerika”, and amply demonstrated within many commentaries. However, as destructive as HUSSEIN Obama’s economic swathe has been (and continues to be), the transformation of the nation via illegal immigration and Islamic hijrah ala infiltration and penetration has become a distinctive rallying cry. Tipping point. Even more so, most with functioning brain cells understand that what is taking place all over Europe is a direct result of the so-called “refugee” onslaught. Yes, they realize it will be America’s fate too. Absolutely.

STILL yet, for those who prefer visual aids, take a peek…after peek…

IN this regard, consider the following black incitement – akin to domestic terror – as a force multiplier to said “awakening” from the aforementioned Islamic dangers. Afterwards, we will segue to HUSSEIN Obama’s Chicago ‘hood. Patience, dear readers.

Twenty years ago, an estimated half-million black men gathered in Washington, D.C., at the Million Man March to protest what they perceived as social and economic inequality in America.

In his two-hour speech at the historic event, Nation of Islam leader Louis Farrakhan made headlines when he called for black empowerment and declared, “The [Great] Seal and the Constitution reflect the thinking of the Founding Fathers, that this was to be a nation by white people and for white people. Native Americans, blacks, and all other non-white people were to be the burden bearers for the real citizens of this nation.”

Two decades later, Farrakhan was back at the National Mall – this time hosting the 20th anniversary of the Million Man March, with its chilling “Justice or Else” theme, on Oct. 10 in Washington, D.C.

So have the lives of black Americans improved since Farrakhan’s first Million Man March in 1995?

Rev. Jesse Lee Peterson, founder of the Los Angeles-based Brotherhood Organization of a New Destiny, or BOND, and an exclusive WND columnist, took to the streets of South Central Los Angeles to ask black Americans that very question.

“There are so many people that are struggling financially on the lower end, I’m not sure we can say definitely that it’s made a grand improvement,” said one man.

“We have a black president, so, I mean, that’s a big change,” said a woman.

“You think that’s a result of the march?” Peterson asked her.

“It could possibly be,” she replied

An elderly gentleman and another man in his twenties both said they don’t believe the situation has improved.

“It’s worse,” said another women, “just to keep seeing all this mess that’s going around – shooting up folks.”

Then Peterson asked: “Farrakhan called for 10,000 black men to stalk and kill police and white people. How do you feel about this?”

As WND reported, Farrakhan preached directly from the Quran before a packed Baptist church in August, and he told his adoring audience that violent retaliation is the only way for American blacks to “rise up” and overthrow their oppressors. Farrakhan made the comments at Mt. Zion Baptist Church in Miami, where he referred to a “400-year-old enemy,” which most took to mean white people.

“I’m looking for ten thousand in the midst of the million. Ten thousand men who say, ‘Death is sweeter than continued life under tyranny,'” Farrakhan told the congregants.

He then launched into a poetic tirade against whites backed up with Quranic verse.

“Death is sweeter than to continue to live and bury our children, while white folks give the killer hamburgers.

“The Quran teaches persecution is worse than slaughter. Then it says, ‘Retaliation is prescribed in matters of the slain.’ Retaliation is a prescription from God, to calm the breast of those whose children have been slain.

“So if the federal government will not intercede in our affairs, then we must rise up and kill those who kill us. Stalk them and kill them and let them feel the pain of death that we are feeling.”

The crowd responded with a standing ovation as the 82-year-old Muslim preacher bathed in the moment….continue reading….

SO when this site attests that facts on the ground are conducive to the seedlings of a revolution, there is much supportive evidence (historical parallels) to back up said claim. In fact, a stand alone and exhaustive exposé is necessary to render this topic justice.

ALAS, isn’t it poetic justice that rumblings of major discontent are springing forth through Chicago-land, as “anti-Muslim” discontent attests:

“We want you out,” say the anti-Muslim flyers being circulated to Muslim families in Chicago

Well, well, looks like more Americans finally are rejecting all the pro-Islam propaganda put out by designated terrorist group CAIR and all their media useful idiots. No surprise, CAIR’s spokes man jihadist Ahmed Rehab blames rising anti-Muslim hatred on Donald Trump and Ben Carson. Also, notice how they could only find one fat old leftist hag to condemn the flyers.

MORE specifically, this is the same city which nurtured a hyper-dangerous communist infestation straight into the heart of the White House.

From Marx and Engels, to Herbert Marcuse and Wilhelm Reich, to Betty Friedan and Kate Millett, to Bill Ayers and Bernardine Dohrn, our comrades on the far left have bequeathed a legacy of noxious ideas on marriage and family. Their political-cultural wreckage is being felt today more than ever. In many ways, it has come to full fruition only now in a culture that gleefully redefines marriage and gives us the likes of Barack Obama and Valerie Jarrett in the White House, a damaging political marriage if there ever was one. For seven years now at their home-base at 1600 Pennsylvania Avenue, Obama and Jarrett have been politically and ideologically inseparable. Their White House wedding has fundamentally transformed the country.

Sure, Barack’s matrimonial vow might be to Michelle, but his ideological soul mate has long been Valerie Jarrett. And both Barack and Valerie hail from a truly remarkable line of mentors and family members with deep fidelity to the American Communist Party.

Those political blood lines are so stunning, so bizarre, especially when they intersect across the generations, that people often react dismissively when presented with the information. I’ve laid out the linkages probably more than anyone, mainly in a book on Obama’s mentor, Frank Marshall Davis, who was a hardcore member of Communist Party USA (card no. 47544) and in several major articles on Valerie Jarrett for The American Spectator, the first one running about 5,000 words and appearing in the July/August 2011 print edition.

Again, the common lines are just incredible—but they are real. And the connections get even more jaw-dropping when you toss in mentors for a third leg of the political trinity responsible for two presidential terms of Barack Obama, one David Axelrod. Axelrod was also influenced by comrades with fond commitments to Communist Party circles, and specifically in rotten, politically misbegotten Chicago…continue reading…

RESULTANT, isn’t it expected that a nation which lacks (general) consensus, that which supports its basic underpinnings – its Judeo-Christian ethos and capitalist way forward (no pun intended) – is ripe for shattering? Agreed?

CONSEQUENTIALLY, isn’t it clear why patriots are finally “up in arms?” As indicated, “US patriots are in an uproar, Islam’s encroachment is in the cross hairs.”

IN fact, the real open questions are: Which side will win the upcoming revolution, even if not termed as such? Will it be patriots who are many million strong, or will anti-American destroyers, inside and outside the People’s House, prevail?

BUT as always – and not to be lost in the discussion – CAIR, the Brotherhood Mafia’s propaganda arm, is fired up! So, what else is new….

(Anti-Islam rally in front of a mosque in Phoenix, Arizona, one of a growing list.) 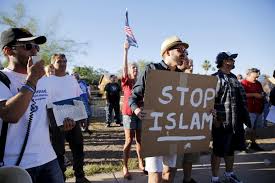 7 thoughts on “HUSSEIN Obama’s Chicago ‘Hood Receives Backlash/Message:Islam’s Followers, Get The Heck Out! A Smoldering Revolt Across America. Commentary By Adina Kutnicki”