TIME and again, Obama Inc.’s mouthpieces either outright lie or jive-talk their way out of what is, by all rational standards, reality on the ground.  Intrinsically, the Islamist-in-Chief would have us believe that jihad has zilch to do with Islam, akin to whores not really being prostitutes. Sheesh.

It has been a long time coming, but the Obama Administration (as of Oct. 2011) has now officially banned the truth. Deputy U.S. Attorney General James Cole declared Wednesday at a conference in Washington that he had “recently directed all components of the Department of Justice to re-evaluate their training efforts in a range of areas, from community outreach to national security.” This “reevaluation” will remove all references to Islam in connection with any examination of Islamic jihad terror activity. The Obama Administration has now placed off-limits any investigation of the beliefs, motives and goals of jihad terrorists….continue reading….

NOT only that, he Allah-washed ISIL (equally revealing is his appendage of choice for ISIS, but let’s not digress) as little more than a JV ‘nuisance’, opining, that its monstrous barbarism has nothing to do with Islam, nor is it attached to its al-Qaeda roots. Never mind that ISIL/ISIS…whatever…is an actual spin-off from al-Qaeda in the Arabian Peninsula, you know, that branch which HUSSEIN Obama apparently beat back when Osama (reportedly) ended up swimming with the fishes. Oh, dear…his lies keep growing….spinning….feel a headache coming on…

IT gets worse. Didn’t you know that the global Muslim Brotherhood, aka the Brotherhood Mafia, is ‘moderate’ too, at least, according to the Liar-in-Chief? But let’s just ignore the fact that it is the main Islamic umbrella under which all the hydras operate from, including ISIL/ISIS!

SO it is against said distorted and Orwellian backdrop that DHS’s lies enter the picture, as Jeh Johnson, its Director, endangers the nation F/B/O of Islamic jihad. Yes, he does. 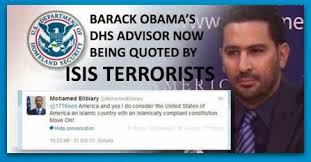 POINTEDLY, this is how Islamic terrorists (be they ISIL/ISIS, Hezbollah or other Brotherhood Mafia offshoots) penetrated America, and it was accomplished through DHS’s open sesame borders alongside Mexico.

INDEED, this investigative journalist has proven that DHS is responsible for said infiltration and penetration, and that Mexico is key.

CONSIDER the following, as one exhibit out of a lengthy list:

MOST ominously, a road map to their Mexican base – and how it came to pass – has been detailed at this site. Indeed, “ISIS is making preparations to strike U.S. southern border states” was written in Aug. 2014.

AMERICA’s compromised borders are not the result of an operational inability to control infiltrators, whether under the guise of kiddies or not. The absence of proper controls were designed to aid and abet the overthrow of America, both through an unbearable crush of illegal aliens, further coupled with an ability to ferry Islamic terrorists for whatever havoc they have in store. Sounds bizarre, yes, but not from an Anti-American-in-Chief’s perspective.

MOVING right along…the poisonous fruits of HUSSEIN Obama’s labors are prepping to explode. As indicated, a two-prong probing is in place; within America and poised inside Juarez, Mexico.

IN fact, as a main hub for narco-terror (alongside the tri-border region of Latin America),MS-13 became a front center concern at this blog. This site is anything but Johnny-Come-Lately….continue reading…

IN this regard, lo and behold, a TOP law enforcement official has finally admitted that Islamic jihadists have infiltrated through Mexico! What took them so long? Well, let’s take a stab at it: Could it be that operational plans are so far along…hmm…it is impossible to pretend that what is isn’t??

A few days ago a top law enforcement official finally confirmed that Islamic terrorists have infiltrated the United States through Mexico, a story that Judicial Watch broke last year as part of an ongoing series involving the dangerously porous southern border.

Last October JW reported that four members of the militant group Islamic State of Iraq and Greater Syria (ISIS), who entered the U.S. through the Mexican border, were arrested in McAllen and Pharr Texas. Then, over the summer, JW reported that Mexican drug cartels are smuggling foreigners from countries with terrorist links into a small Texas rural town near El Paso and they’re using remote farm roads—rather than interstates—to elude the Border Patrol and other law enforcement barriers. The information comes from sources on both sides of the Mexico-U.S. border who say the Special Interest Aliens (SIA) are being transported to stash areas in Acala, a rural crossroads located around 54 miles from El Paso on a state road – Highway 20.

Prior to that JW published a series of investigative articles citing high-level federal law enforcement, intelligence and other sources certifying that Islamic terrorist groups are operating in at least two Mexican border towns. In August, 2014 ISIS planned to attack the U.S. with car bombs or other vehicle borne improvised explosive devices (VBIED) from a camp in the Mexican border city of Ciudad Juarez. Agents across a number of Homeland Security, Justice and Defense agencies were all placed on alert and instructed to aggressively work all possible leads and sources concerning the terrorist threat.

This past spring JW sources that include a Mexican Army field grade officer and a Mexican Federal Police inspector disclosed that ISIS is actually operating a camp just a few miles from El Paso. The exact location where the terrorist group has established its base is around eight miles from the U.S. border in an area known as “Anapra” situated just west of Ciudad Juárez in the Mexican state of Chihuahua. Another ISIS cell to the west of Ciudad Juárez, in Puerto Palomas, targets the New Mexico towns of Columbus and Deming for easy access to the United States, the same knowledgeable sources told JW.

For the most part, government officials have refused to go on the record about these serious terrorist threats and in fact many have outright denied they exist or have tried silencing sources. For instance, a congressman (Beto O’Rourke) who represents El Paso in the U.S. House of Representatives telephoned area offices of the Federal Bureau of Investigation (FBI), Homeland Security Investigations (HSI) and the U.S. Border Patrol (USBP) in an effort to identify—and evidently intimidate—sources that may have been used by JW to break the ISIS in Juarez story.

This makes it refreshing to hear a high-level government official confirm what JW has been reporting for more than a year. During a visit to Laredo a few days ago the Director of the Texas Department of Public Safety (DPS), Steven McCraw, answered a question from a member of the public who asked if any suspected ISIS terrorists had ever been apprehended on the Mexican border. A local news outlet published McCraw’s answer: “Individuals that come across the Texas/Mexican border from countries with a known terrorism presence and the answer to that is yes. We have individuals that we’ve needed to debrief in Pashto/Dari. Not a lot of Pashto and Dari speakers around. But you can’t think about the last attack; you have to think of the next attack and where our vulnerabilities are. So, we’re concerned about that.” Before becoming DPS director in 2009 McCraw was an FBI special agent in several large U.S. cities as well as a DPS narcotics agent and a Texas state trooper.

AS if the aforementioned treachery from HUSSEIN Obama’s regime is not enough, piggybacking their support for Islamic infiltrators, they are lending ‘legal’ cover for upwards of 100,000 ‘refugees’ to destabilize the nation. This too is a fact.

IN this regard, patriots can now assess some of the actual damage, that which will DIRECTLY impinge upon (at least) 180 US cities!

NEVERTHELESS, as always, if one peers hard enough, one can find a silver lining. Yes, this time is no exception. To wit, a few states are starting to exert their rights, as such, they are beating back against Obama Inc.’s out of control Federal overreach. Dare one ask: What took them so long??

IN any case, Arizona’s legislature is in FULL and OPEN rebellion, and THAT’S a welcome relief:

Barack Obama is not afraid to wield executive power to accomplish his agenda.  Whether he is ordering immigration officials to ignore deportation laws or mandating certain crimes not be prosecuted, Obama loves to run America by his own rules.

But one state just came up with a surprising plan to stop Obama’s end-run around democracy. This state’s move could prove to be first among many states rejecting Obama’s overreaching.

This week, Arizona passed two bills to stop Obama dead in his tracks.

The first bill, Arizona House Bill 2368, introduced by Rep. Bob Thorpe (R-Flagstaff), prevents the state of Arizona from funding any executive orders issued by President Obama, or policy directives issued by the Department of Justice.

The Arizona State Legislature website described the bill as prohibiting “this state or any of its political subdivisions from using any personnel or financial resources to enforce, administer or cooperate with an executive order issued by the President of the U.S. that has not been affirmed by a vote of Congress and signed into law as prescribed by the U.S. Constitution.”

NOW, even though a few states are enacting some stop-gap measures to stanch the national bleeding, the fact remains that without a full and open rebellion against an Executive Branch which rivals any third world totalitarian regime, well, there will be little left to rebel against.

INTRINSICALLY, states’ rights, if not held dear, will disappear under the boot of Obama Inc., likewise, under any similarly-bent successor regime. Indubitably, this is precisely what HUSSEIN Obama and surrogates – in the forefront, DHS’s Jeh Johnson and DOJ’s Loretta Lynch – are counting on.

IS it too little, too late? Time will (soon) tell.