IN today’s upside down world, many Americans (westerners at large) are painfully slow to catch up to speed. Chop-chop. Yalla…יאללה, as we say in Israeli slang, hurry up, move your rear in gear! You get the drift. And, this is not just a “Type-A” personality being impatient with slow pokers, even though they can (under certain pressing circumstances) otherwise drive this investigative journalist nuts.

YES, too many Americans believe, mistakenly, that their ingrained standard, to “live and let live”, is embraced across the board. Lethal error.

NOT only that, their failure to internalize the absolute jihadi role played by mosques within the Muslim community will lead to America’s (west’s) national and cultural suicide. Clueless, they are in the dark, as to what animates followers of Islam, and from A-Z. Again, grievous miscalculation.

IRAQI Shiite cleric Ayad Jamal al-Din, a former member of the Iraqi parliament says that there are thousands of Mosques in America preparing people to join Islamic State.

AND this investigative journalist has REPEATEDLY warned about the explosive underpinnings of mosques in America. Not only that, said “audacity” has enraged countless Islamic jihadists and their apologists, thus, the bugaboo of“Islamophobe” has been brandished too many times to count. Threats alike.

BE that as it may, sans any poppycock, they are Islam’s “barracks within“, and some Islamists have admitted as much. On the other hand, Americans are fed to believe that they are merely houses of worship akin to churches and synagogues. Yada, yada…meanwhile, they hide behind freedom of religion to plot their slaughter under the banner of (pagan) Allah….continue reading…

ON the other hand, those who were forced to flee their home countries due to severe persecution, they understand what it means to ever allow Muslims to gain a tighter foothold within any community, let alone a western one.  In other words, who but Mizrachi Jews…מזרחים…salt of the earth type of folks, having fled for their lives from Muslim persecution and onslaught from the 1940’s to the early 1970’s , know what is at stake, aside from Christians in the Middle East and Africa alike? Indeed, the slaughter and enslavement by Islam’s barbarians place the dangers in a realistic perspective, as opposed to pie-in-the-sky dreaming associated with too many westerners. Resolutely, they can enlighten their American (western) neighbors as to what lies in store for them, if they fail to act. Post haste.

REGARDLESS, as Luttrell amply points out, ignore HUSSEIN Obama…his surrogates…step over them, and everyone else who opines the same lying mantra. However, follow the lead of Iraqi-American Christians, immigrants, mostly Chaldean, a Catholic sub-group within Iraq’s Christian minority. Indeed, they’re a growing, visible presence in the Sterling Heights, Michigan community, approximately 30 minutes from Dearbornistan! Got that?

MUSLIMS SHOCKED as members of the public,especially Iraqi Christians, cheered loudly when the 9-0 vote was announced last evening. More than 200 residents protested the planned mosque last Saturday. Planning Commissioner Jeffrey Norgrove said the proposed mosque is “excessive, not compatible” and that it “violates ordinances.”

The Sterling Heights City Planner recommended that the council deny a special land agreement to build the mosque in a residential area. The mosque developer said his constitutional rights are being violated, but the city said the proposed mosque is too big and doesn’t meet code.

AND, boo hoo to the following Islamic supremacists, all the rest alike. Go to (pagan Moon god Allah’s) hell.

HMM, Chehab would do well to cease blowing smoke, at least in this direction. Inextricably, like night follows day, wherever an “American-Islamic” prefix is appended…an oxymoron to the nth degree…well, the Brotherhood Mafia is NOT far behind. Hence, CAIR to the rescue!

MOREOVER, Chehab should immerse himself – a smart-mouth, who has the gall to hector patriots, including Iraqi-American Christians – in the American definition of “rule of law”, and not twist it into Shariah Law! Incontrovertibly, some of us realize that Islam – and with mosques as their spearhead…their barracks within – is the gravest danger, bar none, to America and its Constitutional “rule of law.” 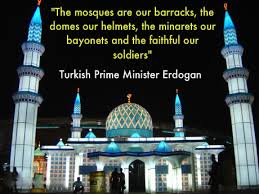 BUT if Jeffie (and others) requires a tutorial, that’s okay. He can avail himself of this site and its well-endowed offerings. Teachings.

BY the bye, the above dangers were duly noted within a recent commentary, Michiganstan, and so on and so forth throughout these pages re cities in America.

NOT only that, the following is illustrative of what is at stake:

The proposal was raised again during the public comment segment at the end of the August 18, 2015 meeting of the Sterling Heights City Council meeting, where more than 25 people spoke against the mosque and only a few said it was disgraceful that with so many Christian Churches, that Muslims could not have a house of worship, too.

One speaker protesting against the mosque told the Sterling City Council board said when he identified himself at the Planning Commission meeting claimed that he was harassed and bullied after speaking out against the Mosque. Several other speakers said they are afraid to identify themselves and give their home addresses because of alleged retaliation.

Mayor Taylor said he would not require speakers to give their home addresses but they have to identify their names.

Speaker after speaker threatened the board members urging them to step in and take over the mosque proposal, although the mayor, Michael Taylor, said that the City Council has no authority over the plan, or face being thrown out of office in the next election. Taylor was appointed mayor to fill the remaining term of former Mayor Richard Notte, who was serving his 11th two-year term as the city’s mayor when he died on October 2014 at age 76 from pancreatic cancer.

One Chaldean speaker denounced the Muslims as “killers” and warned that the Muslims will do to America “what they did in Iraq.”…

PRIMARY LESSON(S) LEARNED: AS is said in Israel, sach ha’kol…סך הכל…at the end of it all, one would be foolish in the extreme to fail to learn ones requisite lessons, that is, if national (and personal) survival is at stake. Trust, it is!

CONSEQUENTIALLY, if patriotic Americans (westerners) have any sense left, they will IMMEDIATELY grasp – akin to a life raft – onto the Sterling Heights template, prioritizing it as Exhibit Number One. Studying it will demonstrate how to effectively beat back against the construction of any new mosques – whatever their size – in a specific neighborhood. Guaranteed, once they gain a choke hold in the community, it is infinitely harder to stop their Islamist designs. Nevertheless, onerous as it seems, part of the (patriotic) lesson plan should include “reverse engineering.” Basically, those which are already standing should be in the cross hairs, and this site has some handy methods at the ready.

MOST significantly, since the aforementioned Michigan neighborhood stands in the thick of an Arab/Muslim influx and inflow, still yet, the mosque was successfully thwarted. Even more so, in communities all across America where the Muslim community is insignificant, isn’t it outrageous that Brotherhood Mafia front groups buy up huge land masses, expecting to zone them for this and that? What are they up to? Rhetorical.

READERS, let’s get down to brass tacks and simply apply some basic mathematical principles of Boolean Algebra, specifically, the Associative Law. Yes, a class that even the mathematically challenged have to navigate, at least those who want a matriculation diploma! “Say whaaat?”

WELL, if rational thinking still has any place left in this upside down world, what could be more operationally LOGICAL (again, apply the logic, hopefully, learned in high school mathematics) than concluding via this very stark principle, hence, coined, “Adina’s America-Saving Operation”: Hampering Islamic footholds + monitoring/lessening mosques = safer America! A + B….