NOT unlike most politicians, Frau Merkel has an acute sense of smell, that is, when it comes to anything which threatens her grip on power. When in jeopardy, her go-to modus operandi involves whatever temporary salve will stanch the (political) bleeding – in the hope that the populist rage will die down. Mea culpa….mea culpa….as if that will squelch their underlying furor!

ON the one hand, she draws upon her Stasi roots to get the job done – whatever it takes. Thug-like, back in 2015, Merkel threatened Eastern European counterparts to accept Islamic “refugees” – or else. In no uncertain terms, if they didn’t fall in line, she dangled the prospect of war over their heads! Once a Stasi agent….

ALAS, on the other end, she kinda….sorta….from time to time….admits that Germany’s “open (Islamic) sesame” is becoming a “problem” – yet, she refuses to execute a volte face. Still, she has to offer fed-up Germans a sop to keep them from exploding with rage.

SO much so, in January 2016, the non-Muslim street hit a boiling point. As a result, this site felt compelled to issue an updated report: “Merkel’s ‘Refugee’ Jihadi Rapists & Germany’s Secret Police Memo Exposed.”

……A wave of sexual assaults in Cologne, Germany, on New Year’s Eve – and the media cover-up that followed – enraged local citizens. The backlash grew as it became apparent that similar attacks happened in Bielefeld, Duesseldorf, Frankfurt, Hamburg and Stuttgart.

Over 100 sexual assaults and robberies were perpetrated by Arabic and North African migrants last Friday in Cologne, but Germany is not alone.

The list of countries that have reported a spike in sexual attacks since taking in migrants include:

“The idea of multicultural Europe has failed,” Robert Fico, the prime minister of Slovakia, said on Friday, the Telegraph reported. “The migrants cannot be integrated; it’s simply impossible.”

Fico said there was a “clear link” between the sex attacks and the influx of refugees to European nations.

Finnish police echoed what their counterparts in Germany said about crime taking on a wholly different dimension with the arrival of refugees.

“There hasn’t been this kind of harassment on previous New Year’s Eves or other occasions for that matter. This is a completely new phenomenon in Helsinki,” Ilkka Koskimaki, the city’s deputy police chief, told AFP. “The suspects were asylum seekers. The three were caught and taken into custody on the spot.”…continue reading…

……A leaked secret report by a senior Cologne police official has revealed that the Muslim invader violence over New Year’s Eve was far more serious than even initially reported—and that it definitely involved “Muslim refugees” who boasted that they had been “invited by Mrs. Merkel” to come to Germany…..continue reading the blasted report here….

…..SO while a mountain of evidence can be found at this site, here…here…here…and elsewhere, even judges in Germany are taking note of her illegal putsch. Germany’s political leaders alike.

“Chancellor Angela Merkel overstepped her constitutional powers by letting over a million refugees into the country, one of Germany’s most senior former judges has said.

“Going it alone was an act of self-empowerment,” Michael Bertrams, who was president of North Rhine-Westphalia’s constitutional court from 1994 to 2013, wrote in the Kölnischer Stadt Anzeiger on Wednesday.

Merkel’s policy of opening Germany’s doors to refugees was “full of empathy but lacking in a plan,” the ex-judge said.

All substantial decisions in a democracy lie in the hands of the people’s chosen representatives, he argues, pointing out that the constitutional court had decided that the parliament has the last word on decisions over whether the German army is sent to war.

“If the military mission in Mali could only go ahead with the permission of the parliament, then it is certainly necessary when we are talking about taking in hundreds of thousands of refugees,” the judge writes.

Bertrams is the second constitutional judge to criticize Merkel’s refugee policy in a matter of days, after Udi Di Fabio announced on Tuesday that Bavaria has a right to take the government to court over its open-door policy. …

The judge said in the report that the government is obliged to secure Germany’s borders and to control the influx of refugees, Die Welt reports”…continue the disaster Merkel imported here….

ADDING fuel to the fire, as always, the establishment media lies through their teeth about everything and anything related to Islam, opining: “it’s a cultural misunderstanding!”

MIND you, even before the massive Islamic hijrah began with her “open (Islamic) sesame” policy, Merkel understood full well that her actions would have irreversible knock-on effects throughout Europe in specific and the west in general.

SO it is quite telling that several years after her devilish handiwork changed the face of Europe for decades to come – possibly, forever – that she FINALLY admits, albeit, kicking and screaming:

This week, Chancellor Angela Merkel finally admitted that the “multicultural Germany” had failed.

Who would have thought that? “Merkel says German multicultural society has failed – BBC News” https://www.bbc.com/news/world-europe-11559451 …

Attempts to build a multicultural society in Germany have “utterly failed“, Chancellor Angela Merkel says, calling on immigrants to learn German to integrate.

OF course, her “sudden awakening” has everything to do with her political future, and nothing – absolutely nothing – to do with the untold disasters she wrecked!

EVEN more so, to understand what’s what’s, the “elephant in the room” must be exposed, that is, Islam. Incontestably, its basis is wholly incompatible with western life and the concomitant values thereof. Simply put, Islam’s underpinning(s), Sharia Law, is a cancerous scourge. And the fact that Islam and blood are inextricably tied, well, that about sums it up.

ALL of which leads straight back to an inescapable and tragic truth, regardless of the discomfit that it provokes: Europe, once the epicenter of western civilization, is in its final death throes!

BUT MAKE NO MISTAKE: whither Europe goes, so too does America, Israel and the west at large. Ask yourselves: is it an accident that Europe’s current descent into the arms of socialists and Islamists – via the red-green alliance – once again, mirrors the symbiotic collaboration between Nazi socialists and their Islamic partners, in the run-up to World War 2? Indeed, history repeats. 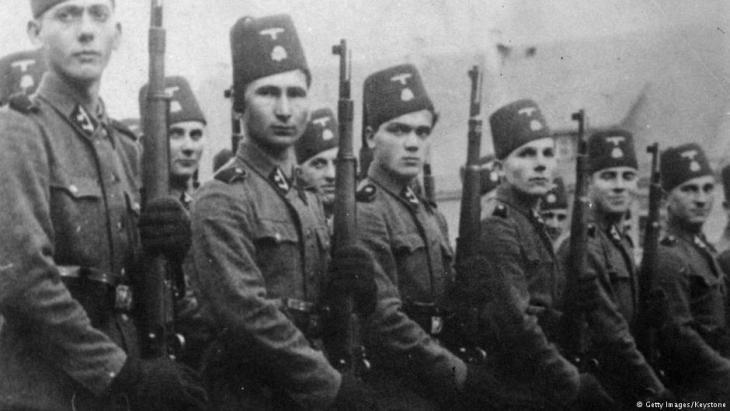 (Hitler′s Muslim stop-gaps – During the Second World War, tens of thousands of Muslims fought on the side of the National Socialists. In interview with Nastassja Shtrauchler, historian David Motadel examines the attitude of Hitler and the Nazis towards Islam and Muslims. Interview by Nastassja Shtrauchler)

AS to America, every thrust gained by Mohammedans into the body politic and civil society is championed by burgeoning socialists within officialdom, the establishment media, academia, cultural, and legal realms. It is this nexus which explains why ISIS praises Reps Omar and Tlaib, as well as socialist upstart AOC!

NOT only that, ask yourselves another head-scratcher: why would (a majority of) American colleges (not just U of Minn) utilize a Nazi authored Arabic-English dictionary for students studying Arabic?? Hint: Nazis loved and admired (and still do) Arab Islamists and vice versa! And the fact that U.S. academia (for many decades) is in the grip of socialists and Arab-Orientalists, well, what happens in Europe, eventually, boomerangs into America – most especially, throughout academia.

TO wit, when history is written (and not the revisionist kind), honest brokers will have little choice but to look back upon the absolute part played by Merkel – in specific, and Europe’s leaders in general – in the death of the west.

IN fact, without a scintilla of a doubt, within a few short decades (if not before), out of the wreckage of the European continent will emerge the most chaotic, repressive, and retrograde system – that which destroyed much of Europe after Hitler stormed through its gates. But the difference this go-around is that the barbarians within have been invited as the “new” Europeans; the multi-culti “guests!”

2 thoughts on “Merkel FINALLY Admits “Multi-Culti” Failure, Yet, Leaves Out “The Elephant In The Room.” What’s The Hidden Element? Commentary By Adina Kutnicki”