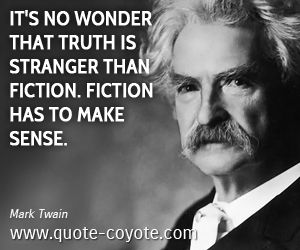 IN one of Mark Twain’s many works, “Following The Equator: A Journey Around The World “, he coined a timeless adage, that is, “truth is stranger than fiction.” By extrapolation, since good fiction writing has to stick to believable possibilities to make sense, as such, to hook the reader, truth possesses no such limitations. After all, it IS what it is!

ALONG this trajectory of clear-eyed thinking, let’s segue from the mental image of yesteryear’s treasured storyteller, to a more contemporary and urban saying: “you can’t make this sh*t up!” Precisely.

TO wit, before we tie in the (newly elected) Islamist poisons ensconced inside the halls of Congress to the Brotherhood Mafia’s hydra (one of which is operating America’s ports), it is imperative to hark back to a related treason, as reported on June 12, 2015: “Clinton, Inc. Sold Out America Via Port of Canaveral To The Brotherhood Mafia: Port Deals & More!”

TRUST, this is a prime example of the red-green alliance, even though they align for a multiplicity of reasons. So, if millions of patriots now know about this treachery, well…..Mind you, there are several addresses that (more than) deserve said backlash. “Resistance.”

NOT only that, three years down the road (2015 to 2018), outright passivity allowed the Brotherhood Mafia to strike again! As always, once they gain a sandal-hold (in this instance, ports and more), they never let go of major entry points – hook, line, and sinker. Dead on.

ALL of which should bring heavy-duty evidence of the same (to be exact, a little over six months ago) to the top of the national terrorism threat level: SEVERE/ RED!

IN this regard, for added heft; for some straight-shooting, and for a full-on education (as to what’s what), the advice within this site is: in order to understand what lies in wait, absorb the following evidentiary trails:

AFTERWARDS, if your head isn’t ready to explode, read below for an encapsulated version.

Gulftainer, the UAE-based port operator, on Wednesday (Sept.19, 2018) said it won a 50-year concession to operate and develop the Wilmington port in Delaware, USA, with a $600 million investment.

Privately-owned Gulftainer currently operates the Canaveral Cargo Terminal in the Port of Canaveral, Florida and provides services to the U.S. armed forces and the U.S. space industry.

The Delaware concession agreement completes a preliminary agreement between Gulftainer and the State of Delaware, as well as the completion of a formal review by the Committee on Foreign Investment in the United States (CFIUS), granting Gulftainer exclusive rights to manage the port.

The Port of Wilmington is a full-service, deepwater port and marine terminal strategically located on 308 acres at the confluence of the Delaware and Christina Rivers.  Delaware’s Port is the first major port on the Delaware River – only 63 miles or 4 hours from the Atlantic Ocean.

Watch this short video to see who Dr. Hamid Jafar is, and understand how insane these deals are to sell a major strategic US port to him.

MOVING onward….from one outrage to another….and another…..

OUTRAGEOUSLY, ominously, despite all of Gulftainer’s terror ties – for heaven’s sake – the Committee On Foreign Investment (AKA CFIU) had NO issue with Gulftainer’s terror roster, yes, and they DO hail from the worst of the worst! HINT: there is enough pay-for-play to squeak the greasy wheel; to look the other way. Be that as it may, one would expect that millions upon millions of Americans beg to differ.

ALL of which is of piece with the fact that there are NO limits to the treachery – that the powers that be (from a multiplicity of agencies, and via both political parties) won’t find unacceptable. Intolerable.

IT is with the above disinfectant in mind that it becomes crystal clear, and manifestly so – as to how Tlaib and Omar, Brotherhood Mafia Muslimas (with socialist revolutionary “AOC” in league), are able to storm and barrel through the halls of Congress. Most especially, after fellow Islamists paved the way through a little known Muslim-American political party – the likes of which reads like a “who’s who” among the top tier of terror-tied front groups – this is the case.

INCONTROVERTIBLY, the following report should serve thusly: as demonstrative, as illustrative, and as “in-your-face” messages to all infidels (AKA kafirs) in America and beyond. Back up(s).

Tlaib spoke during a CAIR meeting in Chicago. Tlaib starting out by speaking in Arabic then switched, “You know, we always said ‘The Muslims are coming!’ Well, guess what? I think we’re here!” Next, Tlaib told a story about an interaction with John Dingell where he says “If you stand still enough on the river banks, you will watch your enemies float by dead.” Tlaib smiled and laughingly revealed how the now-deceased lawmaker’s words about watching her “enemies float by dead” made her feel so much better.

PATRIOTS, could she/they be any clearer?? Ever more revealing, leave it to the intrepid (yes, there are still some Jews who aren’t afraid to stand up and shout the damnable truth) Israel Advocacy Movement (from Britain, of all places) to let it all hang out via one video after another.

Now, the Israel Advocacy Movement has created a stunning video showing the close ties U.S. Congresswoman Rashida Tlaib (D-MI) has with not one, not two, but multiple friends who are supporters and even friends of extreme terrorists.

INDEED, one such close terror tie, Jbara Mwafaq, hails the burning up of Jews as a “blessed” act  – through one of their choice methods of attack, that is, bus bombings in Israel! 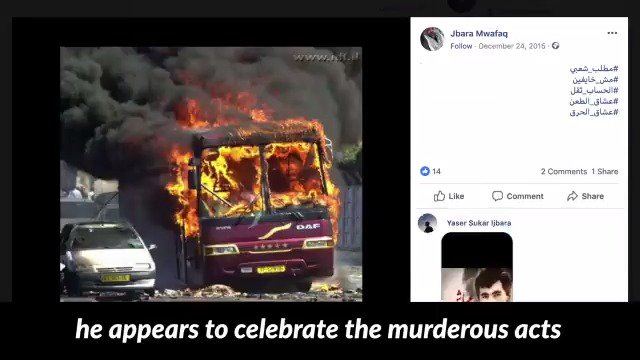 VIDEO: Rep. Omar About 9/11: ‘Some People Did Something’
WHICH brings us straight to Omar, Tlaib’s Muslima-In-Arms, an anti-American(refugee, no less) who requires little introduction to those who have been paying attention. Indubitably, her intent makes her a clear and present danger. In fact, she was outed in (one of) the referenced commentary, Tlaib and Omar, Brotherhood Mafia Muslimas!

MOREOVER, Omar (Tlaib too), an out-and-out Jihadi supporter, is hardly backing down – supremely confident that she has the support of a majority of the Democratic-Socialist arm in Congress and other power centers. Thus, she giggled….https://www.youtube.com/watch?v=cKaovRYkuEs

NOW, is that not enough of a reason to bring her before a special investigative committee, as she brazenly MOCKED the 3,000 plus victims who were incinerated by Islamic Jihadis – and not by “some people who did something” on 9/11/01? At the same time, she OPENLY backed Al-Qaeda and its acts of terrorism!

INEXTRICABLY, what will it take to elicit a clean sweep of the Brotherhood Mafia (and its agents) from America’s power centers and the nation at large? The question becomes: will it take a WMD attack to bring officialdom on board? Perhaps.
PATRIOTS, imagine this very realistic scenario: knowing what you do about the Brotherhood Mafia at large; its agents inside Congress (trust, there are more than you realize….they lie low, so to speak, unlike Omar and Tlaib), and, now, the “port deals”, how likely, how far off, before the signal is given to ship WMD materials  through their wholly owned ports?

EXPLOSIVE VIDEO – ISLAMIC STATE PRAISING ILHAN OMAR, RASHIDA TLAIB & ALEXANDRIA OCASIO- CORTEZ
GUARANTEED, top Brotherhood Mafia leaders from the Middle East will give the order: ready, set, go….blow!! Of course, their main agents are deeply burrowed all across America, as this Jihadi expert repeatedly warned – here, here, here, here, here, etc., as back-benched by this most recent report.
More than 10,000 illegal aliens from countries designated as state sponsors of terrorism are living in the United States, according to federal data.

The countries of origin include Iran, North Korea, Syria and Sudan, said the Immigration Reform Law Institute, or IRLI, which referenced the data in a study reported by Breitbart News.

The illegal aliens either have been ordered deported or have pending deportation orders, despite remaining in the U.S., Breitbart said.

A total of more than 1.7 million illegal aliens remain in the U.S. despite having been ordered deported or having pending deportation orders.

Of the 10,000 from terror-sponsoring countries, about 6,000 are from Iran, Wilcox pointed out.

He noted that California, a “sanctuary” state that shields illegal aliens from federal immigration authorities, has the largest population of Iranians outside of Iran.

“We’ve had hearings here recently in Congress where U.S. intelligence officials have stated there are Iranian sleeper cells inside the United States, ready and waiting for the order,” he said.

The first attack on the World Trade Center, the New York subway bombing conspiracy and the 9/11 were plots perpetrated by immigration violators, said Wilcox.

“We saw on 9/11 the damage that only 19 sleeper cell terrorists could cause,” Wilcox said. “This is just the latest example of the disaster of sanctuary laws, which force ICE agents to operate with one hand tied behind their backs while making our communities inherently more dangerous.”

BY the way, when it comes to “bringing down America“, Sunni (Brotherhood Mafia) Jihadis merge forces with their Shia (Iranian agents/Hezbollah) counterparts – just like they did in 1993, during the first terror attack on the Twin Towers, a dry-run for 9/11/01! Know that Al Qaeda, Sunni Jihadis, received material support from Iran – as they prepped, then fled, into the sheltered arms of Iran and its terrorist masterminds!

INCONTESTABLY, if patriots stand aside, a recipe for disaster awaits. Still yet, to all those who refuse to see the forest from the (smoldering) trees, so be it. But don’t dare say you weren’t warned! 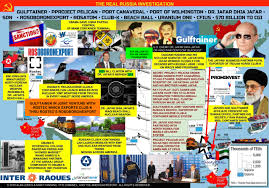 6 thoughts on “The COMPLETE Sell-Out Of America To The Brotherhood Mafia: Seaports + Islamist Reps, Omar & Tlaib, Seal The Deal! Commentary By Adina Kutnicki”