IT has yet to be the case that what starts in Europe stays in Europe. To the contrary. The reality is that it takes very little time for the continent’s poisons to infect America’s shores. Mind you, it is a paradox of historical proportions that yesteryear’s American Patriots within the Thirteen Colonies (in their struggle to break away from the political and economic yoke of the British Empire) fought bravely to win independence from the Empire’s iron-grip, only for later generations to succumb to the many viruses from across the so-called pond – most of which are leftist-based and multicultural-obsessed to the max. Thus, two hundred and forty four years later, much of the sickness engulfing Europe has been adopted and embraced by many within America’s top leadership (elected and non-elected), and with millions of citizens in tow. It is not for nothing.

WITH this truth-telling in mind (lying atop the leftist madness which is raging throughout Europe, as well as inside America’s socio-political landscape), the “normalization” of “rape-jihad ” – via a red-green alliance – was birthed.

BUT if it all sounds too fantastical, so be it. Regardless, the evidence is overwhelming and bullet proof. Just consider the following as a drop in the bucket:

STILL yet, for those who require Koranic back-up, well, Muslimas are also on board – as they aid “the boys” in this civilizational war! Indeed, derived from the same Koranic underpinnings, sexual-jihad and slave-jihad are inspired by Muhammad.

10382: Ruling on having intercourse with a slave woman when one has a wife

Could you please clarify for me something that has been troubling me for a while. This concerns the right of a man to have sexual relations with slave girls. Is this so? If it is then is the man allowed to have relations with her as well his wife/wives. Also, is it true that a man can have sexual relations with any number of slave girls and with their own wife/wives also? I have read that Hazrat Ali had 17 slave girls and Hazrat Umar also had many. Surely if a man were allowed this freedom then this could lead to neglecting the wife’s needs. Could you also tell clarify whether the wife has got any say in this matter.

Praise be to Allah.  Islam allows a man to have intercourse with his slave woman, whether he has a wife or wives or he is not married.A slave woman with whom a man has intercourse is known as a sariyyah (concubine) from the word sirr, which means marriage.This is indicated by the Qur’aan and Sunnah, and this was done by the Prophets. Ibraaheem (peace be upon him) took Haajar as a concubine and she bore him Ismaa’eel (may peace be upon them all).Our Prophet (peace and blessings of Allaah be upon him) also did that, as did the Sahaabah, the righteous and the scholars. The scholars are unanimously agreed on that and it is not permissible for anyone to regard it as haraam or to forbid it. Whoever regards that as haraam is a sinner who is going against the consensus of the scholars.Allaah says (interpretation of the meaning):“And if you fear that you shall not be able to deal justly with the orphan girls then marry (other) women of your choice, two or three, or four; but if you fear that you shall not be able to deal justly (with them), then only one or (slaves) that your right hands possess. That is nearer to prevent you from doing injustice”….{Author’s note: read the whole thing…be prepared to vomit too.} Alas, in light of the snippets presented within, it should be entirely expected that an “infidel” woman (another victim of “rape-jihad”) was hardly supported by those whose allegiance and sympathies lie with jihadis!

A refugee worker who was in charge of eight Iraqi refugees who gang-raped a teacher blamed the attack on the victim.

The Iraqi refugees were sent to prison after being convicted of raping the German teacher in Vienna, Austria, in 2015. The family of refugees met the woman at a bar and brought her back to an apartment where she was raped.

The aid worker responsible for resettling the eight men and helping them transition into Austrian society ultimately told the media he felt as though their sentences were too severe. Off-camera, he expanded on that opinion by saying that the woman gave them “false signals” and blamed her alcohol consumption for the rape.

Only one of the men, Daily Mail reported, admitted his role in the attack and said his drunkenness was a crime in his home country and in his faith.

The woman, identified only as Sabine K., was so traumatized by the rape that she had no choice but to quit her job.

All eight men were sentenced to between nine and 13 years in prison, but were not deported back to Iraq because the country’s punishment for rape is the death penalty.

“The refugee guardians play a big role. They are like the teachers in a school,” another refugee worker said of the worker who defended the rapists. “There are lots of people who have never experienced living in an open society. They come with questions — if the women here are totally open and if they can go out and drink coffee with women.”

Many readers expressed their disgust over the incident, calling on Western governments to properly screen refugees who enter their countries.

“Can somebody explain to me why the hell people are protesting to keep these less than slugs here. What the hell is wrong with you? Everyone of them need to be sent back to the s*** hole they came from. They are infiltrating our Country and if we don’t wise up, we are in for pure hell. Send them back or shoot them, either way get them out of here,” one reader commented on Facebook.

“One fact! If they are deported back to Iraq they can not be hanged for rape. Iraq is a Muslim Country and governed by Sharia Law and it is not against Sharia Law to Rape an Infidel Female! This is the real problem with so many of the Western Governments and Justice Departments. Very few of them are even familiar with Islamic Laws and continue to act stupidly regarding treatment of Violent Muslim Criminals!!” another added.

Other readers felt that the United States should learn from incidents like the gang rape in Austria.

“Several things I have learned about Muslims, they completely have no value of life and completely no respect for life both human and animals. It’s the most barbaric culture I have ever heard of. Trump please make America strong again. Have we all forgotten about 9/11, not me, it’s etched in my mind forever. Wake up America!!!” one reader wrote.

RESULTANT, Muslim rapists (even in the heart of middle America, no less) are shielded by “sympathetic” Prosecutors, the lock-step media, etc. – in their non-remitting quest to prop up the inflow of so-called refugees into the nation. Though hailing straight from the belly of Jihadi-driven cesspools, America’s Marxist-Islamist driven (elected and non-elected) leaders are non-pulsed from halting the “process” – the very same forces who champion the entry of unending, unfettered, non-vetted illegal immigrants, many of whom are criminals. Know that their actions are a direct knock-on effect from HUSSEIN’s two-term reign of infiltration and penetration.

MIND you, all of it (and so much more) ties back to the Muslim Brotherhood Mafia and their “5-Phased Plan“; that which dovetails with the left’s quest to destroy America. Birds of a feather. Wait and see.

(One of the hot spots of conversion to Islam is America’s extensive system of prisons).

NOW, think about this: the very fact that “Phases 1 – 4” have already been accomplished (once again, refer to the “5-Phased Plan“), how much closer are Muhammadans in America to “Phase 5” – in so far that two newly-elected Muslimas to Congress, in tandem with their Islamic-laced brother’s appointment to the AG post in Minnesota, openly consort and support Jihadis, all their taqiyya (Islamic-sanctioned deception and lying) hogwash notwithstanding?? 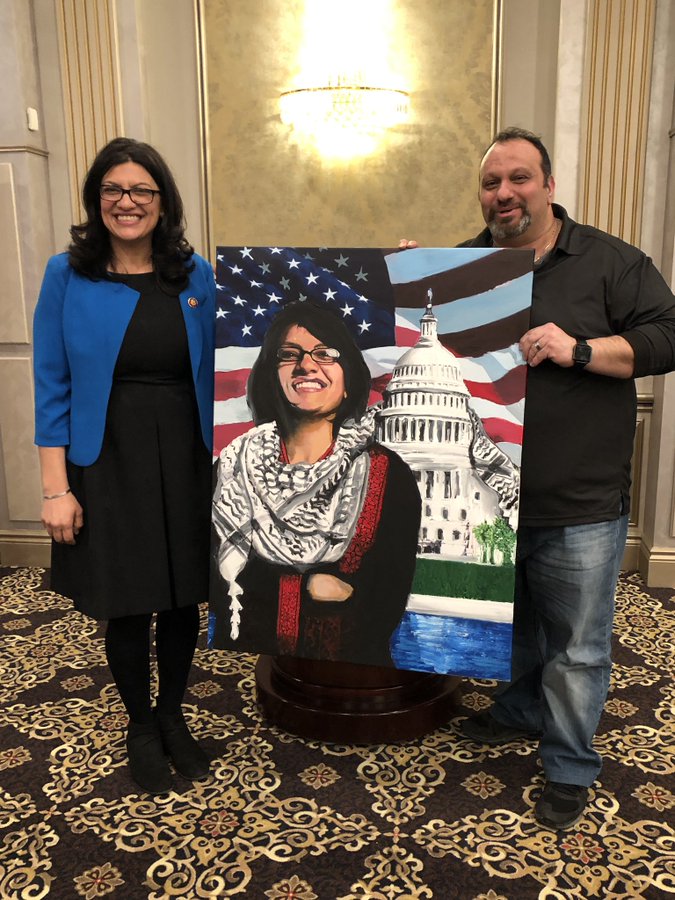 I was honored to be at Congresswoman @RashidaTlaib swearing in ceremony in #Detroit and private dinner afterward with the entire family, friends and activists across the country. #Palestine #TweetYourThobe #RashidaTlaib

In a 2015 tweet, he wrote of the leader of the terrorist group Hezbollah, “Always loved this heroic resistance leader! Long live Sayyed Hassan Nasrallah!”

EFFECTIVELY, demonstrably….illustratively….inextricably….and all related descriptors thereof: Tlaib’s (and her “sistas-in-arms”, Ilhan Omar and Ocasio-Cortez) fellow travelers are Jihadis of the highest “caliber!“

MOST significantly, westerners dare not be lulled into a false sense of security, in so far that ISIS’s formation of a Caliphate (in Iraq and Syria) has suffered some setbacks. Like water off a duck’s back….as they regroup and reconstitute elsewhere.

SO while ISIS (an offshoot of al-Qaeda in the Arabian Peninsula, AKA AQAP, of which the Muslim Brotherhood Mafia is their parent) is occupied doing this and that, their parental heads are plotting the last phase of “The Plan” within America – the main pillar of western civilization, or of what’s left of it!

CLEAR AS A BELL.

5 thoughts on “The “Normalization” Of “Rape-Jihad” & The Complicity Of Western Leadership: Its Nexus To The MB’s “5-Phased Plan” For America. Commentary By Adina Kutnicki”