AS in civilizations (and empires) that have come and gone, unarguably, America and present-day Europe are in precipitous decline. And as is (historically) known, decades of underlying factors foreshadowed the demise of yesteryear’s collapses. Indeed, little happens in a vacuum ala bolts out of the blue – at least, re the erosion of a civilization’s underpinnings. Sheesh.

IN fact, then as now, decades of neglect (whether intentional or otherwise) from elected and non-elected forces to the inherent ties that bind national ethos – coupled with the boring within of enemy agents – created causal factors to an eventual disintegration. Inevitable.

THAT being established, the fact that France is on fire (with others, threatening, to follow suit) and domestic terrorists in America continuously incite to civil war (with a “hands-off” approach by the FBI, and with local law enforcement operating via “stand-down”, politically-driven orders), isn’t it obvious that the underpinnings of the west are in dire foundational straits? If not, why not?

IN this respect, it has already been evidenced that a force multiplier exists; that which draws a straight line, a sure-fire nexus, to the west’s demise. Incontestably, it runs through the collaborative efforts of so-called mainstream media and social media giants – in seen and unseen ways – in tandem with powerful political and non-political players, a/k/a self-appointed elites.

MOREOVER, it is not for nothing that within the (Sept. 2016) book jacket of “BANNED: How Facebook Enables Militant Islamic Jihad ” – authored by yours truly and co-written with Joe Newby – that it is stated:

“POLITICIANS TALK ABOUT COMPANIES BEING TOO BIG TO FAIL, BUT IS FACEBOOK SO BIG THAT IT CAN FREELY OPERATE AS A GOVERNMENT UNTO ITSELF?“

NOT only that, others – inside and outside officialdom – are taking notice of the out-sized powers of social media/tech giants. None too accidental, nor incidental, much of the hullabaloo on Capitol Hill piggybacks/mirrors what is contained within BANNED! Hmm.

ALL of which brings the discussion right back to the absolute fact that Google (with Facebook, Twitter, Apple, Instagram alike), an American company, has embraced the barbaric (emphasis added) underpinnings of Sharia Law, Blasphemy!

A new Android app has launched with the focus of allowing Muslims to report individuals who commit blasphemy, or insult Islam.

No, this is not a joke. The app, “Smart Pakem”, which launched in Indonesia last month at the request of the Indonesian government, will allow users and government officials to uphold Sharia law and target and report people who hold “misguided” beliefs in violation of Islamic law, which forbids insults of Islam, insults against the Prophet Mohammed, or the recognition of any other religion besides Islam.

Indonesia is the largest Muslim country in the world, with an estimated Muslim population of 207 million.

Indonesia’s criminal code prohibits blasphemy, which is defined as “the act or offense of speaking sacrilegiously about God or sacred things”.

The Code’s Article 156(a) targets those who deliberately, in public, “express feelings of hostility, hatred, or contempt against religion”. The penalty for violating Article 156(a) of Indonesia’s criminal code is a maximum of five years imprisonment.

Rajan Anandan, who serves as the VP of Google in south-east Asia, has not shown any resistance to the app, which is available in the Google app store.

The National Secular Society (NSS) has since written to Anadan requesting the Google not stock the app in the app store, arguing that the app will have negative consequences for religious minorities and will further minimize freedom of expression.

According to Human Rights Watch, 125 people were convicted of blasphemy in Indonesia between 2004 and 2014. 23 additional people have been convicted since 2014.

Stephen Evans, who serves as the chief executive of NSS said said Google’s decision to stock the Sharia app was “incongruous with Google’s mission statement” and “runs directly contrary to the democratic ideals which Google says it stands for”. Evans also said the app will “normalize restrictions on freedom of expression in Indonesia and elsewhere”.

“Indonesia’s blasphemy law is a morally unjustifiable tool of repression which should be repealed as soon as possible. While this law exists anyone who believes in free expression should make it as difficult as possible for the Indonesian government to enforce the law. Google has greatly benefited from the freedom to share information globally. We ask it and other multinational companies to consider whether they can in good conscience profit from the repression caused by governments’ crackdowns on free speech.”

Since the app’s launch in the Google app store, it has been flooded with one star reviews and criticisms by anti-Sharia and human rights advocates.

YES, pay strict heed to the videos. Then, internalize how American global behemoths – in control of the flow of information across the entire internet – are shattering the underpinnings of freedom-based nations (never mind Sharia-ruled ones) through worldwide knock-on effects.

MIND you, disregard any nonsense re prison as the punishment – it is a smokescreen, a first step. This ugly truth is apart from Google’s enabling of the ultimate punishment – death! By supplying the app, in effect, Google has enforced that which is Koranic mandated. Plain and simple.

INEXTRICABLY, there is no greater transgression in Islam than insulting or denying the “prophet-hood” of an Islamic prophet – never mind drinking water, if an infidel, from a fountain in a Muslim majority country which is punishable by death! In fact, if not for severe international pressure (mainly, via Christian organizations and alternative media) applied to the case of Asia Bibi, she would be six feet under! Yes, millions (over the years) have not been spared the ultimate penalty for the “crime” of Blasphemy.

IN light of the west’s downward spiral (a smidgen of which is demonstrated above), it is hardly shocking that a so-called refugee was acquitted of rape – actually, rape-jihad – because of “ differences in cultural norms” You got that?

A refugee from Bangladesh was tried by a French court and was acquitted of the rape of a high school girl. The verdict was handed down yesterday.

The young man also sexually assaulted another young girl. He was charged with both cases but acquitted of the rape.

According to the defense the refugee has ‘different cultural norms’ or ‘cultural codes’ and could have misinterpreted the contact with the girl.

Experts who investigated the man, described him as narcissistic and self-centred and that in the male culture of Bangladesh, his country of origin, “women are relegated to the status of sexual object”.

Both incidents happened near the end of 2015. The accused, aged 18 at the time of rape, went for a walk with a 16-year-old girl who attended the same high school.

He suggested they go his house in Saint-Lô. There, he kissed her, touched her and groped her genitals.

The girl managed to leave the room. She then reported the incident to the Principal of her school who informed police.

In custody, the refugee says that the girl was consenting and the police closed the case. After which the young girl attempts suicide in late 2015 was hospitalised for a week.

Four months later the refugee was arrested again and the final verdict was handed down yesterday.

The refugee is acquitted of the rape but sentenced to two years in prison as a suspended sentence for the sexual assault of the first victim.

He will be registered in the sex offender file, according to the court’s decision.

TRUTH dare be told (despite all the PC apologists and their hogwash denials, a/k/a speech-minders throughout America in specific and the west in general), there is little doubt that a leading Mohammedan, Anjem Choudary (as well as others), is right on target – if not in the two-year stated time-frame, but in the end-game. How so? Listen up:

“The Prophet said: ‘There is no god but Allah,’ said Thbait. “Instead the [elites of Mecca] rejected. They offered the Prophet wealth, status, and political representation – a seat on the executive branch within Mecca’s secular order – all to avoid this statement and its implications. Yet he rejected their offers and continued his journey towards radical change, providing us with step-by-step instructions on how to make this religion supreme.”

“The elites of Mecca would use every possible measure to coerce or contain Muhammad‘s call for change within specific parameters,” he added. “Those parameters would permit the changing of anything that did not threaten their system and infringe on their power. But this message is not here to integrate. It is here to dominate. Islam is here to dominate! This was an ideological struggle, the sole purpose of which was to organize Man’s affairs in accordance with a system revealed by Allah.”

“There was no room for compromise,” Thbait continued. “Instead Allah revealed to the Prophet, saying: ‘Proclaim openly, as commanded, and turn away from those who associate others with Allah.’ ‘Proclaim openly, as commanded by Allah’ – this is our activism. It is free of polytheism, the polytheism of a secular system. Activism within a flawed infidel system is forbidden.”

There is definitely a problem with polytheism in our land, but Islam will not help that since it is a flawed ideology that thrives on death, not life, and because it is an anti-christ religion at its heart.

You cannot raise your hands to Allah, while extending your hands to men for legislation. Every four years, you do just that. Muslims are pressured to get out there and vote, believing somehow that their insignificant numbers have an impact. The effort to get Muslims out there to vote has never been about their significance. It is part of an effort to assimilate Muslims.

The argument used was always the “lesser of evils.” So now, killing millions of Muslims is a “lesser evil.” “What is the matter with you? How do you judge?” [Quran 68:36] The ballots have brought you nothing but disgrace, and have soaked you with the blood of your Muslim brothers and sisters. The problem with their system is not the scores of dead. It is deeper than that. It is their secular faith. It is in direct opposition with our creed, when Allah says: “Legislation belongs to none other than Allah.”

Muhammad and his companions established for us a political system where sovereignty belongs to Allah and not to the elites, where politics meant caring for the affairs of Mankind, not only the elites, where da’wa was conveyed to the whole of society, not only to the oppressed and excluding the elites. This system was not for the 99% or the 1%. This system was for the 100%. For those of us in the West, Allah granted us the opportunity to be amidst a people so misinformed that the truth we offer will resonate. Our voice is our greatest weapon, and our silence is our worst enemy….. 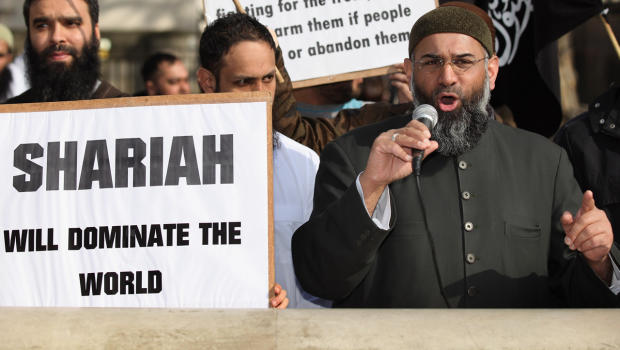 AND, by the way, it is not an accident that this Jihadi expert has been called upon to analyze this and that, including, the likes of Choudary – in relation to 43 Islamists on trial for Euro-terror plot.

AS to the question posed from the onset: What’s the (western) prognosis? The answer is: Draw your own conclusions.

{Hint: Google Launches New APP For Muslims To Report “Blasphemy”….basically, having the blood of countless “offenders” on their hands and in support thereof!}