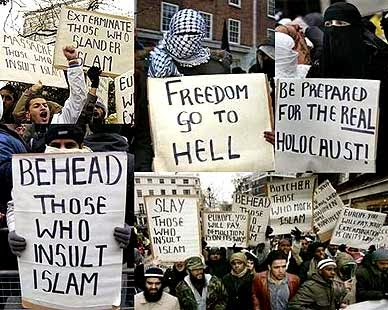 THOSE who are regular readers of these pages can’t help but notice a particularly incessant drumbeat; that which is laced with proof after proof (enough to choke a stable of horses) regarding Islam’s infiltration and penetration into the west and attendant dangers thereof. AKA knock-on effects.

BUT for others who are newly on board, no worries. A recap is on tap to catch up to speed. Even so, for this discussion, let’s stick to two of their spears out of countless – one which is more well-known, the other, not so much. Afterwards, it will become incontestably clear why the “status quo” – by allowing the Islamic infection and invasion into America in specific and the west in general to stand as is – must be uprooted. Still yet, bear this in mind: even though the “Saturday People” are first in their cross-hairs, the “Sunday People” have gotta go too.

EVEN so, despite all the “proof in the pudding”, it is a verboten topic. Taboo.

TO wit, whereas so-called mainstream media would never and never touch the following truth-telling – regardless of all of the back-up evidence, even if presented on a silver platter – thankfully, Israel National News (Full Disclosure: it is a major Israeli news outlet that yours truly has written for) has no such qualms. To the contrary.

Muslim immigration into North America has brought with it several religious preachers who call for the murder of Jews. This happens sometimes in mosques where these words are occasionally even cheered by the hating faithful. This type of incitement is also frequently found on social media.

The same extreme hate-mongering by Muslim preachers in Western Europe has been previously exposed by this writer. The incitement by Muslims against Jews in the Western world has increased as a result of the non-selective immigration policy of these countries. Hate imams living in democracies calling for the murder of Jews is a reality which is not looked at systematically despite the fact that it should be subjected to extreme scrutiny.

A few examples of North American imams calling for the murder of Jews will illustrate this. In 2017, Ramadan Elsabagh head of the Islamic Services Foundation Quran Institute in Garland Texas, posted a recorded prayer to his Facebook page calling to “destroy the Zionists and their allies, and those who assist them and those who allowed them into the abodes of the Muslims. . . Oh Allah save [Al Aqsa] from the hands of the accursed violators. . . . Oh Allah destroy them.” Elsabagh is also a featured Quran reader on many internet sites.

When President Trump recognized Jerusalem as the capital of Israel in December 2017, Imam Raed Saleh Al-Rousan of Houston, Texas preached that “Muslims should fight the Jews.” He spoke in Arabic. The Washington-based MEMRI Institute uploaded an English translation of his inciting words to their website. Al-Rousan then apologized saying that he is opposed to all forms of terrorism.

Around the same time, Imam Abdullah Khadra of Raleigh, North Carolina mentioned a Hadith – a traditional saying of Mohammed – about killing Jews.

In Jersey City. New Jersey, Imam Aymen El Kasaby called the Jews “apes and pigs.” He promoted their annihilation and was cheered on by people attending his sermon. He prayed to Allah: “Count them one by one, and kill them down to the very last one, do not leave a single one on the face of the earth.” The worshippers responded Amen”…… ….continue reading (even if your blood is boiling, as it should) to internalize the extent in which Islam’s poison has infected America, Canada, and the west at large.

WHICH brings the discussion to the second spear, again, out of countless.

ADDING insult to grave injury, this wannabe Jihadi is not only highly dangerous and an absolute public health hazard – no kidding – but an ingrate! Yes, a full-blown ingrate. How so? She received her medical education at a JEWISH institution, one in which even Muslims are welcome to study! You got that? However, upon learning that their recent graduate has deep-seeded murderous rage towards Jews, well, that was a (multicultural) bridge too far, even for their inclusive way of thinking.

Touro College is appalled by the anti-Semitic comments reportedly made by Lara Kollab, a graduate of the Touro College of Osteopathic Medicine. The mission of Touro College is to educate, perpetuate and enrich the historic Jewish tradition of tolerance and dignity.

AND while she was kicked out of her residency program at the Cleveland Clinic, that’s just a temporary band-aid, so to speak. In no uncertain terms, every effort must be made to permanently bar her (and others of said ilk) from practicing medicine in the US – for that matter, anywhere in the west. After all, from the get-go, she made her intentions crystal clear – in violation, in mockery, of the basic and core tenets of the Hippocratic Oath. As excerpted:

I SOLEMNLY PLEDGE to dedicate my life to the service of humanity;

THE HEALTH AND WELL-BEING OF MY PATIENT will be my first consideration;

I WILL RESPECT the autonomy and dignity of my patient;

I WILL MAINTAIN the utmost respect for human life;

I WILL NOT PERMIT considerations of age, disease or disability, creed, ethnic origin, gender, nationality, political affiliation, race, sexual orientation, social standing, or any other factor to intervene between my duty and my patient;……

BUT there’s more. As indicated, she is not an anomaly. She is, by far, not the first Muslim medical practitioner to go “rogue.” And herein lies the American/western danger.

The Qur’an tells Muslims that the Jews are the strongest of all people in enmity toward them (5:82), accursed by Allah (9:30), and always scheming against the Muslims (2:79; 3:75-3:78, 3:181, etc.). These and other Qur’anic passages likely provide some insight into Kollab’s mindset. They also may explain the actions of the Muslim doctor in Belgium who refused to come to the aid of a 90-year-old Jewish woman who had suffered a rib fracture, saying: “I will not come! Send her to Gaza for a few hours, then she will not feel pain anymore.”

A Muslim Doctors Without Borders nurse, Hani Mohammed Almajdalawi, outdid both Kollab and her Belgian colleague and took her Jew-hatred even farther, actually firing upon Israeli Defense Force troops at the Gaza border.

The Qur’an also tells Muslims that they can seize infidel women (“captives of the right hand”) and use them as sex slaves (4:3, 4:24, 23:16, 33:50, 70:30). Those Qur’anic passages illuminate the likely mindset of the Muslim doctor, a migrant from Syria, who raped four patients while serving as an assistant doctor at a hospital in Bavaria.

Likewise Houston doctor Shafeeq Sheikh, who was convicted of raping one of his patients at Houston’s Ben Taub General Hospital, despite his insistence that she, though sedated and attached to machines, made advances upon him that he, the irresistible lug, couldn’t fend off. In Britain, the energetic Dr. Amirul Haque sexually assaulted five of his female patients over one ten-day period.

Also in Britain, another Muslim migrant physician, Imran Qureshi from Pakistan, demonstrated that the victims need not be non-Muslim women if a Muslim woman indicates that she may not be the niqab-wearing type: Qureshi, according to MailOnline, “said the 21-year-old woman was ‘sexually available’ because she had previous boyfriends.” Continue reading about “soldiers for Allah” who set out to wage Jihad under the banner of medicine!

BOTTOM LINE: A CALL TO ACTION

WHILE the chance(s) of convincing multicultural-obsessed and apologetic academics/administrators in America (the west) to properly vet prospective Muslim medical students – re their views on Jews and Christians – is less than slim to none, or, as likely as pigs learning to fly, it doesn’t excuse rational folks from performing their own due diligence. An end-run, if you will.

TO reach said goal post, it is imperative to get the (conversational) ball rolling. For all practical purposes, those who already have access to widely-read platforms are “called to action” to create a cascading domino-like effect. Then, and only then, the groundwork will have been laid for a full-court national discourse. But if the idea is too disquieting, think about it this way: every anti-western, anti-traditional insanity is gifted a full-on free pass – from “proper” toilet access for this, that, or another so-called gender, and to so much more. So, by extrapolation, why isn’t the potential life-threatening risk to millions of non-Muslims considered to be of equal and intrinsic value? If not, why not?

TO wit, rallying behind a concerted public awareness campaign – whose sole aim is to sound the alarm, irrespective of any and all screams and charges of “Islamophobia” – is more than righteous. Besides, as repeatedly evidenced, “Islamophobia” is a made up of whole cloth bugaboo, invented by various hydra-based propaganda arms. So, just close your ears to their ever-ready bludgeon, that which is designed to squash the truth.

NOW, while it is also the case that many Muslims perform their medical duties with the best of intentions, one can’t deny the fact that Muhammadans are (more often than not) brainwashed with murderous hatred towards Jews and Christians. It is fact-based that Islam and blood-lust are inextricable, discomfiting as it is.

ALAS, since no one in authority will dare to do what is morally right and necessary to protect the non-Muslim public, it behooves others to pick up the slack. The mantle. The gauntlet.

CONCLUSIVELY, a personal shout-out from this “yahoodi” to Lara Kollab becomes mandatory due diligence:

Hey, you بغيض /hateful Muslima, daughter of moon-god Allah, listen up: some of us are paying attention; who also happen to have access to a wide range of media resources – among other assets. So, know that you are now put on notice, as others will be. At the same time – by revealing your blackened heart – you placed a target on this danger in a very frontal manner. For that, this American-Israeli – a right-wing Zionist to boot – thanks you!! Yalla….يلا نلعب ……