AKIN to political hits within dictatorships (ala strongmen who give the orders to make their opponents and whistle-blowers “disappear”), as well as Mafioso crime bosses (who gun down enemies, wherever they are), trust, The Clinton Crime Family lies in infamy as America’s most accomplished goon squad. Indeed, countless “mysterious” deaths surround them, that is, whenever their presence becomes a liability. Hot. Toxic.

NOW, let’s just put it out there: the lying, fake-stream media has their backs. This is in tandem with countless political operatives – at home and abroad – who execute their bidding through pay-for-play. Thus, whenever the truth starts to surface, almost, as if in unison and on cue, they exhort: conspiracy theory! But never mind….falling on deaf ears….

STILL, before the latest “mysterious” death surrounding the most infamous political crime family in American history is explored – by the way, a cartel which is tailor made for RICO charges – absolutely, due diligence mandates a well-documented charge sheet, even if abbreviated.

In Hillary and Vince: a story of love, death, and cover-up, the truth is revealed and the lies are exposed by Dean W. Arnold; an award winning author and investigative journalist.

The death by gunshot of Hillary Clinton’s lover, lawyer, and best friend in 1993 was the highest suspicious death of a government official since JFK. Deputy White House Counsel Vince Foster handled the Clinton’s most secretive matters and hired investigators to track down and threaten dozens of women sleeping with Bill. Among the many very questionable items in the investigation of Vince Foster’s death are the following: The coroner’s report says x-rays were taken, but when he testified to Senators none were taken. When a paramedic approached Foster’s body, he saw men running away into the woods. The first person to find Foster’s body guarded the entrance to the CIA. Hillary testified she did not see Foster during the month before his death. A staffer testified she was in Foster’s office at least four times.

BUT not one to mix apples and oranges, so to speak, why would the following medical professional state the following – in explanation as to why she can’t “out” herself – after discovering Hill’s illness during her presidential run? You decide.

I am a professor at a medical school. I have taught at three institutions (currently in my third). I will not provide my exact credentials because several people who have tried to speak out against Hillary Clinton have been killed (look up “Clinton Body Count”). The Clintons have also ruined the lives of others who have spoken out, including Drew Pinsky. Drew Pinsky had his show canceled and received death threats, and Huffington Post writer David Seaman was terminated and is living in hiding for his columns about Hillary’s health. Thanks for understanding the reason why I do not disclose my exact credentials.

MIND you, it would take a (more than) Herculean effort to list and document the charge sheets in toto. Regardless, keep uppermost in mind: as to the chosen method to execute this and that kill, it just depends. Intrinsically, be it through a staged suicide, homicide via robbery or what not, the facts on the ground remain the same: dead is dead!! You got that?

ALAS, as rational folks close their ears to the tsk, tskers and noisemakers (whose sole aim is to distract from the criminally liable truths re Clinton, Inc.), the by-product is that they are able to decipher and discern what’s what – irrespective of the modus operandi, that is, that another victim lies atop their highly-stacked body count! Not only that, know that the “mechanics” of this and that hit may never be known. Yet, in reality, this is a matter for the authorities, but only if they are upholding their sworn duties.

AS many have come to expect and tragically accept, in concert with a “see no (Clinton) evil, hear no (Clinton) evil” back-benching media, law enforcement (Feds and local, including, the vaunted NYPD) lack the balls (while some are actually on their side) to tangle with (and to lock up) the MOST powerful crime family in the nation. How much longer will millions of patriots tolerate the intolerable, effectively, allowing their crimes to go unanswered?

ONTO the latest so-called victim of “suicide”…..

ACCORDING to BuzzFeed (a left-wing smear-machine/propaganda site, posing as the go-to online address for “all the news that’s fit to print”) there is “no there there”, when it comes to the “suicidal” death of Anthony Bourdain, June 8, 2018. Bull-sh*t.

As of early Friday afternoon — a week after the news of Anthony Bourdain’s death — the second non-news mobile search result on YouTube turns up a bizarre conspiracy theory about Anthony Bourdain being on the verge of “exposing elite pedophiles” before his death.

Anthony Bourdain had been harassed and threatened by Hillary Clinton operatives just weeks before he was found dead in an apparent “suicide.”

According to investigators, Mr. Bourdain was planning to expose pedophile rings connected to Hollywood and D.C. shortly before his death.

His body found Friday after reportedly hanging himself. He was just 61 years old.

Bourdain was a fierce critic of Harvey Weinstein and denounced the serial sexual abuser, calling for swift justice to be served.

During his condemnation of Weinstein, he publicly stated that Hillary Clinton had full knowledge of the sexual abuse, and had done so “for years”:

“know what Hillary Clinton is NOT? She’s not stupid. Or unsophisticated about the world. The Weinstein stories had been out there for years.”

So go for it , but no one would give a shit if it wasn’t Trump and he wasn’t President. A lot of people are shady, or assholes , that mean the Feds can jack you up? He was shady 2 years ago no warrants?

..and I am in no way an HRC fan. I’ve been on the receiving end of her operatives’ wrath. And it ain’t fun,

It’s no secret that people who cross the Clinton’s wind up dead … mostly from suicide. Just this week, famous designer and Clinton Foundation member, Kate Spade reportedly killed herself. Spade hung herself as well, NYPD officials said. Are Spade’s and Bourdain’s deaths both coincidences? or are they added bodies to the list of folks who made the mistake of angering Hillary and Bill?

Newmediacentral.net reports: Back in October of 2017, CNN’s Bourdain made statements regarding Harvey Weinstein, suggesting Hillary Clinton had to know of his history of being a sexual predator. Bourdain’s girlfriend, actress Asia Argento, accused Weinstein of raping her.

The tweet angered Hillary spokesman, Brian Fallon. He took to Twitter to tell Bourdain to “eat a scorpion.” Many other Clinton winged monkeys followed suit.

know what Hillary Clinton is NOT? She’s not stupid. Or unsophisticated about the world. The Weinstein stories had been out there for years 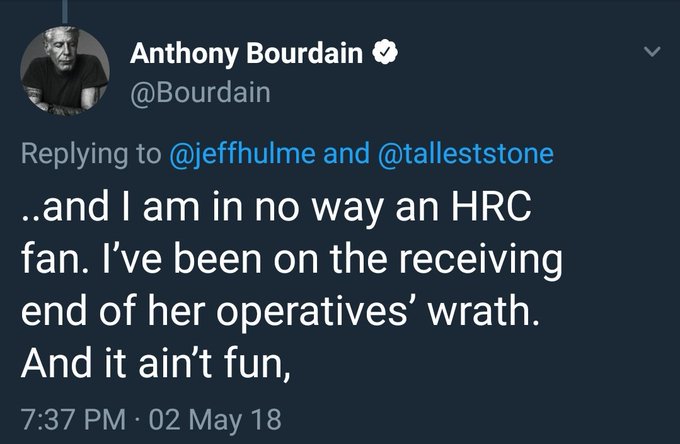 One month ago today, Anthony Bourdain tweeted he was not a fan of HRC, and he was on the receiving end of he’d operatives’ wrath.
One month ago…

MOST significantly, before naysayers tsk, tsk in this direction for sundry reasons (as well as due to the “in your face” methods of the above truth-teller, that which some may find discomfiting), it won’t make a dent to folks who can see from there to here. Besides, rational thinkers must admit the none too coincidental timing of Bourdain’s “fortuitous” demise on June 8 for Clinton, Inc. – a mere three ! days after he (more than) hinted at upcoming revelations. Hmm.

BUT just in case his last Instagram posts (cited atop the page) go down the rabbit hole and disappear from these pages alike (yes, it has been known to happen), they are re-created below for the evidentiary trail.

Anthony Bourdain on June 5, 2018 while on Instagram typed “I have information that will lead to the arrest of Hillary Clinton”.

And Another message on May 2, 2018 Anthony Bourdain said on Instagram “Let’s assume, for purposes of discussion, that HRC is Satan’s consort and eats children and puppies whenever possible.In what way is Mikey Cohen, the president’s fixer, NOT a problem?”

Another message on May 2, 2018 Anthony Bourdain said on Instagram in a reply to a couple of people he said…and I am in no way an HRC fan. I’ve been on the receiving end of her operatives’ wrath. And it ain’t fun.”

14 thoughts on “Clinton Body Count Ticks Up Ala ANOTHER “Suicide”: When Is Enough Enough? Commentary By Adina Kutnicki”