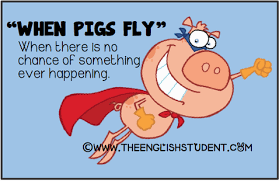 STIPULATED, as unrealistic as a flying pig scenario is, it is just as impossible to obtain victory – aka to win the war – without inflicting damage upon a hostile population in the midst of battle. Pray tell, what is so hard to understand about that? Moreover, what’s wrong with a “them or us” calculus?

HENCE, stepping it up a notch – as discomfiting as it is for some – even innocent civilians invariably get caught in the crossfire. Nevertheless, the fact remains that without the wider support of an enemy’s population – material or otherwise – it would be much harder for their leadership to continue on a war-footing. So, in effect, there is no alternative – unless defeat has become the preferable or acceptable fall-back outcome – other than to pummel the enemy’s leadership and population into submission. Deal with it.

MORE specifically, does anyone believe that tap-tapping the Nazis during World War 2 would have subdued them or dissuaded Japan’s aggression. had massive force not been used, regardless of civilian casualties? In other words, rational leaders do everything in their power to ensure that the enemy is stopped in its tracks, thus, ceasing their aggression as quickly and punishing as possible. In effect, attaining victory is a deterrent to future acts of war! Not only that, in the long-term, civilian lives – on both sides of the conflict – are spared, that is, once the rabid enemy aggressor is put down.

WHICH brings us to the western crises at hand; a moment in time whereby one leadership is demonstrably mentally besieged (to the degree of materially aiding, over and over again, a Jew-hating, highly belligerent enemy population), whereas the other critical care case originates from an anti-American/western prism. Indeed, the leadership of the Free World trained (and continues to) those who are now ISIS’s military leadership! Wait and see.

(A display of some of Hamas’s missiles, having exploded inside Israel’s population centers.)

HEADING back to Israel’s unfit leaders, in this regard, knowing that Gazans overwhelmingly voted for Hamas in 2006 – thereby, sweeping them into power – surely they are as responsible as their warlords for their fates, whatever that may be. Indisputable.

REGARDLESS, like drunken sailors, Israel’s leaders continually aid (one may rightfully suggest, abet) the genocidal Jew-hating arm of the Muslim Brotherhood Mafia, Hamas, and its Gazan (aka Palestinian) population. They are one and the same. Let that monstrous truth sink in.

MIND you, meanwhile, Israel’s elected poohbahs – alongside non-elected elitists – have the utter audacity to pat themselves on their backs for assisting ! the Gazans, as if they can be separated from Hamas, the leaders they ushered into office who unremittingly wage murderous jihad on Israel’s Jewish population centers! Did you ever??

The Dutch government will assist Israel in improving water and gas supplies to energy-strapped Gaza, Prime Minister Benjamin Netanyahu said on Tuesday during a visit to the Netherlands.

Netanyahu said that while his government is in a conflict with “terrorists” in the Palestinian territories, Israel still wishes to improve the quality of life for most people living there.

“We have no battle, no qualms with the people of Gaza,” he said. “The first step is to improve the supply of energy and water to Gaza, including laying a gas pipeline.”

He said he was publicly committing to making it happen.

Gaza faces an energy crisis due to damage to its electric network from past conflicts, together with Israel’s coastal blockade and other sanctions and restrictions.

Currently the Strip has electricity less than half the time, using an 8-hour on, 8-hour off rationing system.

A gas pipeline from Israel could allow Gaza’s power plant to double generation from around 200MW at present.

Water supplies to Gaza and the West Bank have long been a point of tension between the neighbors, with the Palestinians saying Israel prevents them from accessing adequate water at an affordable price.

Netanyahu did not elaborate on details of the gas pipeline plan, saying only the Dutch, with their long history of water management, would help.

Earlier in the week, Japan said it wants to turn the dusty West Bank city of Jericho into a pipeline for Palestinian goods to the Arab world.

It has pumped $300 million into a new complex in Area A, known as the Jericho Agro Industrial Park or, as the Japanese have dubbed it, the “Corridor for Peace and Prosperity.”

Israel has added $50 million to the project, according to Deputy Minister for Regional Cooperation Ayoub Kara.

JUDICIOUSLY, whose fault is it that Gazans are having electrical problems? And why the hell is it Netanyahu’s (in reality, foisting it upon the Jewish majority public at large, those taxpayers who will really ante up!) problem, as he pledges his support through “publicly committing to making it happen.” Is he certifiable, or what? Besides, doesn’t he realize that the onus is upon their murderous leadership and attendant terror apparatuses, which has never ceased rocketing and blitzing Israel, even up until the end of August 2016? And how about Hamas’s rocket attack upon an Israeli kindergarten in July 2016? Is this not indicative of an unquenchable, unremitting war-footing? Rhetorical.

SO, how can Israel’s leaders justify the rebuilding of a genocidal foe’s construction projects, let alone supply them with their energy needs, that which merely gifts them even more opportunities to literally fuel their next jihadi war efforts against Israel, the pejoratively named “Zionist entity”? What’s going on here?

CONSEQUENTIALLY, not only are Israel’s leaders mentally besieged, they are truly unfit to lead. Of this, let there be no doubt.

ALONG the same jihadi trajectory, it should have been expected that HUSSEIN and gang would fling open the nation’s doors to tens of thousands similarly inclined – Shariah Law abiding – militant Islamists, aka “refugees.” Not only that, the overachiever actually hit his 10,000 quarterly targeted goal ahead of schedule. O M G!

NOW, this American-Israeli investigative journalist has more than one dog in this fight, so to speak, that which DIRECTLY affects the safety and security of both nations. This core concern has been more than established at this site and elsewhere. Most recently, within BANNED: How Facebook Enables Militant Islamic Jihad, said existential struggle is unequivocally exposed.

INCREASINGLY, many are now aware that HUSSEIN Obama has lent various helping hands to Islamic jihad – Sunni and Shia alike. Concomitantly, to ISIS itself. More than proof-worthy.

ALAS, how shocking is it to find out that the devil in the White House is responsible (yes, the buck stops at his door!) for training ISIS military commanders? Again, rhetorical.

Gulmurod Khalimov, the new ISIS military commander whom the U.S. just days ago announced a $3 million bounty for, was trained by the State Department in an anti-terror program as recently as 2014 while serving in the security service of Tajikistan.

He replaces former ISIS commander Tarkhan Batirashvili, aka Umar al-Shishani, who was also trained by the United States as part of the Georgian army and who ISIS claimed was killed fighting in Iraq this past July.

The State Department confirmed Khalimov’s U.S.-provided training to CNN in May 2015:

“From 2003-2014 Colonel Khalimov participated in five counterterrorism training courses in the United States and in Tajikistan, through the Department of State’s Diplomatic Security/Anti-Terrorism Assistance program,” said spokeswoman Pooja Jhunjhunwala.The program is intended to train candidates from participating countries in the latest counterterrorism tactics, so they can fight the very kind of militants that Khalimov has now joined.

Unironically, the State Department spokeswoman said that Khalimov had been appropriately vetted:

“All appropriate Leahy vetting was undertaken in advance of this training,” said spokeswoman Jhunjhunwala.

At that time, Khalimov appeared in a video threatening the United States:

“Listen, you American pigs: I’ve been to America three times. I saw how you train soldiers to kill Muslims,” he says.Then, he threatens, “we will find your towns, we will come to your homes, and we will kill you.”

Khalimov and Batirashvili are hardly the first terrorist leaders operating in Syria to have been trained by the United States.

INEXTRICABLY, for the most part, Israel’s top leaders operate from a mentally besieged prism, consequently, rendering them unfit to lead. On the other hand, the fact remains that HUSSEIN Obama (and surrogates) is ideologically in sync with those he aids and abets. Intrinsically, his aim is to bring down America, with Israel as a cascading domino.

EVEN so, the knock-on effects of both leaders are one and the same: dead Jews on the one hand, and dead Americans/westerners on another. Pick your poison.

BUT when all the muck is sifted through, know that Judaism’s ancient texts are as relevant today, as they were centuries ago. As is stated in the Midrash Rabba, Ecclesiastes 7:16: