AS jihadi cells await orders to strike throughout Europe and America – the west in toto – ISIS leads the onslaught for their Sunni brothers and sisters-in-arms. Make no mistake: whether ISIS takes “credit”, or another one of the Brotherhood hydra, is of no consequence. Dead is dead. Never, ever, forget that.

Targets for attacks include businessmen on their way to work, young people playing sports in the park and even “the street vendor selling flowers to those passing by.” A photo from what appears to be a British market vendor selling flowers has a caption beneath it that reads “Even the blood of a merry crusader citizen selling flowers to passersby.”Jihadis are urged to strike such soft targets with no special precedence to attack soldiers or policemen, but rather to strike terror into the hearts of all disbelievers.Rumiyah is a reference to an Islamic prophecy that foretells the downfall of Rome following the collapse of Constantinople which fell in the Muslim conquest of 1415 and calls for the targeting of all non-Muslims…..In a chilling essay entitled “The Kafir’s blood is Halal for you. So shed it,” the magazine cites references from the Koran and early Islamic scholars that the war against the non-believer is not limited to the ‘enemy’ fighting “frontline operations.” Rather “he has also ordered that they be slain wherever they may be – on or off the battlefield.”At the conclusion of the article, Muslims who live in “Dar al-Kufr” (literally land of disbelievers) are told that shedding “the blood of the disbelievers is halal (permissible) and killing them is a form of worship to Allah, the Lord, King, and God of mankind.”

BE that as it may, those with their faculties intact – let alone who possess a modicum of political clarity and moral integrity- surely intuit that HUSSEIN’s administration did everything to empower ISIS ala the Sunni Brotherhood Mafia, at the same time that he brought Iran’s mullah masterminds to (“legally” sanctioned) nuclear-armed status. What an overachiever! No doubt.

BUT before we get to the heart of the matter, the meat, so to speak, it is imperative to internalize the underlining basis of the most dangerous “deal” ever made between the leadership of the Free World and Islam’s terrorist masterminds.

IN other words, the question becomes: Why would any western leadership get in bed with anti-American, nihilistic, genocidal mullahs, regardless of anything else? Well, in a nutshell, the smoke begins to clear when the money trails are followed. Thus, the MEGA financial deals are revealed. Inextricably, for a certain subset, said collusion is a combination of greed and ideological kinship. Indeed, this is particularly the case for HUSSEIN and his main surrogates, namely, Iranian-born Valerie Jarrett, John Kerry, a few others within his administration, and his key puppeteer, George-the devil incarnate-Soros. Two-fers.

LIKE it or not, the above charges have been proven via the thoroughly documented exposé, the “House of Bribes.” Incontrovertibly, this evidentiary trail was amassed more than a year before the Washington Times confirmed as much, just this past week.

The Obama administration and its allies cut a “secret” agreement allowing Iran to evade key restrictions under last year’s nuclear deal so Tehran would be able to receive major sanctions relief by the deal’s deadline, according to a report Thursday that put the White House on the defensive again about the controversial deal.

The report from the Institute for Science and International Security — a think tank run by a prominent former U.N. weapons inspector — said loopholes have been created to allow Iran to exceed limits set by the actual deal on the amount of uranium it can keep on hand in its various nuclear facilities.

Republicans were quick to jump on the report from the respected think tank, which comes as Iran’s military has staged a series of aggressive challenges to the U.S. Navy in the Persian Gulf and Mr. Obama was already under fire for his handling of a prisoner swap with Tehran in January that coincided with the payment of a major settlement to Iran.

“The exemptions or loopholes are happening in secret, and it appears that they favor Iran,” David Albright, the former inspector, told Reuters, which first reported on Thursday’s report, the claims of which have not been officially verified.

Clearly stung, administration officials pushed back hard Thursday, claiming the assertions were baseless and that lawmakers on Capitol Hill were briefed on both the public and classified parts of the deal.

The notion that some sort of secret deal undercut the nuclear agreement is simply “not founded,” said State Department spokesman John Kirby, who said a team now overseeing the accord’s implementation “has not and will not loosen any of the commitments, and has not provided any exceptions that would allow Iran to retain or process material in excess of its [the agreement’s] limits.”

“There’s been no moving of the goalposts,” Mr. Kirby said. “Any suggestion to the contrary is just false.”

But critics were already pouncing. The report “will deepen concerns the administration is hiding damaging information about concessions it’s made to Iran,” said Omri Ceren, a managing director at the Washington-based Israel Project.

“ISIS confirmed the U.S. and its partners gave Iran exemptions,” Mr. Ceren wrote in an email blasted out to news organizations, using an acronym for the Islamic State. “As with past concessions, Congress was only briefed on the details ‘in a confidential manner,’ and so the details were kept from the public.”

The report is likely to deepen frustration among Republicans, whose presidential nominee, Donald Trump, has vowed to overturn the deal if elected in November.

The agreement, signed by Iran with the U.S., Britain, France, Russia, China and Germany, eases a series of international economic sanctions on Tehran in exchange for curbs of up to 15 years on Iran’s suspect nuclear programs.

Several GOP lawmakers have accused Mr. Obama of intentionally keeping Congress in the dark on critical details of the deal reached last summer.

“This is yet another example of the administration’s false choice it presented to the American people in selling the flawed Iranian deal that provides the mullahs a patient pathway to the bomb,” Sen. Corey Gardner, Colorado Republican, said Thursday.

The administration was already under fire for a $400 million cash payment in January to Iran on the same day five Americans held prisoner by Iran were freed. The money was part of a settlement for a failed U.S. military sale to Iran dating back decades.

Mr. Obama had vigorously denied the payment was a kind of “ransom,” but the ransom payment’s timing was sensitive. It came just as the so-called “joint commission” of international officials assigned to oversee the implementation of the Iran nuclear deal were finalizing the accord’s final terms with Tehran. Mr. Kirby later acknowledged the payment was held up as “leverage” to make sure the American prisoners were allowed to leave Iran.

The two most striking exemptions, according to the Islamic State report, relate to Iran’s uranium stockpiles. The report said commission members secretly agreed to allow Iran to exceed the nuclear deal’s publicly stated limits on how much low-enriched uranium it can possess — material that, if purified into highly enriched uranium, could be used to develop a nuclear weapon.

It also cites a “knowledgeable” but unidentified senior official saying that some of Iran’s nuclear facilities would not have been in compliance with the deal by Jan. 16, the deadline for the beginning of sanctions relief, if the exemptions weren’t granted.

The Islamic State analysts say Obama administration officials actually informed Congress of the exemptions in a confidential report on that very day, the so-called “Implementation Day” of the nuclear accord. But Democratic Senator Robert Menendez, a leading critic of the Iran deal and a senior member of the Senate Committee on Foreign Relations, told Reuters that he “was not aware, nor did I receive any briefing [on the exemptions].”

Committee Chairman Bob Corker, Tennessee Republican, told wire services that the Obama administration was “willing to accommodate Iran at every turn to implement a flawed agreement that granted Tehran billions in sanctions relief and paved the way for the industrialization of its nuclear program.”

AUDACIOUSLY, Ben Rhodes, the administration’s masterful storyteller, spin-meister and propagandist, admitted that their goal was “to spin the f-ck out of” the so-called “deal”, that which had been in the bag all along!

Ben Rhodes, President Obama’s Deputy National Security Adviser for Strategic Communications, is highlighted in a recent piece by the New York Times which quotes Rhodes as admitting the Obama administration lied to the American people, Congress, and our allies in how they “spun” the Iran deal.

The revelations are simply astonishing but not surprising. It seems the goal behind the Iran deal was to extricate the United States from long-standing alliances in the Middle East, including Israel. This was done to be able to close the Iran nuclear agreement.

The Soviet Union would have been proud. This disclosure shows that anything the Obama administration puts out is nothing short of sheer propaganda and cannot be trusted; but, we knew that already didn’t we.

The reaction to the NYT piece by David Samuels has been swift and fierce. Hudson Institute adjunct fellow Michael Pregent opined: “Dude thinks he’s on ‘House of Cards’ – Rhodes lied to sell Iran Deal and is proud of it.”

ASIDE from all else, it is incontestably the case that the knock-on effects from a leadership’s appeasement of an avowed enemy – regardless of the impetus behind it – will inevitably endanger national security, and to the nth degree.

AND it is this supine behavior which underlined the payment of 400 mil in ransom, despite HUSSEIN’s jive-talk and his surrogate mouthpieces alike. If it looks like a duck….

Republicans have charged that the initial $400 million was nothing more than a “ransom” payment as it coincided with the release of the prisoners, including Washington Post reporter Jason Rezaian. They say the new revelations about the administration’s interest payments are more of the same.

House GOP leaders are putting a new Iran measure from Royce to prevent such cash payments at the top of their to-do list during the four weeks they are back in session before the November election, with a vote expected in the full House this month.

WHICH leads us straight to the continual harassment of U.S. ships from Iran’s fleets, upon orders emanating from Iran’s Supreme Leader, Ali Hosseini Khamenei, the Grand Ayatollah, the terror mastermind of all masterminds!

MIND you, despite all the geo-political hyper-layers – that which underline how the U.S. came from there to here – the fact remains that in relationship to Obama Inc.’s embrace of the world’s largest sponsor of terrorism (alongside Saudi Arabia’s Sunni terror apparatus…but never mind), Americans must internalize the core factor of humiliation. To wit, prostrating the heretofore super power of the world is part and parcel of the entire Iranian/Islamic calculus.

MOST significantly, the internal dynamics of the Middle East are like none other. Effectively, Islamic culture is largely wedded to the concept of “honor and shame”, among other such barbaric underpinnings. So much so, “honor killings” are truly viewed as a badge of honor to cleanse/avenge a family’s name, even if it means killing ones own wife, daughter, or another loved one to reclaim it!

WHICH wends us straight back to the most intrinsic facts of all, that which couldn’t have transpired, sans HUSSEIN’s imprimatur from atop the Free World.

UNEQUIVOCALLY, HUSSEIN Obama’s central goal has always been to bring America to its knees! He has. 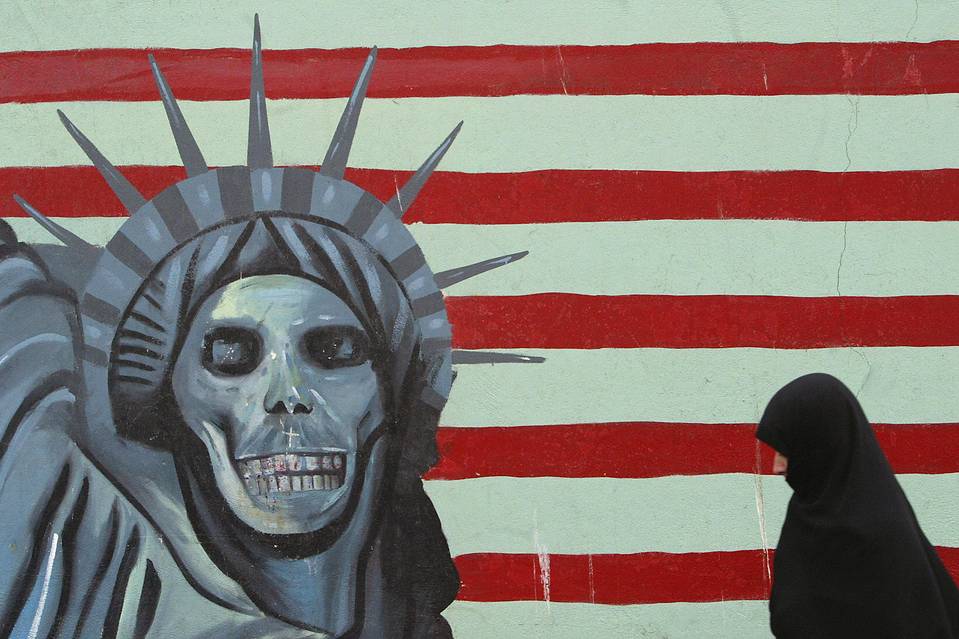