WHILE there is more wrong than right with Europe – especially in relationship to its anti-semitic leadership and self-appointed “elites” – the fact remains that a tipping point has arrived for some of its leaders mainly due to Merkel’s treacherous actions. Indeed, they understand that a “do or die” moment in time has arrived. And while so much more must be done on their parts, some (though hardly all) of the leaders are taking aim, even if to save their own hides – literally!

NOW, it is not as if this site hasn’t shouted from the rooftops that mosques are the most dangerous barracks (read: SS like) and spear heads for terrorism within America and the west overall. Epicenters. In actuality, since this site’s inception in 2012 it has been a central topic at these pages. Hence, the conclusion is clear: The majority of mosques in America must be shuttered or destroyed. Whatever it takes.

BUT the following (June 2015) bears repeating due to the clear and present danger:

AND if anyone knows the inside score, look no further than to a premier counter terror investigator and personal contact, one who has the COMPLETE INSIDE track on what awaits America via said frontal spears: “Dave Gaubatz Warned (Jan. 2014): Mosques, Religiously Garbed Jihadi Indoctrination Camps!”

MOVING right along, in April 2014, this site concluded: “American Mosques Are Priming For Jihadi Training!”

MORE pointedly, the Islamic Society of America (ISNA) is up to their necks in beheading, and they are the major umbrella which houses America’s mosques. Wow.

OH dear…certain mosques are hotter than hot, and that’s why the subject is repeated ad nauseum: “Detroit, Dearborne and Nashville are in the forefront of the assault charge!”

AND so on and so forth…

NOW, it has already been proven ISIS is very deeply embedded in America. So let’s not waste precious time on debating this point. Therefore, it stands to reason that their barracks within, the mosques, are priming to attack. A + B.

IRAQI Shiite cleric Ayad Jamal al-Din, a former member of the Iraqi parliament says that there are thousands of Mosques in America preparing people to join Islamic State.

ONTO France and its “remedial” counter measures…

The French are raiding mosques and not liking what they are finding:  hundreds of war-grade weapons, and large quantities of Kalashnikov ammunition.

French Interior Minister Cazeneuve reported, “In 15 days we have seized one third of the quantity of war-grade weapons that are normally seized in a year.”

The liaison between French imams and the French government has told Aljazeera“according to official figures and our discussions with the interior ministry, between 100 and 160 mosques will be closed.”

Meanwhile, in America, we are being mercilessly lectured to by the Democratic Party that questioning the importation of citizens from a jihadi culture is racist.

How do the Republican candidates approach this threat?  Trump is calling for a moratorium on all Muslim immigrants.  Senator Cruz has introduced legislation designating the Muslim Brotherhood a foreign terrorist organization (which would enable us to deal with many jihadi front groups in America); introduced the Terrorist Refugee Infiltration Prevention Act of 2015, to bar refugees from countries with substantial territory controlled by a foreign terrorist organization; legislation to allow state governorsthe power to bar refugees from their states; and twice introduced the Expatriate Terrorist Act, which bars Americans who join ISIS or other terrorist groups from re-entering the country. Rubio voted against the Musim immigration moratorium bill and has no proposals to limit jihadi refugees.  His Gang of Eight bill would have allowed unlimited Islamic immigrants.

Meanwhile,  Obama is lying about Islam and  harangued us from the pulpit of a jihadimosque in Baltimore last week.  The question arises: either the Democrats really don’t care about exposing and eradicating jihad in America, or Obama’s handlers could not find a big mosque free from jihad.

The problem of jihad in American mosques has been known for decades.  Jihad in America has been spreading and now corrupts many public institutions, especially targeting our children.  Enormous quantities of money are flowing into American universities, textbook companies, and elementary schools, as well as most mosques, to provide teachers, imams and texts that support the jihadi version of history and teach hate of the infidel.  Much of the money is from our ally, Saudi Arabia, so nothing is done.

MORE specifically, in the midst of the above dangers, HUSSEIN Obama’s co-conspirators have been dumping Islamic-fueled “refugees” all over America, and with targeted states in their cross hairs: Conservative towns in remote areas are prime epicenters. Now, why would they do this?

MOST significantly, whereas France is belatedly raiding mosques and seizing caches of weaponry, U.S. leaders are not only allowing the building of additional (mega) mosques under the stewardship of terror-filled Brotherhood Mafia front groups, but the FBI has been instructed that it is against the “law” to monitor them!

A couple of years ago it was reported that Turkey was helping fund the building of a $100 million dollar mega mosque in Lanham, Maryland. In fact Erdogan visited the mosque when he was here in May of 2013, promising to come back for the opening.

Well that time has apparently arrived and now Erdogan and Obama will be together at the mosque for the big opening ceremony:

ANADOLU AGENCY – The presidents of Turkey and the U.S. will open the Turkish-American Culture and Civilization Center in Maryland, Turkey’s foreign minister said Sunday.

Mevlut Cavusoglu, on a three-day visit to Washington, visited the center that also has a middle-sized mosque, and lunched with representatives from the American Muslim community.

“During a phone call, President (Recep Tayyip) Erdogan asked President (Barack) Obama to accompany him in opening the center together and President Obama accepted his offer’in principle,’” Cavusoglu told the representatives.

If Obama’s schedule allows at the time of the opening, he will accompany Erdogan.

The complex is built on a large area and consists of a coffee house, gift shops, cultural center, amphitheater and exhibition hall, computer lab, library, Turkish bath/hamam and guest house.

Cavusoglu said the center has been constructed as a place where all Muslims in the U.S. could come together and worship freely.

He said Muslims have faced increased challenges across the world, particularly due to rising Islamophobia.

“Our duty is to tell the true Islam which is a religion of peace. Islam does not tolerate terrorism. But unfortunately al-Qaeda and Daesh terror groups have tarnished the image of Islam,” he said.

Daesh, also known as Islamic State is neither Islamic nor is a state, he added

CLEAR as a bell.

IN fact, the most effective counter terrorism police task force conceived under Ray Kelly – the prior NYPD Police Commissioner – has been gutted like a fish. Why? This was done under the orders of Bill de Blasio, NYC’s commie Mayor and Islamist supporter! Intrinsically, orders were given (from HUSSEIN Obama) that spying on Muslims suspected of terror ties is no longer “acceptable.” Okey dokey. The FEDS in toto are similarly Islamized.

Better that the NYPD be falsely accused of racial profiling by terrorism-linked Islamists than surrender its duties to protect the country.

THE point being, anyone who believes that the nation’s castrated counter terrorism agencies in America can adequately protect the citizens from the plots hatched – as well as the weapons stored – within mosques and attendant “cultural” centers, well, think of it this way: Would a rational person leave their fate (and that of their loved ones) in the hands of those who have already betrayed them to the maximum degree possible?

ALAS, those who are in agreement with the above analysis must then reach the next level of recognition and stipulate: Well-armed patriots have their work cut out for them. Besides, with the FEDS and locals neutered, who else is going to step up??

YES, most are aware that Washington’s out of control regime is hell bent on disarming citizens from their Second Amendment right to bear arms. While there are many reasons for said thrusts toward gun control, they understand that there is only so much that patriots will bear from Islam’s encroachment. Effectively, they will turn their attention to the Islamists in their midst. No doubt, mosques will (finally) be their central focus. Cross hairs.

THE question remains: Will it be too late before they step up? 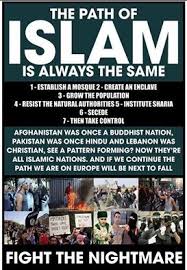 2 thoughts on “Mosques RAIDED/SHUTTERED In France! When Will America’s Patriots Step Up, Since FEDS Are Neutered? Commentary By Adina Kutnicki”