AT the inception of this site (June 2012), the most urgent task was (still is) to educate the readers about Islam and its actual basis, as opposed to the tall tales spun by its multi-layered apologists: Yes, Islam is a “religion of peace.” As is known, the leader of the (heretofore) free world is the leading spinmeister.

RESULTANT, throughout, one can find proof after proof of the most compelling truth of all: Islam is a war-like political ideology, primarily, based upon its prophet’s teachings. Monstrous. 100% provable.

IN this regard, the following warnings were highlighted:

OUT of the gate, in July 2012, Islam and its direct relationship to blood became one of the first analyses. Its paramount importance couldn’t be more stark.

POINTEDLY, as a follow-on, in Aug. 2012, it was noted: What the west in general, and its leaders in particular, knows about Islam can fill less than a thimble. Absolutely.

MORE specifically, in Aug. 2012, another truth was blared: Repeat, until the cows come home, there is NO “moderate” Islam. Period. 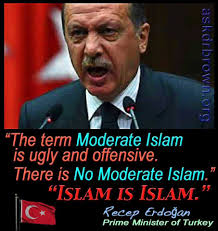 AS such, in Sept. 2012, it was further illustrated: Islam’s blood lust is boundless, yet, western appeasers and apologists supply them with a shield! Clearly, its bloody flow is increasing, hardly dissipating, 3 years onward. Damn them to hell – Islam’s barbarians and their apologists.

ASIDE from many others in between, most recently, in Sept. 2015, the following was front and center: Islam’s barbarism is INHERENT to “prophet” Muhammad, thus, dispelling the “peaceful” lies will save the west! Clear as a bell.

ENTER…Indonesia, the most populous Muslim nation.

BACK in 2002, hardly a lifetime ago, The Economist opined:

Almost all Indonesians are tolerant, moderate Muslims. Yet the government seems strangely reluctant to confront the few dangerous radicals.

THERE is little sign of the tolerant, pluralist face of Indonesian Islam outside the Eksotis night-club in Jakarta. Broken glass, burnt wood and shredded tarpaulin litter the car park—the result of a bombing last weekend by suspected Muslim militants. No one claimed responsibility for that attack, or for two bombs placed outside other night spots that were found and defused. But Islamic vigilantes openly ransack bars and brothels around the country from time to time.

One militant group, Laskar Jihad, sends recruits to fight for the Muslim side whenever religious conflict breaks out in Indonesia’s far-flung provinces. It also enlisted volunteers last year to fight for the Taliban, though it failed to get them to Afghanistan in time. Malaysia and Singapore have accused Indonesia of allowing the leader of a terrorist group with links to al-Qaeda to roam free. Even if, as the government maintains, there is no evidence that Abu Bakar Basyir, the man in question, committed any crime, he certainly advocates violence in the name of religion.

Yet Indonesians insist that their version of Islam is much more peaceful and liberal than that of the Middle East, let alone of al-Qaeda’s zealots. For the most part, they are right. About 90% of Indonesians—some 200m people—are Muslims, yet violent extremists number only a few thousand. At the most recent elections, in 1999, the majority of votes went to secular parties.

The religious parties that did best advocated consideration for minorities; one that called for the introduction of Islamic law polled a miserable 1.7%. Two huge Muslim organisations, Nahdlatul Ulama and Muhammadiyah, which together claim more than 60m members, earlier this year agreed to join forces to fight religious extremism. A politician from Aceh, reputedly the most devout province, recounts that locals booed Jaafar Umar Thalib, the leader of Laskar Jihad, during a recent speech in the provincial capital.

Yet, given how little support extremists enjoy, the government seems strangely reluctant to take them to task. Laskar Jihad (along with separatist Christian groups) had spent three years fanning sectarian fighting in the Moluccas before the government arrested Mr Thalib in May for incitement. One of his first visitors in prison was Hamzah Haz, the vice-president and head of Indonesia’s biggest Islamic party. A few weeks later, Mr Haz also dropped in on Mr Basyir. Though most politicians do not go so far, many are unwilling to condemn Islamic extremism loudly and openly.

This reticence stems in part from the unrelated causes with which extremists have dressed up their brand of Islam. It has become a point of national pride, for example, not to give in to foreigners’ haughty demands for Mr Basyir’s arrest. America’s foreign policy is unpopular, and any gesture that smacks of defiance of it correspondingly popular. Many Muslim Indonesians sympathise with the plight of their brethren in the Moluccas, and associate Laskar Jihad with their cause. They are also fed up with the country’s abject lawlessness and corruption, and support any moves to restore some sort of order. Several of the radicals first rose to prominence by resisting the authoritarian regime of Suharto, a former president, and still retain a certain dissident glamour.

Fear of being labelled bad Muslims also plays a part in the government’s timidity. According to Ulil Abshar Abdalla, head of the Islamic Liberals Network, “all the politicians in the country think that Islam is a monster—but if you go against it you risk your career.”

Megawati Sukarnoputri, the country’s president, seems particularly sensitive about her Islamic credentials. She has been denounced for visiting Hindu temples, for consorting with Christian America, and for being a female leader in a Muslim society (by her own vice-president, Mr Haz, among others). The arrest of Mr Thalib shows that she is growing more confident, but the lack of any significant protests about her action also suggests that she had nothing to worry about anyway.

Above all, Indonesia’s politicians are not very good at standing up to anyone, from Muslim extremists to debt defaulters. The memory of Suharto’s repression remains so strong that public figures hesitate to marginalise anyone, for fear of appearing anti-democratic. In any case, many Indonesians find direct confrontation distasteful. The president recently chided Indonesia’s parliament for taking decisions by voting, instead of through consensus. Pluralism, surely, to a fault.

READERS, is the above Allah-wash resonating, no less, from a major western media outlet? However, The Economist is clearly accompanied by others in its soft-pedaled approach to Islam. Regardless of the barbarism, Muslim nations are given a pass. Incontestably, such is the case within a mostly bought and paid for corporate media. Mind you, there is little representing the inherent truth regarding Islam – at its core – within a majority-held Islamic nation, as painted from the onset at The Economist: “Almost all Indonesians are tolerant, moderate Muslims. Yet the government seems strangely reluctant to confront the few dangerous radicals.There is little sign of the tolerant, pluralist face of Indonesian Islam…” blah, blah…..

ALAS, fast forward to 2015 (a mere 13 years onward, barely a blip on the historical radar) and view – if you dare – for yourselves how quickly the so-called “tolerant” and “moderate” Muslims in Indonesia turned into Islam’s Shariah Law driven barbarians:

Recently, sharia law (Islamic Law according to al-qur’an) was implemented and is now being enforced.

‘Sharia Police’ have now succeeded in bringing 50% of the population into submission beneath the other 50%.

Take a journey into the dark, destitute world of Islam and witness 50% of the Indonesian population, now enslaved.

RESULTANT, each and every time the Liar-in-Chief (and surrogates) opines, “Islam is a religion of peace,” he sets back the ability of Americans (westerners) to defend themselves against Islam’s onslaught. He is Islam’s shield and sword.

SO what’s to be done? Simply put, the process of educating the public with facts on the ground should comprise one tip of the western spear. However, it will come to naught, if concerted action isn’t accompanied.

IN other words, while Islam’s barbarians lay Christianity to waste wherever their imperial conquest swathes, and as Arabs/Muslims in Israel slaughter Jews in their religious “holy” conquest, Americans (westerners) must confront the heart of the incitement; Islam’s barracks, its mosques.

CONSIDER the above as this generation’s “call to arms”, whatever part one can partake. The sidelines? Non-optional. But for the fact that Allah’s monsters are a mirror image of Hitler’s – in so far that all deemed “impure” meet the same (eventual) fate of death – therefore, what else is there to ponder?

STILL yet, questions, anyone?

(Hitler-like, ISIS executes 100’s of Iraqi POW’s and dumps their bodies in a ditch. It is no coincidence that Mein Kamph is the second most popular book after the Qur’an in the Islamic world.)