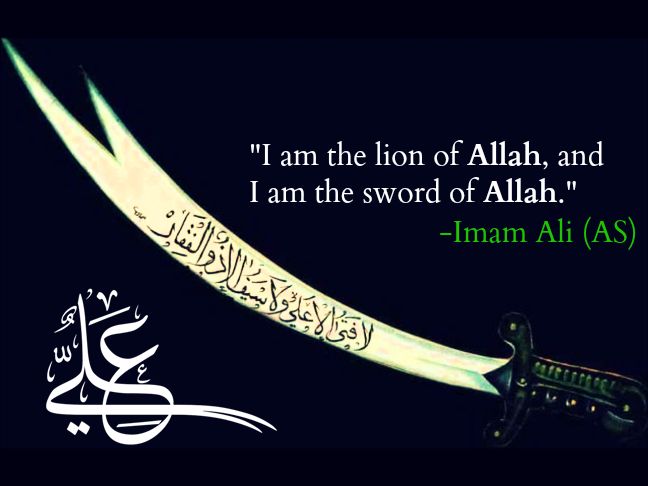 IN order to fully internalize wherein lies the mortal danger to the west via “the sword of Allah” – as authoritatively prescribed by Imam Ali, the cousin and son-in-law of Muhammad, the last prophet of Islam – it is imperative to understand Islam’s basis, that is, Sharia Law. In other words, without its immutable laws and dictates, know that Islam would – inevitably and eventually – cease to exist. No doubt.

Shari’a tries to describe in detail all possible human acts, dividing them into permitted (halal) and prohibited (haram). It subdivides them into various degrees of good or evil such as obligatory, recommended, neutral, objectionable or forbidden. This vast compendium of rules regulates all matters of devotional life, worship, ritual purity, marriage and inheritance, criminal offenses, commerce and personal conduct. It also regulates the governing of the Islamic state and its relations to non-Muslims within the state as well as to enemies outside the state. Shari’a influences the behavior and worldview of most Muslims, even in secular states where it forms no part of the law of the land.

Islam teaches that shari’a, as God’s revealed law, perfect and eternal, is binding on individuals, society and state in all its details. By logical extension, any criticism of shari’a is heresy. Muslims who deny the validity of shari’a in any way are labeled as non-Muslims (infidels) or apostates (those who convert to another religion) by traditionalists and Islamists. As such, they face the threat of being prosecuted for apostasy, a crime that carries the death penalty in shari’a…….The death penalty for apostasy relies at the core of it on an authentically verified Hadith from Prophet Muhammad who said, “Whoever changes his religion kill him.”

EVEN more so, Sharia’s barbaric-laced laws are hardly reserved for Islamic nations, in so far that the entire ummah (collective community of Islamic people) is bound by its dictates, regardless of locale. Most ominously, its insidious thrust creeps through western society via what is known as stealth jihad – which happens to be an expertise within. CAIR–like.

BUT before anything else, westerners must stop viewing Islam through a liberal based (and exotic, multi-cultural tainted) prism – ala a value system which embraces democratic principles and attendant underpinnings. Period.

IN this respect, whereas western civilization – which is underpinned by Christianity and Judaism – in theory, upholds a clear demarcation between Church and State, such is not the case with Islam.

MORE specifically, the deceptive counter-argument that Christianity’s religious texts resonate violence too, well, that is little more than an Islamic, anti-western smokescreen. Inextricably, Christianity has long since abandoned its violent texts – again, not so with Islam. Not only that, if one renounces any part of the Quran and its associated Hadiths, ipso facto, one is no longer considered a “true/pure” Muslim. As indicated above, said adherents become targets too. Islam is violent at its core – Islam and Blood. Inextricable.

RESULTANT, if western civilization (or of what’s left of it) intends to survive, Islamic Law a/k/a Sharia Law must be considered a cancerous scourge, hence, never to be given quarter within America in specific and the west in general.

ALAS, as the above link (akin to countless others within these pages) documents in gory detail, indeed, Sharia Law operates within American institutions and the west at large – albeit, countless still haven’t a clue!

STEALTH by stealth, even US banking institutions have jumped on board the Sharia bandwagon, regardless of the fact that Jihad is fueled through Sharia financing! You got that?

In the United States a quiet financial revolution is going on under the radar of the public eye. It’s the rise of Islamic financial institutions — ranging from small community banks in the Midwest to nationwide investment banks and brokerage firms…..continue here….if your nerves can take it….

NOW, before the latest infiltration and penetration of Sharia Law (see below) becomes an indelible marking point within America, know that this intrusion is particularly ominous – in that it is aided and abetted by New York City’s Comrade DeBlasio and the NYPD’s henchmen under his wings, William Bratton (2014-2016) and James O’Neill. In other words, since they serve at the “pleasure” of the Mayor, they must follow his lead! Intrinsically, coddling Muhammadans is a top priority, as he demonstrated when clipping the wings of former Commissioner Kelly’s vaunted “NYPD Counterterrorism Bureau.”

AGAIN, the NYPD is a highly familiar terrain. Yes, hardly, a “Johnny-come-lately.”

Ever since 9/11/01, Americans (as well as most of the Western world) are coming to a terrified conclusion: that their home front is precipitously vulnerable to Islamic terror attacks. As Islamic jihadists literally explode all over the globe, most have felt a wide range of emotions, swinging from fear to outrage, while searching for answers to questions like why are they targeting us? and what do they want? At the same time, few have been able to escape the welling feeling of hopelessness, wondering if their countries will ever be able to beat back the seemingly never-ending onslaught from Islamic jihadists.
Leave it to the out-of-the-box thinking of the head of the NYPD (New York Police Department) to come to the rescue, at least as far as securing New York City, to a degree unprecedented in law enforcement. To this end, after witnessing the horrific attacks of 9/11/01, Police Commissioner Ray Kelly decided to take the offensive, not satisfied to leave New York City’s counter-terror activities to the Feds. He (rightfully) concluded that sharing intelligence was not their strong suit, as layers of obstacles exist between the many competing agencies. Commissioner Kelly instinctively realized that time was of the essence and that he had to act. And act he did.
Therefore, he put into effect New York City’s first ever Counter Terror Unit, operating both inside New York City and outside its borders. In a particularly brilliant strategic move, he also decided to station several of New York City’s best detectives at overseas posts, sites chosen based on their levels of Islamic terror activity…..continue here….

The New York Police Department (NYPD) has been ordered by the Mayor to actively start recruiting and hiring more Muslims, a LOT more. Right now, there are about 800 (too many) Muslim uniformed police officers out of about 35,000. Of those, only about 20 are higher-ranked officials. (Gee, I can’t imagine why)

BACK to the aforementioned “new” infiltration and penetration……

These Muslim patrol volunteers are reportedly self-funded and ‘unarmed.’

“Not at all comfortable with this….This looks like Sharia Police in Brooklyn,” former NYPD officer John Cardillo said this week.

While this story isn’t new to those paying attention to Rebel Media’s or Laura Loomer’s recent reporting, the Muslims in Brooklyn have become emboldened and are now expanding their fleet of patrol cars and adding more patrol officers this month.

According to the New York Times, Maeen Ali, who came to the US from Yemen in 1990 set up the Muslim Community Patrol after fearing for his children’s safety after he saw ‘anti-Muslim’ hate online.

“That just boiled inside of me,” said Mr. Ali, 38, told The New York Times. “That’s when I said to myself that it was really important to come out and protect Muslims in the community.”

Maeen Ali is one of 30 people of the all-volunteer  Muslim Community Patrol with a goal of expanding the fleet of patrol cars from 2 to 5 by the end of the month.

The New York Times reported that the Muslim community received a huge backlash after photos of the Muslim Community Patrol cars went viral on social media.

A flurry of phone calls flooded the 68th precinct which led police officials to hold an introductory meeting with Muslim Community Patrol members to discuss parameters: Call 911 if they encounter something suspicious, and take no enforcement action on their own. “We expect them to follow the law in general,” a Police Department spokesman said.

Muslim Community Patrol members claim they will not act as police officers, they just want to work in concert with police.

The Muslim Community Patrol in Brooklyn is reminiscent of the Sharia police in London where the Muslims enforce Sharia law in neighborhoods by harassing gays, targeting people who drink alcohol and telling women in mini skirts to cover up.

Had enough yet, America?

TO wit, if “Sharia Police” (and they are!!) weren’t enforcing the “law” in Brooklyn, mind you, while riding in cruisers that completely resemble the NYPD’s fleet, well that would have been the shocker!

MARK THESE WORDS, as repeatedly warned at this site, as well as at other accessible megaphones: what starts “across the pond” always crosses into America and leaps throughout the west. Catastrophically.

INCONTESTABLY, a pic is worth (more than) a thousand words, as this one in the Brooklyn ‘hood (tragically, but predictably) illustrates!