WHILE it is patently clear that Israel wields the mightiest and most advanced  military force in the region, on the other hand, it is painfully obvious that it hasn’t won a decisive victory, ever since its stunning win in the Six-Day War in June 1967. Indisputably, it was the “mother of all wars”; one which has been studied and examined by the U.S. Navy War College as an exemplary template, irrespective of force size. Its basis, Israeli Operational Art: The Six Day War, can be found here.

SIMPLY put, the Arab world (others alike) will not accept its massive defeat. And, even more so, its humiliation; that which an honor-shame culture is incapable of recovering from. So the very fact that tiny Israel (Jews, no less) was victorious over Egypt, Jordan, and Syria (and had the “audacity” to capture the Sinai Peninsula, the Gaza Strip, the so-called “West Bank” – in actuality, its historical and Biblical heartland, Judea & Samaria – and the Golan Heights), well, the rest is history, so to speak. Intifada after intifada, outright war after war (with the Yom Kippur War in 1973 as their mega “response”) has never waned. Ceased.

MOST significantly, even after the initial losses via a sneak attack from multiple Arab armies, once again, the IDF managed to turn the tide – only to accede to a Russian and U.S. cease-fire to determine the outcome! Vassal state, anyone?

The beginning of the war was completely disastrous for Israel. On the second day they tried to counterattack in the Sinai, but their tanks were decimated.

Nevertheless, unbelievably the Israelis gradually turned the tide of battle. First, they did so against Syria. The Israelis not only pushed them off of their gains but further back than when they had begun – to within 14 miles of Damascus.

Then the Israelis stabilized the line in the Sinai, primarily because after the Egyptians made their gains they chose not to continue on the offensive. Then Ariel Sharon mounted an incredible historic counterattack to cross the Suez to the Egyptian side. Through the fiercest fighting the Israelis laid a pontoon bridge and got their tank corps across it. Now there was nothing between them and Cairo. Furthermore, they now encircled the main Egyptian army, the Third Army, threatening to totally destroy it.

At this point, Russia intervened by inviting American foreign minister Henry Kissinger to the negotiating table. Russia and the United States forced a disengagement agreement.

ALAS, fast forward nine years to 1982, and to more of the same. After repeated cross-border attacks by the PLO burrowed inside Lebanon, the Lebanon War, aka the First Lebanon War, erupted. After a well-worn method of “attrition warfare” with Fatah’s (Abul Nidal Organization) onslaught taking the lead, the IDF was finally released from its leash. Hmm.

The final provocation occurred in June 1982 when a Palestinian terrorist group led by Abu Nidal attempted to assassinate Israel’s Ambassador to Great Britain, Shlomo Argov. The IDF subsequently attacked Lebanon again on June 4-5, 1982. The PLO responded with a massive artillery and mortar attack on the Israeli population of the Galilee. On June 6, the IDF moved into Lebanon to drive out the terrorists in “Operation Peace for Galilee.”

AS always, par for the leadership’s record, another cease-fire took place – and it was hardly worth the paper it was written on! But for the fact that they failed to internalize what the IDF’s hasty retreat from Lebanon in 2000 – without a clear-cut victory – would lead to, know that, in and of itself, it constituted a grave dereliction of duty. Without a shadow of a doubt, it enabled Iran’s proxy forces to enter the vacuum. In fact, Hezbollah would hardly be a major threat to Israel, if not for the above. 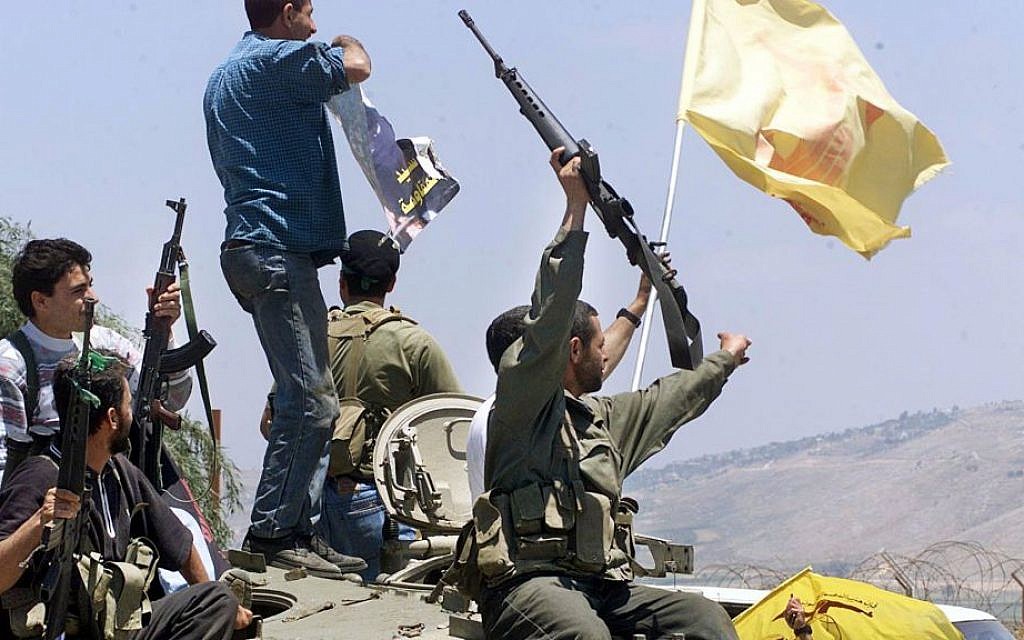 (Hezbollah fighters celebrating on the day the IDF left South Lebanon, May 24, 2000.)

Standing before the microphone, looking like he was delivering a eulogy, Shaul Mofaz, the commander of the Israeli army on May 24, 2000, told the citizens of Israel that after 15 years in the Security Zone in South Lebanon, the IDF had withdrawn. He called the move “historic.” He said the “boys had been brought back home.” There was no mention of victory….continue reading….

MORE specifically, Israel’s political hierarchy (smarties that they think they are) failed to learn the most salient lesson of all from the resounding military success of 1967 – victory, at all costs! Effectively, from thereon in, cease-fires + the Orwellian concept of “havlaga” (הבלגה), aka “restraint is strength”, has become the leadership’s “strategic” goal. Said charge can be discerned within numerous analyses and interviews – most of which took place from 2012 to date. They can be found here, here, here, here, and so on and so forth. In other words, little has changed in the leadership’s “thinking” – such that it is!

After 20 rockets were fired from the Gaza Strip in the three weeks since Dec. 7, 2017 limited punitive IDF air strikes, which never stopped them before, are still not working.

The identity of the hand orchestrating the rocket campaign depends on whom you ask. Defense Minister Avigdor Lieberman attributes it to “infighting among the Gaza Strip’s rival terrorist groups,” although he holds Hamas accountable for failing to prevent it. The IDF spokesperson issued a statement on Monday, Dec. 18, 2017 listing 40 IDF retaliatory strikes against Hamas terrorist targets: “Hamas is exclusively responsible for the situation in the Gaza Strip. The IDF views the firing of rockets at Israeli communities with the utmost gravity and will not allow any harm or attempt to harm the citizens of the State of Israel.”

Hollow words indeed so long as no effective action is taken for putting a stop to the bane.  Meanwhile, hundreds of thousands of Israeli civilians, including many thousands of children, live in fear of their lives.

Some of Israel’s mainstream media join in Lieberman’s game of obfuscation for absolving Hamas of keeping its hand on the button for releasing the rocket barrage. One headline proclaimed: “Hamas tortures Salafis to curb Gaza rocket fire,” and sends messages to Israel that “it does not seek escalation.”

Hamas may well be torturing Salafis, but DEBKAfile’s military sources assert this has nothing to do with the rockets launched almost daily from the Gaza Strip. It is the supreme command of Hamas’ armed wing, the Ezz e-din Qassam Brigades, which is directly responsible – not small factions or other terrorist groups. The commanders of the radical Islamist group are motivated by burning resentment of their political leaders’ compliance with Cairo’s drive for reconciliation between the Palestinian Authority led by Fatah and the Hamas rulers of the Gaza Strip. Hamas terror chiefs have no intention of handing Gaza’s border crossings with Israel and Egypt to the control of PA security forces, or of accepting a permanent mission in Gaza City of generals from the Egyptian intelligence ministry.

Hamas is venting its resentment typically by goading Israel with an as-yet measured barrage of rockets, taking advantage of the wave of Islamic protest generated by US President Trump’s recognition of Jerusalem as Israel’s capital. The order coming down from the Hamas high command is to its allow any group, including its own activists, to shoot rockets into Israel. The level of fire must not be allowed to get out of hand; neither is it stopped or the launchers impounded. This keeps the barrage irregular and spasmodic – yet controlled, a bane for Israelis living within range, who are trying to carry on with their lives. Hamas is fully capable of stopping it, if it so wishes, but Israel is so far avoiding outright action for making this happen.

IN this regard, the more things change, the more they stay the same – at least within Israel’s political machine, regardless of political party. Inestimably, vote right, get left – this is the paradox of Israeli politics.

RESULTANT, it has never been (and never will be) little more than a fairy tale….a pipe dream….a flying pig moment….that rocket fire from Hamas-controlled territory would cease after countless cease-fires. Therefore, why are Israel’s leaders making the same “strategic” errors? Inestimably, all is not as it seems.

BUT even as we wend further down the rabbit hole, it behooves bearing the following in mind: If not for the fact that the late PM Sharon “gifted” to Israel’s tormentors the Gaza Strip, aka Gush Katif, their missiles/rockets/tunnels would not be threatening Israel to even an iota of the degree that is currently tormenting Israel’s southern citizens.

YES, it was the so-called “Disengagement” in 2005 – more aptly, the wholesale destruction of thriving Jewish communities within Gush Katif – which will go down in the annals of Israel’s modern history as the biggest crime against the majority Zionist public, not to mention its strategically disastrous knock-on effects! Rest assured, this craven act of appeasement could not have come to pass without the abandonment of victory as a strategic imperative, and with cease-fires atop “havlaga” supplanted in its stead. Indeed, what is taking place today from the terrorist enclave is an inextricable consequence of the “Bitter Fruits of Disengagement.”

IN every respect and in real-world terms, above are the direct knock-on effects of appeasement; a triad of wreckage – physical, moral, and spiritual. To wit, Israel’s leaders managed to turn brother against brother and sister against sister through psychological brainwashing – ‘The Mental Preparation for the Disengagement
And its Aftermath in the IDF’!! Read it to believe it.

SO the real crux is: Now that the reader (especially, through clicking on various evidentiary-filled links cited throughout) understands what’s what, it becomes clear that Israel’s leaders are not only wildly derelict, but accede to “attrition warfare” as the “fate” of the nation, paradoxically, the price to be paid for its survival. Indeed, they are “tired of fighting….tired of winning….”

Israel has repeatedly sent out warnings that Hizballah would not be permitted to come near its Golan border, yet the IDF did not raise a finger to save Mahar Al-Mir. Since its fall, the rebel chiefs offered to retreat from the enclave without a fight. This development, our military sources stress, would bring Syrian and Hizballah troops right up to the Syrian-Israel borderline running through the Hermon foothills up to northern Golan…..

THUS, by extrapolation, they have abandoned victory as a strategic goal. Hence, their legitimacy to lead the nation deserves to be displayed for what it is, come what may.

{re-blogged at TheHomelandSecurityNetwork} click on “Archives, dated Dec. 23, 2017 to read

4 thoughts on “Israel’s High Command & Their (Derelict) Acquiescence To Attrition Warfare. How Did It Happen? Commentary By Adina Kutnicki”