THOUGH much of what went down in Redlands ala “Allah’s Muslim Terrorists” is still sketchy and will take considerable heavy-lifting to sift through, the fact remains that certain corroborating info is coming to the fore. Now, though a smattering is leaking into the public domain, the more important details are being “gifted” via counter-terrorism experts and their “boots on the ground” analysis. These insights dare not be confused with the dribble offered up by (mostly) clueless pundits and so-called talking bobble heads, including the outright balderdash spewed by HUSSEIN Obama!

IN this regard, this investigative journalist has been working overtime to alert the public to militant jihadi dangers that lie ahead. Much of its basis has been developed over the last decade, though some wends back to 2002. In other words, said analysis is hardly Johnny-Come-Lately, never mind being reactive to whatever latest Islamic barbarism lights up the headlines. Rather, it includes analyses gleaned from deeply sourced professionals, despite very fluid moving parts. In tandem, a confluence of geo-political forces are studied and analyzed, in combination with a full knowledge base of Mid East jihadi tactics. Said matters are then carefully assessed through the eyes of aforementioned “boots on the ground.”

LESSON LEARNED: Even when anonymity is required, always give credit where credit is due.

BE that as it may, while a particular contact is primarily highlighted at this site (and for good reason), it is also the case that others (again, who choose to remain anonymous) have equally chimed in. Resultant, when they independently arrive at highly similar prognostications, well, then, and only then, it becomes time to alert the public.

STILL yet, before we deconstruct some of the developed intel re San Bernardino’s “Allah’s Muslim Terrorists”, the following on target excerpt from “Americans: IED’s & Dirty Bombs Coming Your Way” (June, 30, 2014) is an urgent read or re-read, whatever the case:

COUNTLESS Americans (and other westerners) have buried the (mental) carnage from 9/11/01, preferring to believe it was a one-off. Undoubtedly, it is totally understandable to react this way. Moreover, it’s just too damn depressing for many to relive the jihadi “bolt out of the blue” attack, even though their previous attempt, in 1993, should have raised mega alarm bells. Regardless, despite the pit in one’s gut, it is a deadly mistake to forget 9/11/01, as well as to forgive the murderous ideology which underlines every Islamic attack, bar none. Besides, wishing doesn’t make it so.

IN this regard, there are those – who (mostly) operate behind the scenes, in tandem with others in alternative media – who refuse to let the subject die. Thank heavens. And a grounding in the geo-political landscape assists in said matters, internalizing which way the jihadi winds are blowing. Folks, “it be” westward, with America their primary target, and Israel as their knock-on, next door, prize.

THOUGH Islamists continue to lay waste all over the globe, the fact of the matter is that jihadi blow back – ever since 9/11/01- against American civilian targets – up until Boston’s jihad – remained out of their reach. However, American army bases suffered multiple attacks from Muslim-American foot soldiers, even though they were “hiding in plain sight.” Simply put, jihadists are embedded all over the U.S.landscape, and throughout the west alike.

MOVING right along, almost 13 years after the most horrific terror attacks on America since Pearl Harbor, ISIS, Al Qaeda’s offshoot, march on, blowing up everything and everyone in its wake. The point being, does anyone in their rational mind believe that Americans, Israelis, and the west in general will escape their cross hairs, as exhorted by their mouthpieces on multiple occasions? Stipulated, ignore them at your peril! Oh, and flush down the toilet Barack HUSSEIN Obama’s lying rhetoric: Al Qaeda/ISIS is on the run!! ……

ON the other hand, Al Qaeda’s spawn, ISIS, has other ideas….ISIS Plans To Smash Borders Of Mideast Map….and this blow back will, no doubt, have knock-on effects on America and Israel.

The Islamist organization which has overrun large areas of Iraq and Syria declared itself an Islamic caliphate and proclaimed its leader Abu Bakr al-Baghdadi “imam and Khalifa for Muslims everywhere,” ISIS spokesman Muhammad al-Adnani said in a statement Sunday night. The statement was posted on Islamist websites and Twitter in several languages.

ENTER: Patriot extraordinaire…premiere counter terror expert too…warning Americans what’s in the offing! “IED Explosives Coming to an American Road Near You” By: Dave Gaubatz, June 2014…continue reading….
NOW that that’s settled, let’s clear the air even further: No one with any credible experience in counter-terrorism believes that Redland’s terror duo erupted spontaneously, or without domestic AND foreign backing. Along said trajectory, the open question becomes: Who were their DIRECT handlers and concomitant support networks inside America? Yes, while some names/groups keep cropping up in this direction, well, until it is a “done deal” the advice given is consistent: Stay quiet! Understood.
EVEN so, certain core hallmarks must be discussed, therefore, a heads up was given to place them in the public domain: As such, the following bullet points take center stage:
TO wit, as reported on Aug. 13, 2015 (almost 4 months before Redlands exploded into the spotlight), the following analysis and prognostication should be kept uppermost in mind: “ISIS Tests U.S. Defenses Inside America; Mexico Major Springboard. Hussein Obama Unfazed.”
OH, not to be remiss, mega boosts are given to “Allah’s Muslim Terrorists” via narco-terrorists on the southern border, as well as from cartels throughout Latin America. Thus, keep a WATCHFUL eye on the power grids, starting with California’s. Just sayin’….
SO, as we finally segue to Farook and his jihadi wife’s onslaught, think in terms of particular signatures and hallmarks, and ask yourselves: Isn’t it obvious why they primed bombs to blow, even though they mercifully screwed this part up?

MOST alarmingly, to bring matters full circle and into a laser sharp lens, one of the main tactics of Mid East jihadists is to deploy cells in precisely the same manner. For decades on end, militant jihadists inside Israel – more often than not – stage one attack, while another cell is poised to strike at first responders. Force multipliers.

This past year (2015), Israel’s Fire and Rescue Authority as well as Magen David Adom have often been attacked by Palestinian terrorists when responding to incidents in the Judea and Samaria area as well as in the country’s capital.

Israel’s Fire and Rescue Authority, which is tasked with providing firefighting services and rescue in Judea and Samaria to Jewish and Palestinian populations, are frequently targeted by Palestinian attackers. Magen David Adom, part of the International Federation of Red Cross and Red Crescent Societies, is also a popular target.

Ironically, on a daily basis, both emergency services provide aid and treat the residents of the Palestinian villages that are home to those attackers.

Just last week, on Monday, September 21, an Israeli firefighter’s support vehicle, was attacked on Route 443 near Jerusalem, when rocks were hurled at his vehicle, causing extensive damage. The firefighter himself had to be rescued.

On Saturday night, September 19, four squads of Israel’s Fire and Rescue Authority were called in to extinguish a large-scale fire on the outskirts of Jerusalem near the Palestinian village of Anata. While battling the flames, the firefighters were attacked by Molotov cocktails thrown by local Palestinian men which only aggravated the open fire and put the firefighters’ lives at risk.

These events join a long reoccurring phenomenon of terrorism and violence directed at Israeli emergency response services, the same authorities that are tasked with saving all lives, under any circumstances in all areas of the country.

BASICALLY, there is no getting around it: Whether Farook was directly schooled by foreign hands (there is enough evidence to back up that the jihadi duo spent time in Saudi Arabia, and likely in other Islamic-infested nations) or not, “Allah’s Muslim terrorists” inside America are equally endowed with tried and true signature attack modes, and with roadside bombs/IED’s chief among their methods.

NOT only that, but with tens of thousands of additional “refugees” due to stream into the nation, exactly how many are steeped in the above “probings” and jihadi signatures??

IF anything, Americans must prepare themselves for what Israeli Zionists have been facing for decades; “Mop ups” of one bloody scene after another, all “credit” due to the very same “Allah’s Muslim Terrorists!” 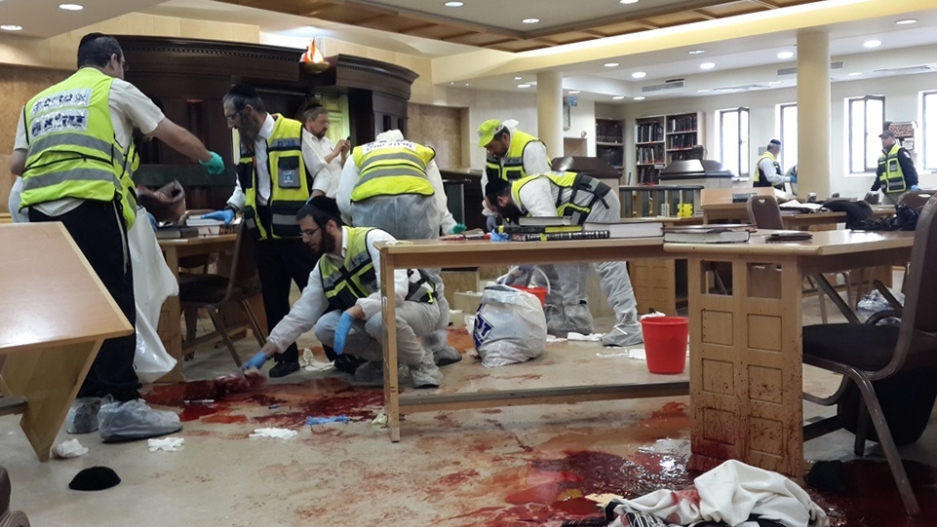