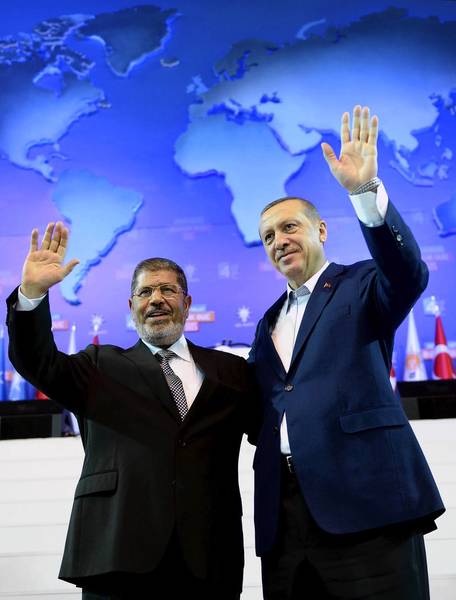 TWO blood-soaked Brotherhood Mafia leaders…though one is now in prison due to Egypt’s crack down…the other, well, he goes from Islamist strength to strength…from PM to Prez…gunning to become the new Caliph!

WITHIN the law of averages, two of Barack HUSSEIN Obama’s best buds – inside the Mid East’s Brotherhood Mafia – are scoring 50-50. One is still a “strong horse”, while the other has allies as stand ins. Sh-t happens. Regardless of who is up and who is down their end goal – Obama Inc. and assorted Islamic players – remains the same. Firmly implanted. No wishy-washy finger in the air fence-sitting.

RESULTANT, when Benghazigate blew up, this investigative reporter honed in on the Islamist-in-Chief’s cooperation with Egypt’s Brotherhood – in tandem with Turkey’s “behind the scenes” assists – in order to clear a path for the Blind (terror) Sheikh’s release, as well as pave the way for the Caliphate’s swathe via the most extensive weapons running in Mid East history. Never forget this.

Yes, readers surely recall the insane concoction from Obama Inc’s mouthpieces: the video made the jihadis kill Americans in Benghazi…as believable as “the dog ate the homework” fib, yet this was no grade school tall tale. But once the above lie lost its legs, tidbits of truth started seeping through.

Let us recap some of the essential charges, and then the reader will understand why Obama’s Muslim Brotherhood Mafia are the main culprits, of which Al Qaeda is an offshoot. The lessons learned will then illuminate the trail, highlighting why he has fought so hard to protect his Brothers from the long-arm of (what was once) American justice.

Enter the Blind Sheikh…and the Egyptian Brotherhood’s die hard push to release him from U.S. imprisonment. Mind you, this terrorist is so important to their pyramid that he was also front and center at this American-Israeli’s op-ed, “The Opening of Jihad On U.S. Soil“, written back in November 2005. Most recently, he made an “appearance” at this site in The Impending Release Of The Blood Soaked Terror Sheikh. An important fella indeed. A superstar.

Significantly, the Brotherhood Mafia (regardless of their address, be it Egypt, Syria or any other Islamic nation world over, including Washington’s power centers !) is so tightly woven into Obama Inc.’s DNA, as punishment for El-Sisi’s deposing Morsi, he ordered the cut off of Washington’s financial spigot to Egypt to be dependent upon the re-installment of the Brotherhood to power ! What?

NOW, while each Islamic leader has their own preference, as to who shall lead their reconstituted hegemony, the fact of the matter is they are ALL in agreement with its “inevitable” re-birth. Not only that, but a number one priority for most Muslims – across the world – is this same goal. This is one main reason – out of countless Sharia law dictates – why Muslims cannot truly integrate into non-Muslim lands. They are Allah-set on Islamizing the world for the benefit of their pagan via the Caliphate.

As anti-government protests continue brewing in Egypt, opposition groups such as the banned Muslim Brotherhood are gaining steam and popularity among disillusioned Egyptians bent on ousting President Hosni Mubarak from office. But excerpts of a 1995 book written by the Muslim Brotherhood’s fifth leader and translated by Palestinian Media Watch are lending a disturbing look at the group’s views and stated mission.

“Jihad is the Way” is the last of a five-volume work, “The Laws of Da’wa,” written by Mustafa Mashhur, the reported leader of the Muslim Brotherhood in Egypt from 1996 until 2002. The Jerusalem Post reports that excerpts from the book detail the Brotherhood’s objectives, including the “global conquest of Islam” and “reestablishing the Islamic Caliphate, the “public and private duties of jihad” and the “struggles Muslims must wage against Israel.”

“The Islamic ummah,” [the book] says, referring to the supranational community of Muslims, “can regain its power and be liberated and assume its rightful position which was intended by Allah, as the most exalted nation among men, as the leaders of humanity.”

Elsewhere, it exhorts Muslims, “Know your status, and believe firmly that you are the masters of the world, even if your enemies desire your degradation.”

MORE specifically, Muslims in America, whether immigrants or not, are absolutely on board the Caliphate train. Dangerously so. Its considered to be a sine qua non, even Mohamed Elibiary, the Islamic fox in DHS, is OPEN about it!

ALAS, as more and more dirt is uncovered re Benghazigate, this site’s prior analyses – having already revealed the Brotherhood Mafia’s “circle of death” – are coming full square, in a manner of speaking. Many other sites are finally catching on….

The attack took place less than two months before the November 2012 presidential election. Klein notes Obama could have found himself in a political quandary if it were determined the Muslim Brotherhood had been involved in the Benghazi attack in any way.

After the U.S. president called for the resignation of Egypt’s long-time secular leader, Hosni Mubarak, Obama helped to support the election of the Brotherhood’s Mohamed Morsi and then proceeded to open ties to Morsi’s group.

The possible involvement of Egypt could be central to understanding the motivation of some of the attackers. The attack could be linked to Morsi’s campaign to free the so-called blind sheik, Omar Abdel-Rahman, who is serving a life sentence in the U.S. for conspiracy in the 1993 World Trade Center bombing. Rahman’s release was a central foreign policy issue for Morsi.

In July 2013, several major Arabic newspapers ran with a story, first reported by the Kuwaiti paper Al Rai, quoting a Libyan intelligence report on the Benghazi attack that mentions an alleged connection to Morsi and other prominent Egyptian figures.

The report, prepared by Mahmoud Ibrahim Sharif, director of national security for Libya, was based on purported confessions of some of the jihadists arrested at the scene.

INDEED, as indicated from the onset, Turkey (and Qatar) are up to their eyeballs in all of the above, and ISIS are now the main beneficiaries. Again, all roads lead back to Barack HUSSEIN Obama.

MOREOVER, is it any wonder that Turkey is eager to host the Muslim Brotherhood’s leadership, as they depart from Qatar to ease certain internal pressures? Of course not. Erdogan is a major patron, as is the Jihadi-in-Chief!

TRENCHANTLY, this site knew that Hill & Co. (& her real significant other, Huma Abedin…though young enough to be her daughter, but never mind said sordid details) were up to their necks in Brotherhood designs, and none of this was news on this end. Nevertheless, she is now being fingered (by an “in the know” subordinate) for her DIRECT scrubbing of all Benghazigate footprints, those leading back in her direction.

AS is said, curious and curiouser. Hmm…again, connected the dots long before others.

FOR the umpteenth time…presenting, Sen McCain, the dangerous codger who never met a Brotherhood jihadi he didn’t support…up close and personal with an ISIS terrorist! Essentially, no diff between Demsters and RINO’s…none at all….