Obama told me he is still a Muslim, who supports the Muslim agenda. 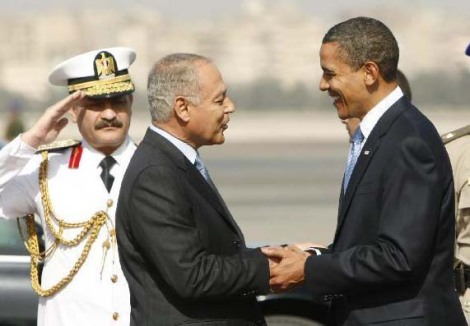 This was a statement by Egyptian Foreign Minister Ahmed Abul Gheit on Nile-TV. It was made on the «Round table show».

MILLIONS of readers have been free to believe all of the evidence – in whole, in part, or not at all – which has been presented and stipulated at this blog: incontrovertibly, Barack HUSSEIN Obama is not only a Muslim, but a clear and present danger to America. By extension, as the leader of the free world, his proven anti-Americanism is a direct threat to western civilization. In other words, without America’s beacon for freedom, well, the west’s lights will eventually extinguish. Let’s not pretend what is isn’t.

YET, for clarity sake, let us recap to see what shakes out. Moreover, readers can decide if America’s domestic upheavals and attendant Mid East fires have become clearer and more focused. Gauge for yourselves wherein lies Obama’s hand(s).

ONE’s roots, like it or not, do matter, especially if steeped in two anti-American worlds – green and red. So, from the paternal side, Obama’s Wahhabi lineage is integral to swirling Mid East wildfires.  Attendant U.S. blow back is coming full circle.

ON the maternal side, his Marxist/communist revolutionary roots have been wrecking havoc on the domestic front, since his catapult into office.

Due to the above – and so much more – the case for impeachment has been growing and becoming more urgent. Most recently, the illegal release of Taliban killers – in exchange for an anti-American soldier – rises to many levels of treason. You just gotta connect the countless dots, instead of throwing up your hands.

NEVERTHELESS, the following is a brief rendering of all the heretofore proofs found at this blog, but in bullet-proof form. This investigative journalist advises others to imbibe said truths:

To Save America: Barack Obama Must Be Impeached

Barack Obama  has repeatedly violated his oath of office which states: “I do solemnly swear (or affirm) that I will faithfully execute the Office of President of the United States, and will to the best of my Ability, preserve, protect and defend the Constitution of the United States.”

1)    The mere fact that Mr. Obama is a self-professed Muslim means he is dedicated to a creed that regards all non-Muslims as “infidels” whose lives, therefore, are not inviolable.

2)    At least 19 Muslims were involved in the September 11, 2001 destruction of the World Trade Center, which resulted in the cruel death of almost 3,000 men, women, and children .

3)    The mere fact that Mr. Obama is a self-professed Muslim means that he, cannot faithfully fulfill his oath of office, which requires him to “protect and defend the Constitution of the United States.” In proof of this conclusion, let facts be submitted to a candid world:

● President Obama appointed as CIA Director John Brennan, a convert to Islam who refused to put his hand on a Bible when sworn into office,

● President Obama has prohibited members of his Administration from making statements associating Muslims with terrorism, despite the fact that Muslims are unequalled in their worldwide acts of killing innocent men, women and children. These acts oblige Mr. Obama to cease obfuscating Muslim terrorism, since this contradicts his oath to “preserve, protect and defend the Constitution of the United States.”

I invite experts in American Constitutional Law to specify other acts of President Obama, such as abuses of executive power, which justify his impeachment.

IS the above unparalleled conflict in interest – between the leader of the free world and that which he truly pledges allegiance to – still unclear?

MOST inherently, the more succinctly one can state the case for impeachment, the more resonance it will have. As such, pay Professor Paul Eidelberg’s warning(s) forward via any possible avenue; be it social media, professional or personal domains. Everyone who cares about western freedoms must rise to the challenge, for EACH day reminds afresh of the significant dangers we face from an out of control anti-American POTUS:

The federal government is spending nearly $1 million to create an online database that will track “misinformation” and hate speech on Twitter.

The National Science Foundation is financing the creation of a web service that will monitor “suspicious memes” and what it considers “false and misleading ideas,” with a major focus on political activity online.

The “Truthy” database, created by researchers at Indiana University, is designed to “detect political smears, astroturfing, misinformation, and other social pollution.”

The university has received $919,917 so far for the project.

“The project stands to benefit both the research community and the public significantly,” the grant states. “Our data will be made available via [application programming interfaces] APIs and include information on meme propagation networks, statistical data, and relevant user and content features.”

“The open-source platform we develop will be made publicly available and will be extensible to ever more research areas as a greater preponderance of human activities are replicated online,” it continues. “Additionally, we will create a web service open to the public for monitoring trends, bursts, and suspicious memes.”

“This service could mitigate the diffusion of false and misleading ideas, detect hate speech and subversive propaganda, and assist in the preservation of open debate,” the grant said.

“Truthy,” which gets its name from Stephen Colbert, will catalog how information is spread on Twitter, including political campaigns.

“While the vast majority of memes arise in a perfectly organic manner, driven by the complex mechanisms of life on the Web, some are engineered by the shady machinery of high-profile congressional campaigns,” according to the website.

Menczer, a professor of informatics and computer science at Indiana University, links to each of the organizations on his personal page from his bio at the Center for Complex Networks and Systems Research.

The government-funded researchers hope that the public will use their tool in the future to report on other Twitter users.

“Truthy uses a sophisticated combination of text and data mining, social network analysis, and complex networks models,” the website adds. “To train our algorithms, we leverage crowdsourcing: we rely on users like you to flag injections of forged grass-roots activity. Therefore, click on the Truthy button when you see a suspicious meme!”

The project also seeks to discover why certain Internet memes go viral and others do not. Funding is not expected to expire until June 30, 2015.

YES, Orwell’s universe has been stepped up by Obama Inc. and his foot soldiers, in expectation of FINALLY bringing down America. The shredding of the Constitution – from wherein America’s ethos and foundations are derived/housed – is a prime target for Barack HUSSEIN Obama’s (and surrogates) plans. Almost decimated…

7 thoughts on “Obama’s Impeachment Can Save Western Civilization From Implosion: A Justifiable Case…Commentary By Adina Kutnicki”