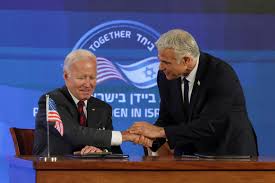 POLITICAL opportunists are endemic within all nations. However, when it comes to Israel — the tiny nation-state of the Jewish people within the belly of the Islamic beast — well, they run amok.

THERE are core reasons for this political disaster. Primarily, this is so because of an entirely unaccountable political system; a quagmire of self-interested power brokers, that is, in total defiance of the will of the majority voting public. But to understand what’s what,

NOW, there are certain times when it is possible to ignore the blow-hards at the tippy top — this is NOT one. In NO uncertain terms, Lapid’s utterances will present a clear and present danger to the security of Israel. Full-stop.

VIA his prepared support at the UN for a so-called “two-state solution” — through the declaration of a PA (terror) state — said hallucinatory words stand in direct opposition to decades-long reality on the ground.

INCONTESTABLY, as is said, the proof is in the pudding. Atop the wreckage of countless mangled and dead Jews (alongside others caught in the cross-fire) who have littered the streets throughout Israel, the bloody toll leads directly to Rabin’s acceptance of the infamous Oslo Peace (Death) Accords (Sept. 1993). It should require little edification. But, if it does,

ALAS, come what may, with all of the unvarnished truths revealed via the above, why in the world would Lapid (a “caretaker” PM, until the slated Nov. elections, no less) feel compelled to inflict such (provable) injurious harm upon the people he is purportedly sworn to protect?

WELL, as a die-hard leftist he is in sync with the radical left in the U.S. This is the damnable truth. Currying their favor takes precedence, all his protestations beside the point. In fact, it is no accident that another global interview in Nov. 2017 stated the following (at the bottom half of the interview) within the below excerpted geo-strategic/security assessment:

Indeed, it is hardly news that many politicians (in Israel, America and elsewhere) get where they are through connections. Within Israel it is termed “protectzia”. In fact, Yair Lapid, Israel’s Financial Minister, is one of its best poster boys and this is not due to his matinee idol good looks. Assuredly, he climbed atop his father’s coattails, former MK “Tommy” Lapid, to rise to the top echelons of Israel’s decision-makers. Mind you, this is a man who dropped out of high school and never even earned his “bagrut”, Israel’s high school matriculation qualifier. Not one to mince words, the question becomes: what qualifies him to be Finance Minister, or Minister of anything, if I may be so blunt? Frankly, it is akin to appointing a blind man to an air traffic controller position, and as a Director over all flight controllers no less. Sheesh.

Such is the tragic state of Israel’s “strategic” affairs, always leading its majority Zionist public, year after year, into an increasingly worsening “matzav”.

BACK to today’s looming UN disaster,

It would mark the first time an Israeli prime minister has declared support for a two state solution at the UN.

Prime Minister Yair Lapid is expected to announce his support for the establishment of a Palestinian State during his speech to the UN General Assembly on Thursday, Israel’s Arutz 7 website reported citing a source close to the Israeli premier.

The endorsement will mark the first time an Israeli prime minister has called for the two state solution at the UN.

The source acknowledged that there was pressure from the Biden administration to public endorse the two state solution, but added that “Israeli security policy will be determined by Israel.”

“Support for the two-state solution is … best for the State of Israel. The greatest danger we face is one state,” Arutz 7 cited the source as saying.

During his address to the UNGA on Wednesday, President Joe Biden also endorsed the two state solution, saying that the Palestinians were “entitled” to their own state, and that it was the only way to ensure Israel’s security going forward.

“We will continue to advocate for a lasting, negotiated peace between the Jewish and democratic state of Israel and the Palestinian people,” Biden told the UN General Assembly.

“The United States is committed to Israel’s security. Full stop. And a negotiated two state solution remains our best way to ensure Israel’s security and prosperity for the future and give the Palestinians the state to which they are entitled,” he said.

Palestinian Authority President Mahmoud Abbas is also slated to address the GA on Thursday, and is expected to call for the UN to grant the Palestinians full-member status at the global body.

THE more things change, the more they stay the same. So, for the umpteenth time, let’s set the record straight:

Lapid, a “pretty-boy” who never graduated from high school; who rode the coat-tails of his papa, MK “Tommy” Lapid, to reach the inner recesses of an unaccountable legislative hall; an otherwise know-nothing, do-nothing, former tv “talking head” beneficiary of Israeli “protectzia”, is it any wonder that he will wreck untold disaster upon the nation, mind you, weeks before another ! election??

NOT FROM THIS CLUED-IN PERCH!!