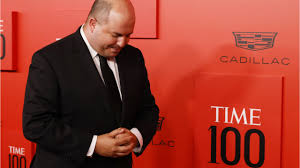 THE crime of pedophilia is akin to none other; the crime of all crimes! Its poisons have a ripple-down effect, that is, from generation to generation — for the victims never fully recover from said dastardly, criminal deviance. As such, in one way or another, it amounts to a life-time sentence for the victim. For example,

and on and on the traumas reverberate. Never-ending.

IN this regard, last month, a decision was taken by JAG,

and off they went to snatch up the most high profile pedos, mostly, in political, media,  entertainment, and associated circles thereof. Beforehand, others were scooped up, but with pedo charges tacked atop treason and other piggyback national security offenses.

AND it is the above stand-alone charge, crimes against the kiddies, that led to the initial arrest of Brian Stelter, a/k/a Humpty-Dumpty! Alas, JAG operators paid this most arrogant cretin a “knock-knock” and the rest is JAG JUSTICE-STYLE!

A military tribunal on Monday found former CNN host Brian Stelter guilty of child molestation and possession of child pornography, and, owing to Stelter’s unrepentant nature and failure to grasp the gravity of his crimes, recommended he be hanged by the neck until dead.

As reported previously, U.S. JAG investigators arrested Stelter outside his New York City condominium on August 27. At the time of his capture, Stelter had been carrying a laptop holding a plethora of inappropriate images of children.

In an opening statement Monday morning, Vice Admiral Darse E. Crandall said JAG’s evidence would prove conclusively that Stelter was a serial pedophile who impulsively fondled young boys during his tenure at CNN. JAG, he said, had sworn statements from 8 minors alleging Stelter had confronted them in isolated areas and, wearing a sheepish grin, touched or fondled their genitals. Although no statement mentioned penetration or sodomy, all the statements told eerily comparable stories on how Stelter had targeted specific children that caught his eye.

“I submit to you,” Vice Adm. Crandall addressed the 3-officer panel, “that no child would ever be safe around detainee Stelter. You’re going to hear him say touching and rape are disparate offenses. But I say his groping of young boys is a ‘gateway’ crime. We know that adult serial killers often tortured, mutilated, and killed small animals long before they set their eyes on human prey. Left unchecked, the detainee’s crimes would most assuredly escalate eventually, once he finds the right persons and situations to carry them out.”

Sitting alone at the defense table, Stelter, wearing an oversized jumpsuit and handcuffs, grinned and giggled. He asked permission to speak.

“I’ve committed no crimes,” Stelter began. “You have the nerve to label me a pedophile, a gross misrepresentation of the truth. I identify as a MAP, a minor attracted person; it’s a lifestyle choice, not a crime. In a few years, maybe sooner, laws will be passed protecting MAPs everywhere—”

“—Not if we have anything to say about it,” Vice Adm. Crandall cut him off.

He showed the panel the victims’ depositions, as well as blurred-out images from Stelter’s laptop. The panel also saw cellphone video and audio taken by a 13-year-old boy identified as Adam, whom Stelter molested while visiting a NYC elementary school in January.

“I appreciate speedy cases, detainee Stelter. You’re repulsive, and I really don’t enjoy being around you. Just so we’re clear: Are you admitting to crimes you’ve been charged with? We have three of your victims on standby, alongside their parents, to testify remotely if needed. But I’d rather spare them the horror of looking at you again,” Vice Adm. Crandall said.

Stelter evaded the question. “Have you heard of NAMBLA—North American Man-Boy Love Association? MAP is an extension of it. We’re everywhere. What’s that phrase you guys are so fond of saying? The storm is coming, is it? Well, our storm is coming, and it will be a typhoon.”

After a lengthy back-and-forth that went nowhere, the panel said it had heard enough. Subjecting the witnesses to Stelter’s perverse prattle, they said, would be counterproductive and injurious to the children, all of whom were still minors.

Vice Adm. Crandall recommended Stelter spend the rest of his life incarcerated at Guantanamo Bay, but the panel, in an unprecedented move, disagreed with the admiral’s punishment, saying Stelter should be executed for his crimes.

The highest-ranking officer on the panel, a Marine Corps major, said Stelter’s absence of remorse and lack of accountability ought to affect sentencing.  “With respect, Admiral Crandall, why spend money and manpower keeping this remorseless monster alive?” he asked.

Vice Adm. Crandall furrowed his brow, seemingly pondering the question. After a moment, he nodded. “I’ll go along with this tribunal’s recommendation, sentence to be carried out on Friday, September 23.”

The website is undergoing modifications and formatting that may cause it to temporarily render wonkily. As many know, when RRN launched two years ago, we had an AdSense account that allowed us to earn revenue through ad serving. When Google began cancelling sites that challenged the 2020 election results, RRN was caught in the mix and canceled. After that, we turned to our loyal readers to help us stay afloat; many generous persons gave donations, large and small, and for that we are thankful. We have always been in search of other advertisers to work with, but for conservative sites, they are few and far between. We may have found one. We don’t know how it will turn out. If the ads work and are profitable, we will naturally stop soliciting donations. In the meantime, we certainly appreciate those who continue supporting us. In these perilous times, every dollar helps.