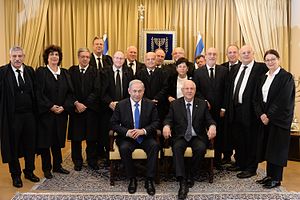 AKIN to (evil) twins separated at birth, the radical left in the U.S. and Israel know no bounds. They are above the law. Unaccountable.

LIKE banshees, both shriek about “saving democracy”, meanwhile, said radicals subvert democratic norms by trampling across the elected legislative process. In fact, crooked/China/dementia Joe clearly exhibited the aforementioned with his bizarre rant, and insane attack on half of the population, Sept. 1, 2002. Meanwhile, he was flanked by a Satan-like backdrop. Chilling.

AS per their Supreme Court comrades in Israel, well, mirror images spring to mind — more than self-anointed. Transparency, what the hell is that? Self-selected, more than foxes-in-the-hen-house!

NOW, none of the aforementioned is new under the sun. It is pernicious, endemic, and entrenched for many decades. As analyzed November 2016,

CASE CLOSED? NOT SO FAST!

The Israeli High Court did not charge into the political arena in order to save the people from a tyrannical government. It did not flagrantly intervene because human liberties were threatened. No despotic leader canceled general elections, thereby demanding some special judicial response. In short, the explanation is simple: the justices were intent to set the national agenda in Israeli society.

The court demonstrated moral arrogance, intellectual haughtiness, and ideological partisanship. Its leading lights acted like a smug elite, enlightened in its own eyes, without inherent responsibility for the country and accountability to anyone, arrogating power without possessing authority.

The great struggle in political history between the Crown and the Commons in British history was ultimately resolved with the primacy of Parliament over the executive power. In Israel, the clash takes on a different character. The idea that appointed judges/justices be the final arbiter in national affairs is politically heinous. It signifies a subversion of the people’s rights and their democratic choices. It is a humiliation to the legitimate government.

That the parliament – Israel’s Knesset – willingly or blindly ceded its power and primacy is a historic deviance in the annals of politics. There was no constitutional foundation for doing so. It represents an abandonment of liberty whose locus is the popularly elected legislature.

This is in fact what happened in 1992, when a law handed the court the possibility to overturn legislation and executive decisions in the name of human dignity and liberty. Now that Israel has witnessed the crushing of the people’s will – which is the core of the democratic covenant – it now remains for their representatives to conduct a corrective revolution, peaceful but firm.

No logic or morality justifies a situation where fifteen appointees to the court exercise power that more than four and a half million Israeli voters and 120 Members of Knesset do not possess. This political perversion is intolerable. That the Knesset passes laws and the government makes policy is a political norm; only some gross and evidential breach of laws or an immediate danger to the national interest can tolerate judicial intrusion in the politics and laws of the country.

When court intervention would be justifiable, as in denying evidence obtained through torture investigative methods against non-threatening suspects, it has chosen to keep silent. In contrast, the judges sitting as a Bagatz appeal tribunal repeatedly usurped power from the responsible executive and legislative branches of government on many crucial issues of the utmost national importance – dealing with Palestinian terrorists, African infiltrators, Jewish settlements, religious controversies, social rifts, military decisions, and army enlistment. The court took a side and neutralized the organs of government.

Abstract principles and formal rights often replace broader and otherwise substantive considerations in the halls of justice. Israel founded on a national vision resting upon history and tradition is not an amorphous mixture of peoples, but the political expression of the Jewish people in their homeland.

Divorced from this composite understanding of Israel’s raison d’être, formalistic-legalistic criteria of justice lose their moral moorings. Moreover, the leftist hegemonic bias of the court on highly controversial matters, while detached from the values and concerns of the majority of the Israeli people, further damages the credibility and legitimacy of court rulings.

The Israeli process for choosing the court is not a public or televised event. It is virtually secretive in character, behind closed doors, no monitoring, overview, or review undertaken. This is rather astounding in a political era promoting transparency and visibility. A nine-member Judicial Selection Committee, three members of which are justices on the court, fills vacancies and chooses the 15-member Supreme Court. Shades of cooptation and an air of furtive collaboration sours the political atmosphere and proceedings.

The time is long in coming to launch a thorough reform of the judicial system and the mechanics of its composition. Returning power to the people and rescuing the country’s democracy are themes of urgency to resolve a contentious failing in the politics and government of Israel.

The upcoming November 1 elections will hopefully lead to the change many Israelis desire.

2 thoughts on “Saving Democracy in Israel”