WITH 24/7 news cycle propagandists fueling the Russian-Ukraine war, and, with it, a steady drumbeat emanating from deep state globalists pulling the strings in America (and throughout the so-called democratic west), it is no wonder that countless can’t separate fact from fiction. Indeed, a beyond mild assessment and descriptor. 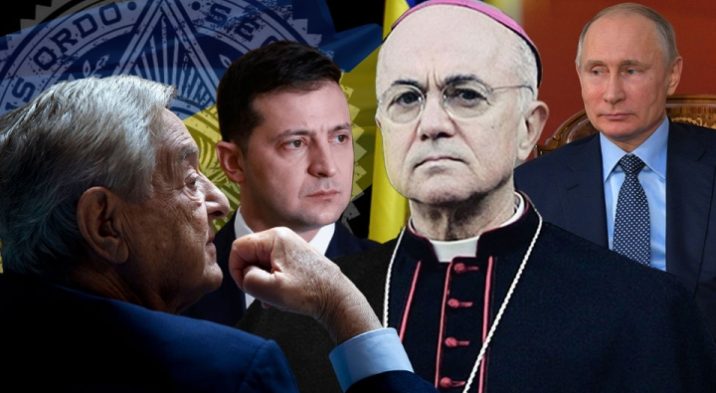 TO said end, every now and again, along comes not only a voice of reason, but one whose moral rectitude is not driven by ill willed puppeteers — and then some. As such, it is more than advisable to absorb, yes, to imbibe, the following sobering analysis. Doing so, in no small measure, will dispel the fog of war.

MARK these words: History will prove their veracity.

BUT alongside the aforementioned truth-telling and wisdom, the following recaps serve as devastating indictments and backgrounders, that is, in the furtherance of today’s update.

ONWARD and upward. For as inferred from the get-go, all is NOT as the spin-meisters weave!

Pedophile rings across Ukraine have been taking advantage of “humanitarian corridors” meant to allow safe egress for innocent Ukrainians caught amid Vladimir Putin’s war against the child traffickers and bioterrorists that have long thrived in what he has called “a morally bankrupt state.”

The Russian leader and President Donald J. Trump spoke again Saturday, with Putin giving updates on his battle against “despotic forces.” He said he was burdened heavily with knowledge that “some” innocent bystanders were killed in crossfire between the Russian and Ukrainian armies, but he doubled down on his assertion that Volodymyr Zelenskyy had, and still has, the ability to singlehandedly end the conflict and prevent needless fatalities on either side.

Putin told Trump his forces had “pummeled to dust” all known foreign bioweapon labs in Ukraine, but also said that many scientists responsible for developing bioweapon programs had escaped the shelling and are now receiving Zelenskyy’s protection.

According to a Mar-a-Lago source privy to the conversations, Putin rattled off the names of 27 scientists—an increase from our last report–from 9 countries who had spearheaded weaponization programs on everything from Marburg Hemorrhagic Fever to Ebola to aerosolized airborne rabies, the latter of which could have plunged the world into a true zombie apocalypse. Putin accused Zelenskyy of harboring fugitives for whom the Russian “Krestovyy pokhod za russkuyu pravdu,” or Russian Truth Crusade, had issued military arrest warrants.

“From what we understand, it’s their loose equivalent of what we call ‘white hats,’ Russian nationalists dedicated to purging Russia and Eastern Europe of what they consider to be ungodly or evil Western influence. Putin wants those scientists and bioengineers accounted for, and, yes, some are American citizens, or so he’s said. He told Trump a few might have escaped to neighboring countries, but most are still in Ukraine. At least according to Putin, Zelenskyy got a list of the names and was told to surrender them or account for their whereabouts. But Zelenskyy denied he ever heard of them,” our source said.

The FSB, Russia’s Federal Security Service, proved beyond doubt that Zelenskyy and his cronies had received substantial payments in exchange for protection, Putin said to Trump.

“These dogs, I will have them, President Trump. I know the efforts made by you against the Deep State. And we know this evil is not just in the U.S.; tentacles spread everywhere.  How would you act in my shoes?” Putin reportedly told Trump.

“There are things I can’t say right now, big things, but President Putin, I know why you’re doing what you’re doing,” Trump replied.

Putin also updated Trump on the child trafficking dilemma that had for decades plagued the Ukrainian countryside.  He told Trump that Russian Special Forces had liberated an additional 1,600 imprisoned children from “dens of filth” and killed the traffickers guarding them. However, he said an unknown number of child traffickers were exploiting the “humanitarian corridors” he had created so innocent Ukrainians could flee the Ukraine for refuge in adjoining countries.

Russian border security, he said, stopped a Ukrainian couple—a man and a woman in their 40s—accompanied by 6 children who were trying to cross into Belarus. The “family” aroused suspicion because 4 of the 6 children neither looked Ukrainian nor spoke the language. An investigation into their backgrounds revealed that the adults were suspected child traffickers with Interpol arrest warrants in their names, whereas the children were helpless victims of the crime syndicate.

Elsewhere, the Russian military stopped a train enroute from Kyiv to the border city of Uzhhorod after receiving credible tips saying the train held mostly children and few adults. The six adults were a mix of Ukrainian and Albanian bad actors who claimed to be schoolteachers escorting students to safety.

“President Trump, 67 children taken off that train, 67 from many countries, many Russian children. In interviews they said they were kidnapped, and the fake teachers had no credentials, no papers. These filths are trying to take children now to other countries to sell them, since we are stopping them here,” Putin told Trump.

“I understand. Pedophiles and traffickers should get no mercy. I’ve been trying hard, very hard, to get rid of them in the U.S. Even a hanging, President Putin, is too good for them,” Trump replied.

The call ended with Putin again denouncing stories about Russian brutality and 1,000 loses per day as CIA-created propaganda.