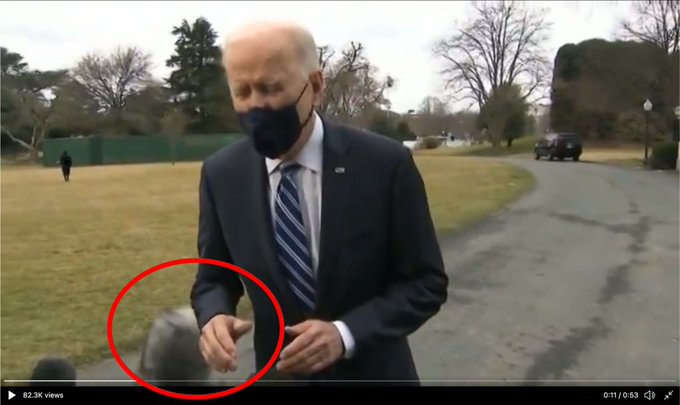 NEVER and never will this investigative journalist — for that matter, others whose eyes are wide open and capable of seeing from there to here — convince those who are wedded to the radical left narrative that all is as it seems. Lost causes.

BUT that doesn’t mean that pretending what is isn’t is the way forward. To the contrary. As is often the case, the path of least resistance can be very deadly. History attests as much.

ALONG this very same trajectory of due diligence (there are too many to cite), that is, from others whose watchful eyes remain glued to the truth, come what may, the following is linked for further edification. Deliberation.

On Wednesday at the G7 Summit in Helsinki, Joseph R. Biden met his Russian counterpart, Vladimir Putin, for the first time since illegitimately taking office on January 20. However, persons involved in the Deep State purge are convinced that the man who met Putin was not Biden at all, but rather a body double wearing a prosthetic mask that perfectly mimicked Biden’s countenance.

A Mar-a-Lago source speaking under promise of anonymity told Real Raw News that the real Joseph R. Biden could not have attended the meeting—or the summit—because he has been hospitalized at Walter Reed Medical Center since June 1, when he purportedly had a massive stroke that left him(even more) feeble and paralyzed below the waist. Our source said Biden’s faux administration and the mainstream media have conspired to hide Biden’s illness while deciding whether to instate Kamala Harris as president or pass the presidential reigns to someone else.

“Donald Trump obtained a copy of the meeting, and his team rigorously scrutinized it. The guy looked like Biden, sounded like Biden, walked like Biden, talked Like Biden. But it wasn’t Biden. Careful examination of the video showed the double had a small earpiece each ear. One was likely for Russian translation, and the other probably got instructions what to say,” our source said.

Asked to speculate why, if Biden’s health is gravely compromised, the Deep State hadn’t invoked the 25th Amendment and sent Harris to Helsinki, our source made the following observation: “Because they know that Putin would never, ever, not in a million years, accept Harris as a person of authority. If they paraded her out, he would taken it as a personal slight. Mind you, using an actor was a huge risk. Putin is no dullard. He’s former KGB. But the body double was apparently taught Biden’s mannerisms very well, and it fooled Putin. If they can fool him, imagine how easy it is to fool so many Americans, especially with the MSM on their side.”

Moreover, Trump’s team has reportedly identified the body double. He is 82-year-old Arthur Roberts, a C-grade actor whose greatest claim to fame was portraying the evil ninja, Braden, in the 1983 martial arts film Revenge of the Ninja. Our source would not expound on how Trump’s people arrived at that conclusion but said they believe that Biden has several facsimiles. Although Roberts’ IMDB page lists his height at 6-foot-2, in 1995 he suffered a severe spinal compression injury that reduced his height by approximately 2 inches. Joseph Biden is reportedly six feet tall.

“Trump has very good evidence that Biden’s still in the hospital and under Secret Service and FBI guard. The Deep State’s problem is its overconfidence—thinks it’s invincible. But it’s only a matter of time, getting shorter, before all this comes to light,” our source said.